Australia, the United States, Japan and India will deepen their cooperation on countering cyber attacks and disinformation, after a high-level meeting of foreign ministers in Tokyo where China's growing assertiveness dominated the agenda.

Australian Foreign Minister Marise Payne also agreed with her counterparts to better work together on protecting critical technology and minerals, and uphold maritime security in the region, as an alternative to relying on China. 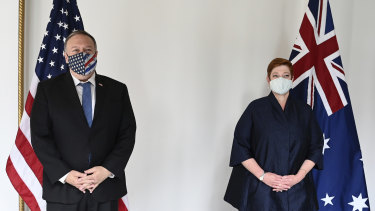 US Secretary of State Mike Pompeo and Australian Foreign Minister Marise Payne pose for a photo prior to their bilateral meeting in Tokyo.Credit:AP

Speaking before the meeting on Tuesday, US Secretary of State Mike Pompeo hit out at the Chinese Communist Party's initial "cover-up" of the coronavirus, which he said made the pandemic worse than it would have otherwise been.

Mr Pompeo said the “Quad” alliance between the four countries, which has angered Beijing, was a testament to the "enduring power of democracy to bring free peoples together".

"Our partnership isn't multilateralism for the sake of it," he said.

"When we met now last year, the landscape was very different, we couldn't have imagined the pandemic that came from Wuhan."

"That crisis was made definitely worse by the Chinese Communist Party's cover up. The regime's authoritarian nature led its leaders to lock up and silence the very brave Chinese citizens who were raising the alarm."

"As partners in this Quad, it is more critical now than ever that we collaborate to protect our people and partners form the CCP's exploitation, corruption and coercion."

Senator Payne said the Quad countries believed in a region "governed by rules, not power".

She said the four countries discussed ways to help each other develop domestic critical minerals processing industries and need to develop local industries that can supply critical technologies.

Australia was the first of the countries to ban Chinese telco Huawei from next-generation networks, but the three other countries have followed in introducing some kind of restriction on the tech giant.

"Ministers agreed on the importance of strengthening the resilience of regional supply chains, key cyber-enabled systems and critical infrastructure."

"To this end, we emphasised the importance of quality infrastructure investment as a driver of strong, sustainable, balanced and inclusive economic growth, which will be critical to supporting the region’s economic recovery."

Senator Payne said the ministers also agreed to strengthen cooperation with other countries "including in the Mekong sub-region" – in a sign that the four nations are looking to deepen their alliance with China's neighbour Vietnam.

The ministers also discussed measures to counter disinformation campaigns by authoritarian states, amid concern about the way in which China has used social media to undermine democracies across the region during the global pandemic.

She will continue meetings in Tokyo on Wednesday, before stopping off in Singapore for talks with its foreign minister Vivian Balakrishnanon on Thursday.