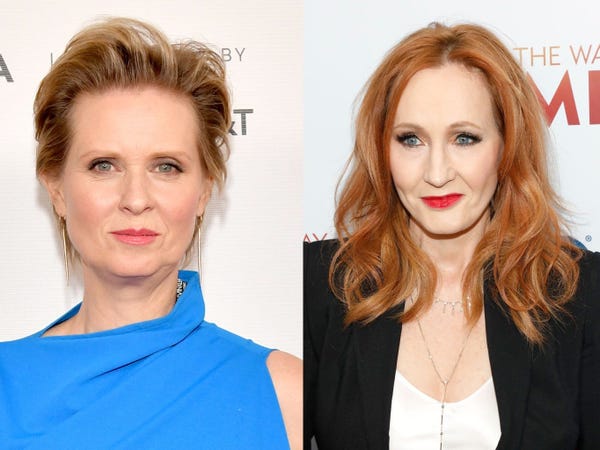 Rowling self-published an essay in June defending her views on transgender people, which many said was transphobic. The essay, which swept the internet, included a since-debunked argument that an "explosion" of young women are de-transitioning.

Soon after, Rowling posted a tweet mocking a publication for using the term "people who menstruate," as a way to be inclusive of people who are not women who have periods. Rowling shared the article, with a comment: "I'm sure there used to be a word for those people. Someone help me out. Wumben? Wimpund? Woomud?"

Nixon told The Independent she and Max, her youngest son, are in the midst of a Harry Potter marathon, which made Rowling's statements all the more jarring.

"It was really painful for him because so much of his childhood was tied up with Harry Potter," Nixon told The Independent.

"We're a Harry Potter family. The books seem to be about championing people who are different, so for her to select this one group of people who are obviously different and sort of deny their existence, it's just — it's really baffling. I know she feels like she's standing up for feminism, but I don't get it."

Rowling's recent statements have left many Harry Potter fans at a loss for how to engage with the series now that the mind who birthed it has openly made transphobic remarks.

"The thing that he tried to impart to people was that if you as a queer person or as a non-queer person have found a home in these stories, please don't let this take that away from you," Nixon said. "These are still your stories."

J.K. Rowling wrote a controversial statement about transgender people in response to being called a 'TERF.' Here's what that means.