DAILY MAIL COMMENT: This testing shambles is unforgivable. When will ministers act?

Seduced by a declining daily death toll and cautious optimism among experts, many members of the public may have dared hope that Britain was finally turning a corner on the coronavirus horror.

If so, they were yesterday abruptly disabused of that rose-tinted notion.

On a bleak day, the number of patients dying rocketed by 381 – by some stretch the biggest increase since this tsunami struck our shores.

Thousands more languish in hospital. Dispiritingly, the ONS believes the fatalities could be even higher. How far away seems a return to normal life! 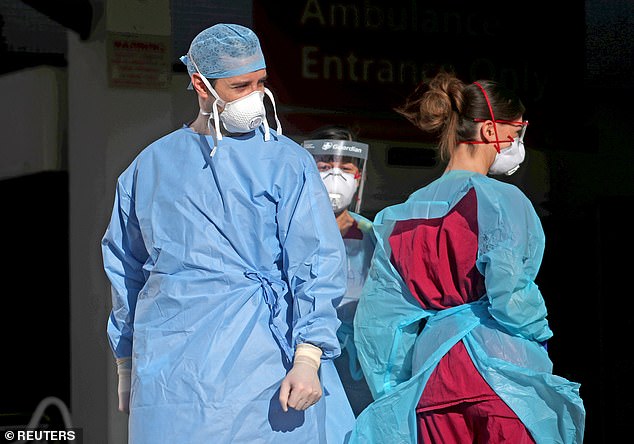 Has the Government done everything possible to crack Covid-19? The Mail reluctantly concludes not. Pictured: Medical staff at St Thomas’ hospital in London on Tuesday

The joyous day when people can pop out unencumbered to see family and friends, or go shopping without encountering empty shelves and Soviet-style queues, or have a pint in a pub, appears impossibly distant.

Of course, the best way to ease the stifling lockdown is to defeat the disease conclusively.

Boris Johnson – himself laid low – insists he is doing everything in his power to achieve this goal. Certainly, the Prime Minister deserves a pat on the back for much of his handling of the crisis – the most serious to hit the globe since the Second World War.

Protecting the UK from the pernicious pathogen is devilishly difficult.

Not only is it the most severe public health scare in living memory, but drastic measures taken to stem the spread – including shutting business and ordering citizens to stay at home – have driven the economy off a cliff.

But has the Government done everything possible to crack Covid-19? The Mail reluctantly concludes not.

By a country mile, the greatest misstep has been the shambles over mass testing. If Britain is to emerge from this nightmare (relatively) quickly, it is vital we ramp up an expansive screening programme. The failure to order enough testing kits is simply unforgiveable. Let’s not beat about the bush: It has left the NHS with one hand tied behind its back.

Early last month, ministers said 10,000 a day would be checked, rising swiftly to 25,000. In fact, the figure stands at a paltry 8,000. One in five doctors and nurses must sit idle because they or a family member have displayed symptoms – even if they’re fit as a fiddle.

Mr Johnson says he is exasperated. Welcome to how the nation feels!

No10 blames a global shortage of kits. Yet it is wilfully perverse that a Southampton-based company is churning out lorry-loads of swabs and shipping them around the world, including to India and the Middle East, while the UK Government dithers.

What in blazes is stopping the Department of Health requisitioning this kit? A conveyor belt of ministers tells us coronavirus is like fighting a war. Shouldn’t they begin to act like it?

Confusion also reigns with ‘game-changing’ antibody tests to show if someone’s immune and safe to return to work. Millions were supposed to be ready last week. Now it could be months.

This is a shocking state of affairs. The Government must appoint as a matter of urgency a dedicated minister for testing – someone given carte blanche to crack the controversy.

Could it be a captain of industry? Perhaps, if the post lasts only a few weeks. After all, during the Second World War, Lord Beaverbrook played a major role as Winston Churchill’s Minister of Aircraft Production.

Or a leading political figure? Jeremy Hunt fits the bill.

He’s a successful businessman and, as the longest-serving Health Secretary, knows his way around Whitehall. The ex-Conservative leadership candidate commands respect.

It’s not as if the Government can’t be decisive. Look at the 4,000-bed specialist hospital that has been built in London’s Docklands in just days – the fifth largest in the world. It is a glowing example of Britain’s can-do spirit.

But this gumption must extend to testing. Until screening is routine, Britain will remain locked down – harming national morale.

Once it is commonplace, the country can finally, gratefully, begin taking steps on the path to a normal life.