Home » Lifestyle » Dan Andrews was having a week from hell. Then Russell Crowe showed up

Dan Andrews was having a week from hell. Then Russell Crowe showed up

Premier Daniel Andrews got a rare vote of confidence this week when Australia’s Hollywood hard man Russell Crowe told his 2.7 million twitter followers the Premier was doing a good job, exhorting Andrews to keep going even if he was “going through hell”.

It certainly was one hell of a week and Rusty’s intervention would have been more welcome for the embattled Premier than that of Jennifer Coate, the retired judge hired by Andrews' government to hold an inquiry into the Melbourne quarantine hotels debacle 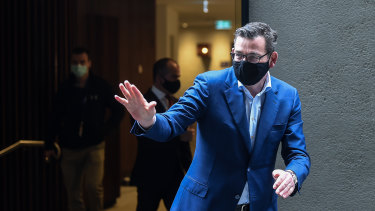 As she announced she had delayed the reporting date of her inquiry until November, Coate added, unprompted, that there was no legal reason to suppress public discussion of matters before her investigation.

Coate’s comments blew away any last vestige of political cover for Andrews and his ministers to bat away questions about the quarantine failures that have led to most (if not all) of Melbourne’s deadly COVID-19 second wave. They have also brought a world of political pain down on Andrews and his government.

The day after Coate’s comments, a ravenous media pack descended on the Premier’s daily press briefing determined that this time they were not to be fobbed off with any of the “let the inquiry do its work” lines that they had heard so often.

Some progress was made. Andrews fell back to a position where no politician is ever comfortable. He couldn’t answer many questions, mostly about what he and his minister knew about the hiring of private security guards for the quarantine hotels, because he simply did not have the answers and that was what the inquiry was for.

“The lines of authority and accountability and exactly what has gone on here, it is not clear,” Andrews said. “I'll be accountable for mistakes that were made, but I don't have the answers. That's why I've set up a proper inquiry to get those answers. We're all entitled to them.”

That position, from someone well known as a hands-on manager, was met with scepticism. But he’s probably entitled to the benefit of the doubt when he says he hasn’t read the 100,000 or so documents Coate expected to come before her inquiry.

The fiery Q&A session also offered a better look of Andrews’ broader strategy with this inquiry. It’s shaping up like this: if one of the ministers is exposed by inquiry, they can’t say they were denied due process.

Andrews also left open on Friday the possibility of finally making public the genomic data that may conclusively show the link between the large COVID-19 clusters that developed in Melbourne’s north and west in late June and early July and the hotels that housed returned travellers.

Andrews was battling on other fronts this week. There were complaints from the big supermarkets and the building sector over Monday’s drastic shutdown of the Victorian economy, forcing backdowns and compromises. The united front with Scott Morrison holds firm, but federal ministers have been openly frustrated with the Victorians.

There were mixed feelings about dragging more than 30 MPs, some of them from the regions, into the Spring Street building as stage four began. But nobody could defend Mikakos’ response, refusing to answer each question put to her in QT and issuing written responses the next day.

The Health Minister’s effort demonstrates why Andrews must shoulder much of the heavy lifting in press conferences and it must be frustrating when some of his better performers, such as Jill Hennessy or Jacinta Allan, are locked away in portfolios with no impact on the pandemic.

All that on top of being the first premier in the history of the state to put 250,000 people out of work at a stroke when he announced stage four business restrictions on Monday. By Wednesday, he would have to front up to the day's horror figures of 15 dead and 725 new cases of the virus.

During this week from hell, the Premier has relied on his greatest strengths, but that doggedness, composure and confidence that gets him through 90-minute press conferences can also be a weakness when he is asked for transparency and accountability.

Whether those attributes will be enough for Andrews’ leadership to recover from these dark days is now the open question.