Premier Daniel Andrews has asked Prime Minister Scott Morrison to quickly release secret sections of a report on the historic conduct of Cardinal George Pell, in the wake of the senior Catholic's acquittal on child sex abuse charges.

The Premier telephoned Mr Morrison on Tuesday night, just hours after the High Court’s decision to quash the cardinal’s conviction and release him from jail, to ask for publication of sections of the report of the Royal Commission into Institutional Responses to Child Sexual Abuse. 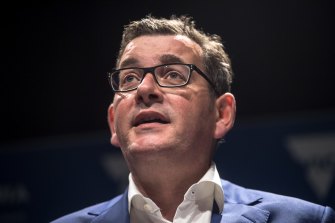 Daniel Andrews called Scott Morrison to ask for the redacted royal commission documents on George Pell to be released.Credit:Justin McManus

The sections relate to Cardinal Pell's handling of allegations of sexual abuse against priests earlier in his career and were left unpublished when the commission reported in September 2017 to avoid prejudice to any of his trials or appeals.

Victorian prosecutors have told the federal government that there are no current or future court cases that might be prejudiced by the full publication of the report but federal Attorney-General Christian Porter says it may be weeks before the material can be made public.

Mr Andrews shrugged off any criticism of Victoria’s courts, whose decisions in the Pell case were overturned dramatically on Tuesday, indicating that there would be no inquiry into the prosecution of the former adviser to the Pope.

But after the successful appeal to the High Court, which meant Cardinal Pell was acquitted of all charges, the Victorian government says there is no reason why the full and un-redacted report of the royal commission cannot be published.

State government sources confirmed on Wednesday that the Premier made a personal appeal to the Prime Minister to publish the sealed sections of the report, that cover Cardinal’s Pell’s time working as a “consultor” to Ballarat ­bishop Ronald Mulkearns in the early 1980s.

Mr Porter says he wants to publish the redacted sections of the report, but on Wednesday he said there were other processes to be followed and full publication was likely to be weeks away.

Mr Andrews also came to the defence on Wednesday of Victoria’s courts, which have been criticised after the High Court overturned both Cardinal Pell’s conviction in the County Court of Victoria and the decision of the state’s Appeals Court to uphold the guilty verdicts.

“I think that [County Court Chief Judge] Peter Kidd has done his job very well and I think that the justice system has worked,” the Premier said.

“I'm not making a value judgment on the case but there are court processes and they can ultimately end in the highest court in the land hearing an appeal and deciding one way or the other.

“I have no reason for concern in terms of the processes of justice in our state.”

The Premier again declined to comment on the High Court's decision.

“Yesterday was a very difficult day and the coming days will be, incredibly challenging, deeply sad, hurtful and difficult for victims of child sexual abuse right across our community,” the Premier said on Wednesday.

“My thoughts are with them and I recommit our government to doing everything we can to support those victims.

“I don't really have much else to say.”