There’s something about Pete! Dating expert reveals what makes the SNL star SO attractive to so many stunning stars – from his ‘vulnerable puppy-dog eyes’ and ‘alpha male’ height to his ‘desirable’ sense of humor

As rumors continue to swirl that Pete Davidson and Kim Kardashian are dating, many people are wondering – how does the SNL star score so many Hollywood ladies?

Now, a dating expert has revealed exclusively to DailyMail.com what really makes the gangly comedian so attractive to so many different women.

Speculation that he and the Keeping up with the Kardashians star were an item first arose after they were seen holding hands on a ride at Knott’s Berry Farm in Buena Park, California, last week. And since then, they’ve been photographed on a series of dinner dates around New York City.

So what is it that makes all these attractive women fall for him? From his ability to make people laugh to the way he wears his heart on his sleeve, Amber Kelleher-Andrews – dating and relationship expert, celebrity matchmaker, and CEO of Kelleher International – said the star has a lot going for him. 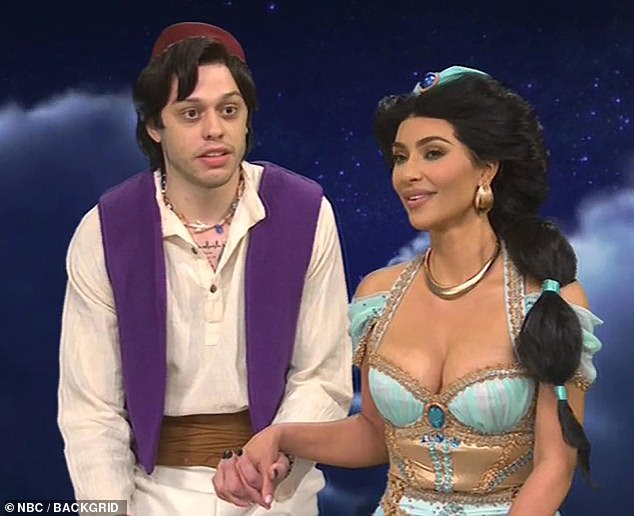 As rumors continue to swirl that Pete Davidson and Kim Kardashian are dating, a relationship expert revealed to MailOnline what really makes the SNL star so attractive to women 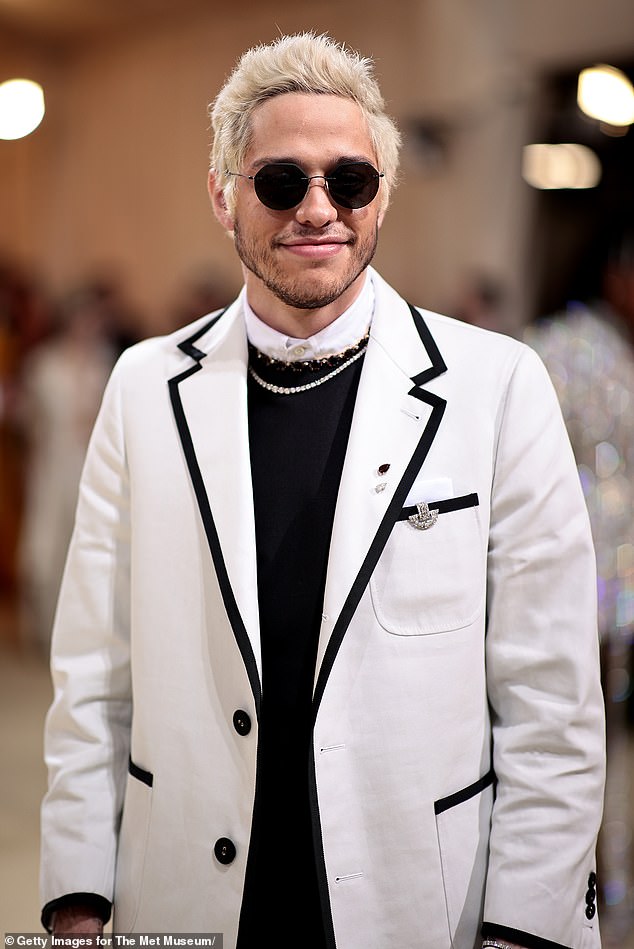 HIS ‘INTELLIGENT’ AND ‘DESIRABLE’ SENSE OF HUMOR

It’s no secret that Pete can write some hilarious jokes, which he showcases every Saturday night on the show. And Amber believes that his sense of humor is most likely an instant draw for women – especially since ‘laughter is the best medicine.’

‘This is not a cliché. If you follow the science, research has proven that our attitude and state of mind is directly related to our overall health and wellness,’ she explained.

‘The International Journal of Medical Sciences, for example, discovered when researching 730 participants between the ages of 18 and 39, that one can physically “laugh yourself into a healthier person.”

‘Similar studies have shown that laughter can improve a person’s lifespan by a whopping 20 per cent.

‘It is linked to higher intelligence, boosts perceptions of confidence, competence, and status.

‘It’s no wonder the leading ladies are drawn to Pete Davidson! Said simply, Pete makes the ladies laugh and this lowers their levels of stress hormones, such as cortisol and adrenaline while concurrently raising their endorphins and dopamine.

‘It’s quite remarkable when you break down the physiology of laughter. Pete’s humor brings joy and happiness to his partners and when they feel great and less stressed, they desire more of him.’

HIS VULNERABILITY AND PUPPY-DOG EYES

But making people laugh on screen isn’t the only thing Pete has going for him. It appears that the writer is just as likeable in real life as he is when cameras are rolling.

Over the years, he’s been pretty open about his mental health issues – in 2017, he revealed that he had borderline personality disorder – and Amber said that she thinks the way he wears his heart on his sleeve attracts more people to him.

‘We all know Pete Davidson as a comedian and his sense of humor definitely plays a major role in his eligibility. That said, not all comedians attract the leading ladies quite like Pete,’ she said.

‘Reason being many famous comedians just aren’t fun to be around. They can be arrogant, sarcastic, intimidating, and guarded.

‘Pete, on the other hand, wears his heart on his sleeve. He has been very open and candid about his difficult past and because of this transparency women are drawn to his innocence.’

She continued, ‘They want to “help” him or “fix” him. It is his cute puppy dog demeanor that gives him a genuine persona making him more relatable.

‘Pete is what I like to call “comfortably charming.” What you see is what you get, and this approachability (especially for type A personalities such as leading ladies) is refreshing.’ 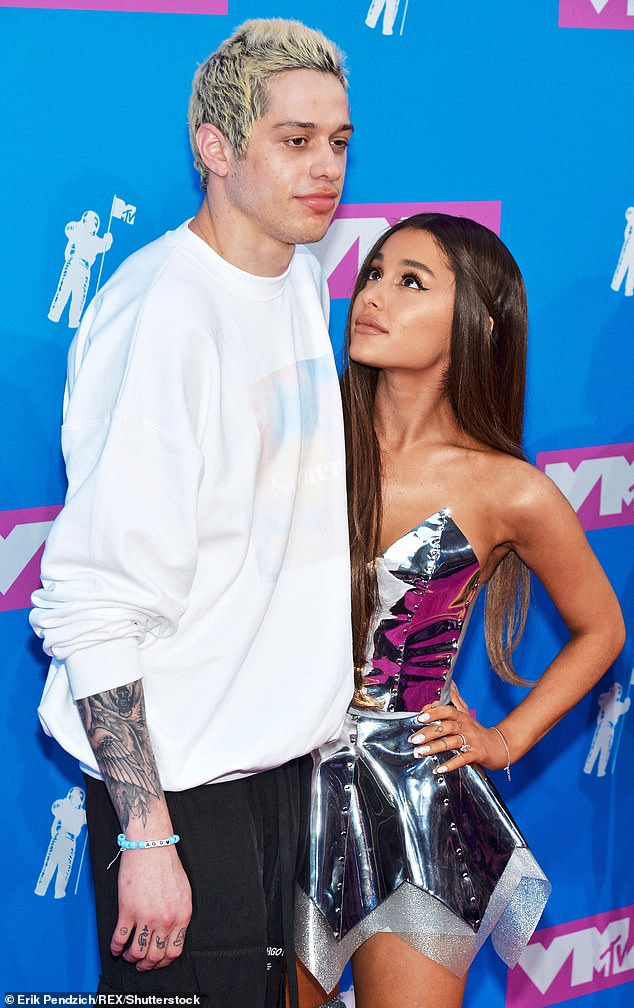 When it comes to his physical looks, she said he has ‘several attractive qualities,’ including his big round eyes, great teeth, genuine smile, and the twinkle in his eye 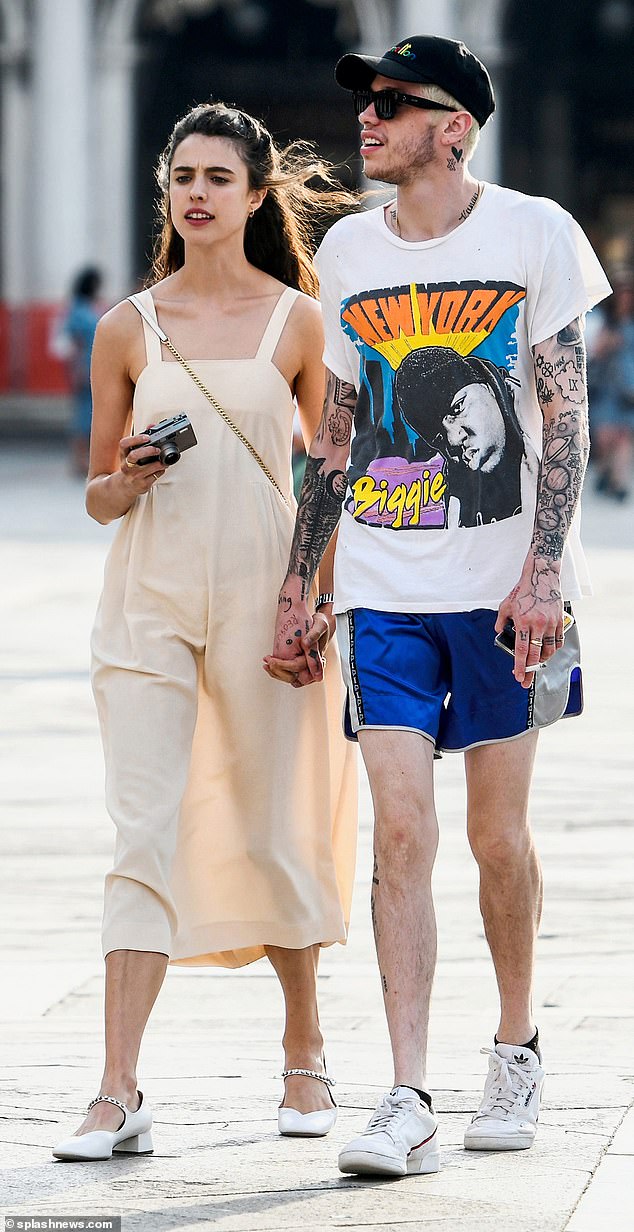 Pete – who is 6’3″ – also has his height going for him. Amber said, ‘Studies show that attraction to taller partners is in our DNA’ 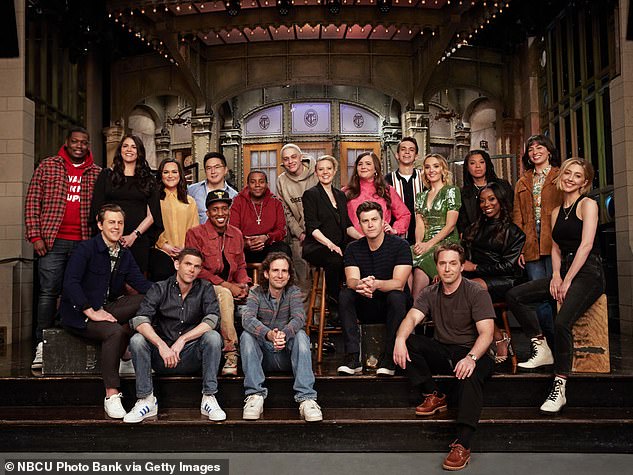 Pete’s celebrity pals: Amber explained that the SNL star’s impressive circle of A-list friends, which he has made through the popular nighttime show, has appeal for many women 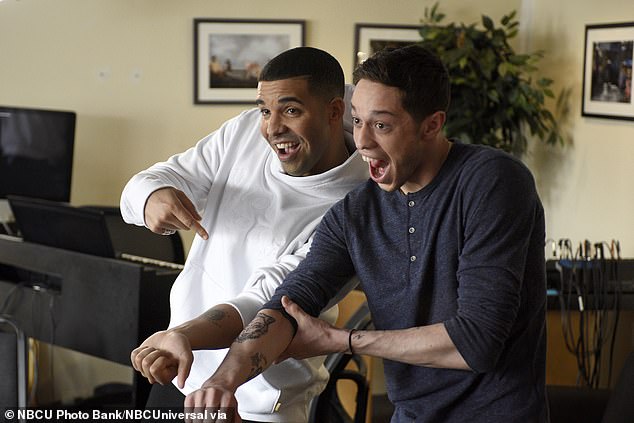 Joker: As well as boasting friendships with his fellow SNL stars, Pete (pictured with Drake) has also met dozens of A-list celebrities who have made guest appearances on the show

HIS IMPRESSIVE CIRCLE OF CELEBRITY FRIENDS

Pete has been working on Saturday Night Live since 2014, and over the years, he’s certainly made a lot of celebrity friends. And according to Amber, that’s a total turn on for Hollywood women.

‘Hollywood and SNL are synonymous with one another, from comedic icons such as Mike Myers, Steve Martin, and Eddie Murphy to box-office mega stars like Will Ferris, Chris Rock, and Adam Sandler,’ she explained.

‘SNL comedians in particular, are brands of themselves and therefore deemed as Hollywood’s golden boys.

‘Pete Davidson has been an official cast member of SNL for many years and like they say, “It’s the company you keep.” His association with these legendary comedians is a huge chick magnet.

‘As a professional matchmaker that works with eligible singles, I know firsthand that single men who have reached mega success in their careers tend to be more attractive than those who have not.

‘Hollywood stardom is even more rare, and Pete Davidson has achieved both.’ 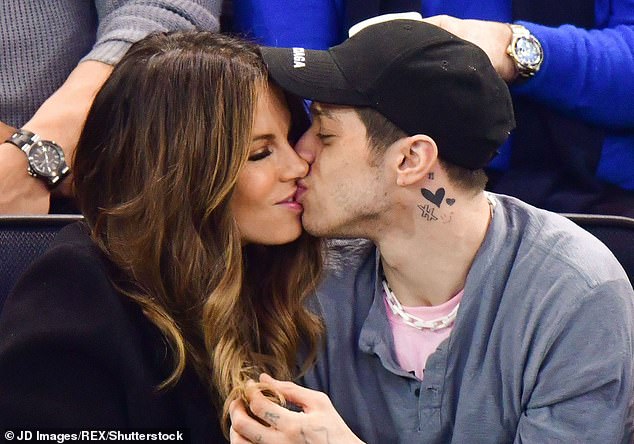 The relationship guru explained that it’s totally in for Hollywood women to date ‘less attractive, lanky, tattooed men’ at the moment 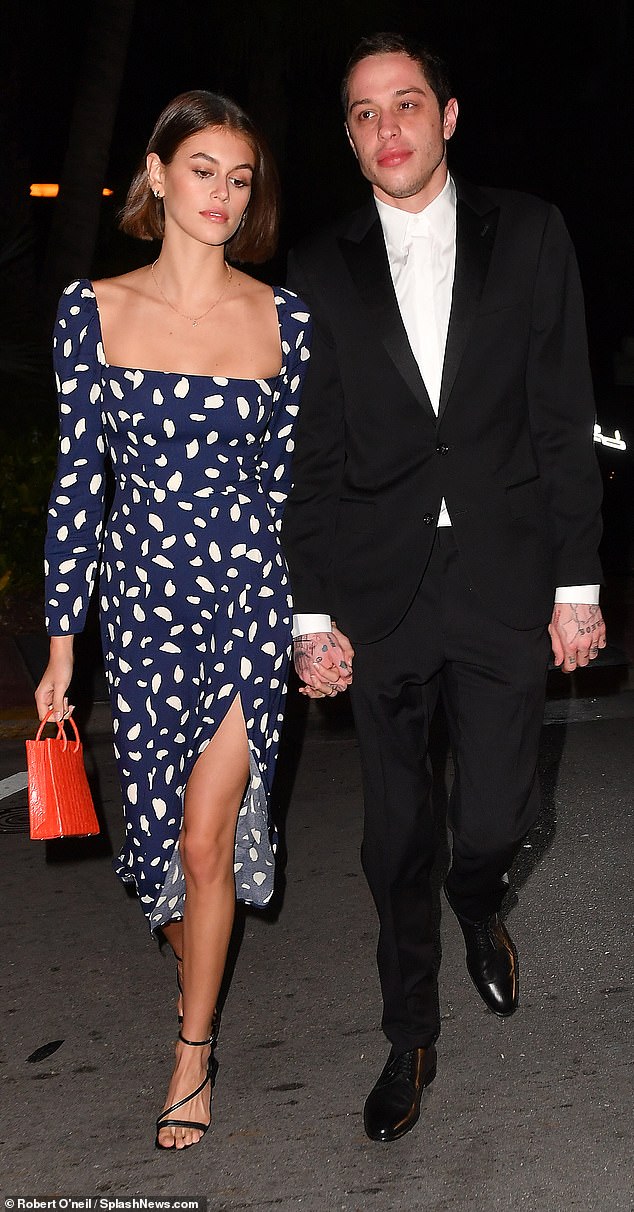 While working at SNL, Pete certainly made a lot of celebrity friends. And according to the dating expert, that’s also a total turn on for Hollywood women

When it comes to his looks, Pete has ‘several attractive qualities,’ Amber said. First and foremost, he’s pretty tall – the star is actually 6’3″, which is bigger than the average man.

She explained, ‘Typically, taller men are considered more attractive than their shorter counterparts.

‘Again, we simply follow the science. Studies show that attraction to taller partners is in our DNA.

‘For example, according to the BBC, taller men are more likely to be chosen for competitive jobs leading to them earning more money.

‘We naturally correlate financial success with “greatness” and “dominance.” When it comes to the birds and the bees, taller men have the advantage.

‘Pete not only makes his leading ladies laugh but he also stands at 6’3” thus naturally displaying this alpha male characteristic.

‘His stature is directly tied to power, strength, and protection. In a nutshell, Pete’s dominance makes the leading ladies feel safe.’

The relationship guru also explained that it’s totally in for Hollywood women to date ‘less attractive’ men at the moment.

‘Pete also has Hollywood’s current trend going for him, which seems to be beautiful leading ladies pairing up with ‘less attractive,’ lanky, tattooed men,’ she said.

She also pointed out that he has ‘big round eyes, great teeth, genuine smile, and a twinkle in his eye.’ 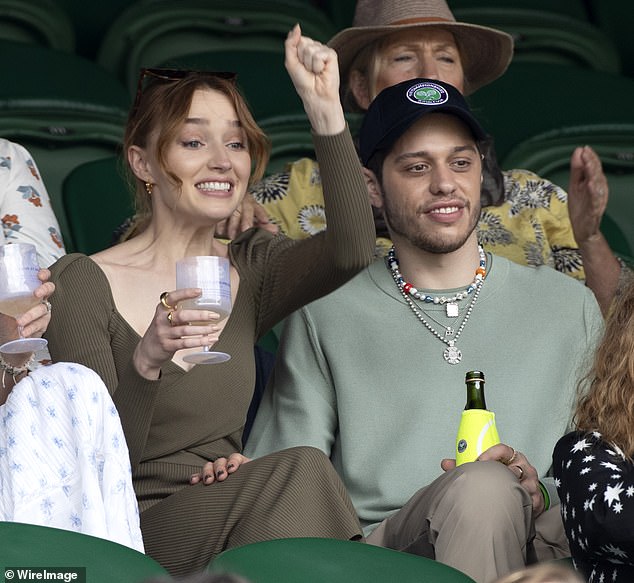 For years, fans have claimed that Pete has what they call ‘big d**k energy.’ And Ariana practically confirmed these rumors when she dropped her Thank U, Next music video.

In the visual, she reenacted scenes from the classic movie Mean Girls. She made a ‘burn book’ just like in the film, and in it, she had a page about each one of her exes.

On Pete’s page, people were quick to notice that she wrote the word ‘huge’ in big, bold letters – possibly referring to his penis size.

Real Housewives of New York City star Bethenny Frankel tweeted in 2019 that she thought Pete ‘shoots diamonds out of his penis,’ after news hit the web that he was dating Kate.

And when speculation around his relationship with Kim started to arise earlier this month, she doubled down on those claims.

‘Years later, I still maintain that Pete Davidson shoots diamonds out of his penis,’ the reality star wrote on Twitter. ‘He needs a deal with @ZalesJewelers (and yes he is talented, charming, smart, and cute) but his game is tight.’

A look back at Pete Davidson’s dating history