Daughter replaces family portraits with crayon drawings one by one

Art attack! Prankster daughter replaces a wall of family photos with crayon copies – and reveals it took her parents 11 days to notice

A girl decided to play a prank on her parents during lockdown – by replacing the family portraits on their living room wall with crayon drawings.

Kristen Vogler, from Massachusetts, who is in quarantine with her parents Paula and Mike, decided to replace the framed pictures with her replica drawings one by one, before revealing it took them 11 days to notice.

‘I happened to have a box of crayons and it all sort of clicked from there,’ she said, speaking to Bored Panda.

‘That was several months ago, however. It wasn’t until COVID-19 that I found myself with more time on my hands and I actually could start it.’ 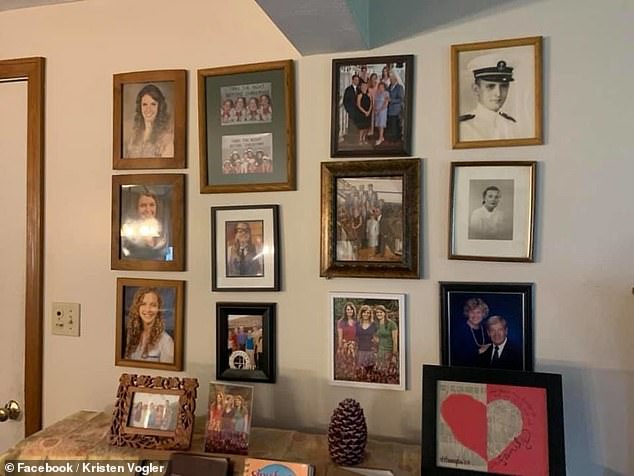 Kristen Vogler, from Massachusetts, is in quarantine with her parents, and decided to prank them by replacing their framed pictures with drawings one by one. Pictured: the original pictures framed on the wall 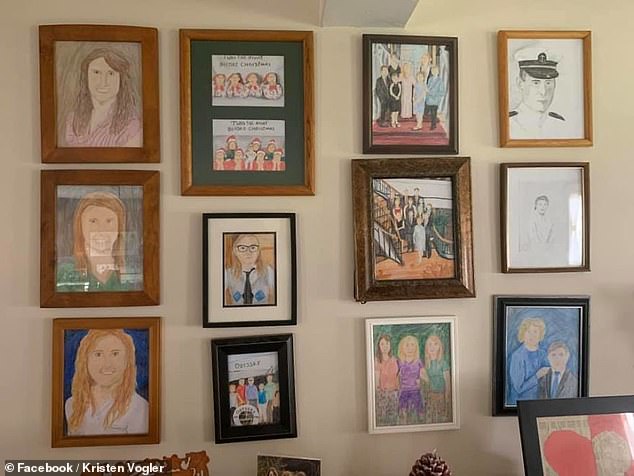 Pictured: The original pictured recreated with drawings from Kirsten, after an 11-day-long prank

Sharing her prank on Facebook, she wrote: ‘I started poorly recreating the framed photos on our wall with top-notch art supplies, aka—a box of crayons.

‘Every day I replaced a new photo with a new, and terrible, crayon drawing.

‘Sneaking these masterpieces up was not easy, I had to hide in the bathroom clutching the frames multiple times.

She added: ‘It took Paula Sassone Vogler and Mike Vogler 11 days to notice that anything had changed. I find that concerning.’

Kristen’s amused parents couldn’t stop laughing once they noticed there was something different with their photo gallery. 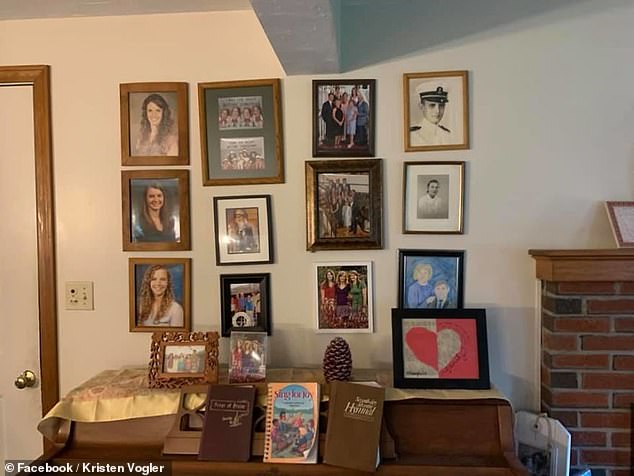 Kristen started by replacing a portrait of her parents, which featured in the bottom right corner of the wall display. Pictured: the wall on the first day of the prank 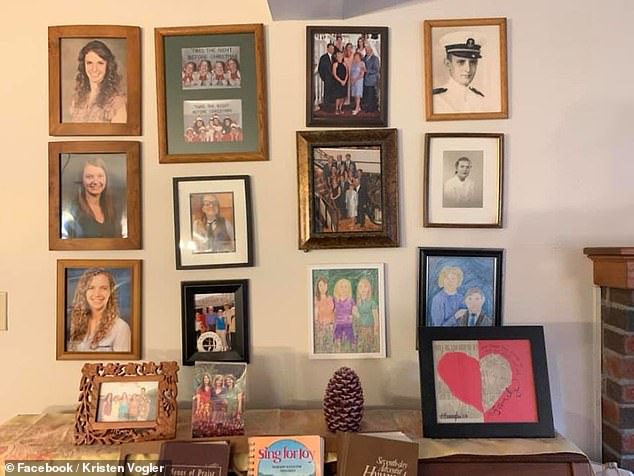 On the second day, the prankster replaced a picture of her and her two sisters right next to the portrait she had replaced the day before (pictured second bottom right) 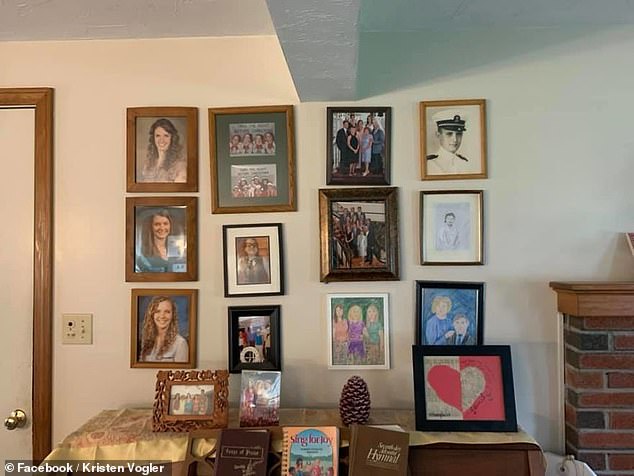 On the third day, she used a pencil to recreate an old-timely black and white picture (middle row, right)

Before realising it took her almost two weeks to notice, Kristen’s mother joked: ‘Please tell me you just did that.’

Kristen says her drawings were ‘mediocre’ and was amazed it took her parents so long to notice her mischievous antics.

The prankster explained she would hide the frame from her parents in order to switch the pictures and had to come up with plans to get her parents out of the house – especially on rainy days.

She also added she was almost caught out with one of the pranks on one of the last days, and had to be more vigilant.

In the Facebook post, she continued: ‘I had a lot of fun messing with my parents during the downtime between Kristen Vogler Design projects. I hope you enjoy it, and if you know someone needing a mediocre crayon drawing, you know where to find me.

‘*these crayon works are not supposed to be good by any means, that was part of the fun, so feel free to make fun of them.’ 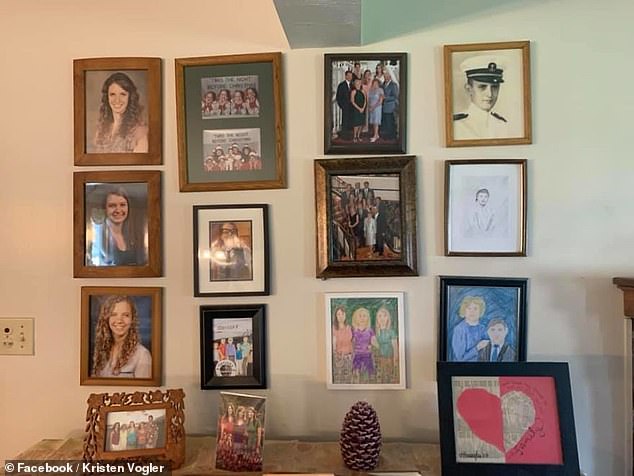 After four days, and with her parents still none the wiser, she replaced another photo of her with her sisters which appeared at the bottom of the wall (second left, bottom row) 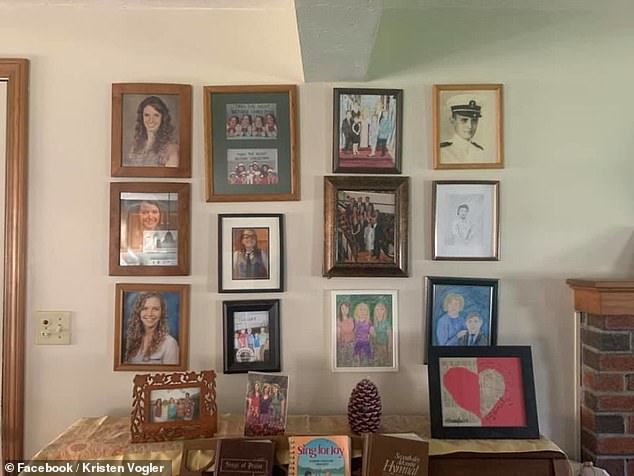 On day five, Kristen replaced one of the family pictures at the top of the wall (first row, second right) 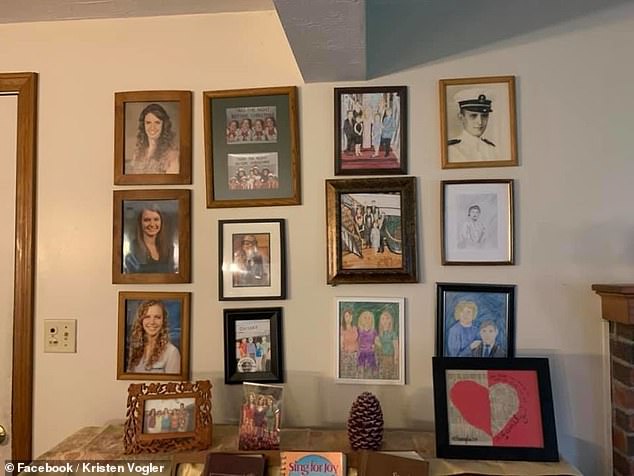 Expending her prank to even more pictures, Kristen replaced another family picture, on the middle row, next to the black and white picture 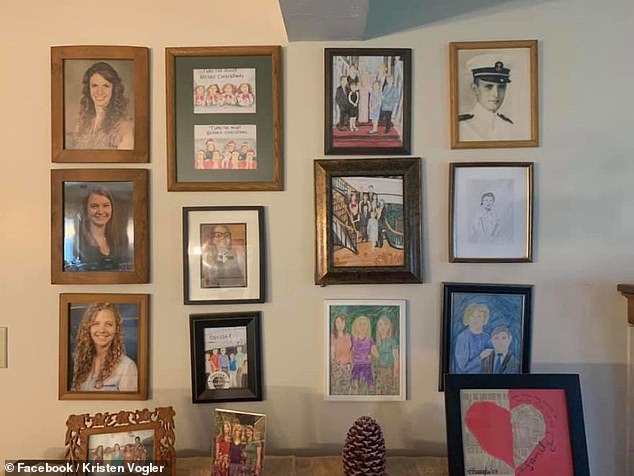 When her parents still did not notice, the prankster switched a family card (top row, second left) with a drawing 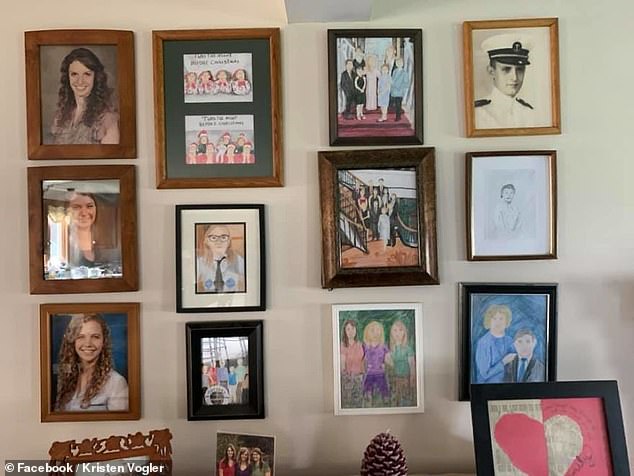 After eight days, with the joke still going on, she replaced a childhood portrait in the middle of the wall (middle row, second left) 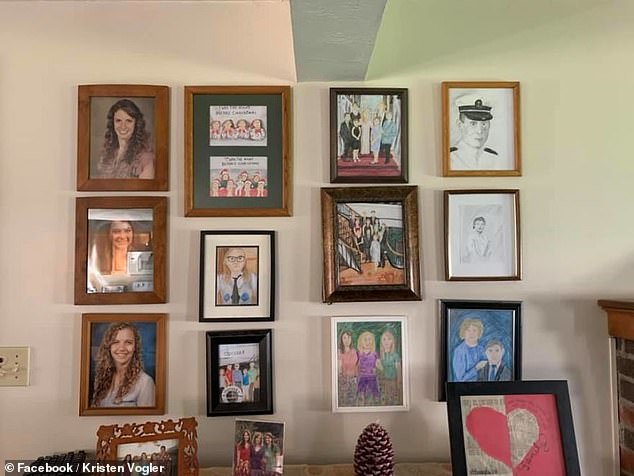 After nine days of pranks, Kristen switched the old navy portrait on the top right corner of the wall with a painting (pictured) 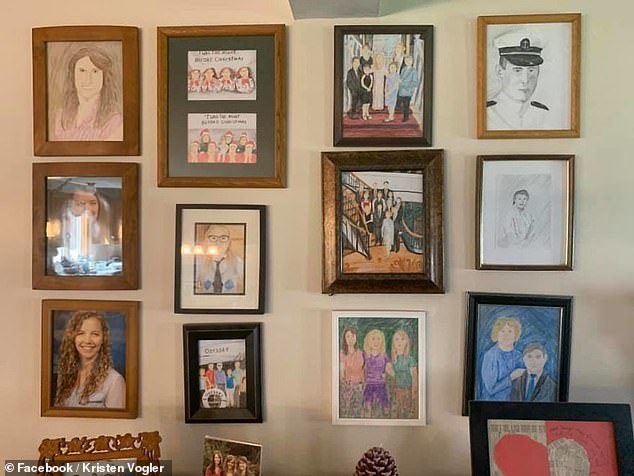 With her task nearing the end, Kristen changed one of the solo portrait of her elder sister at the top of the wall (pictured top left) 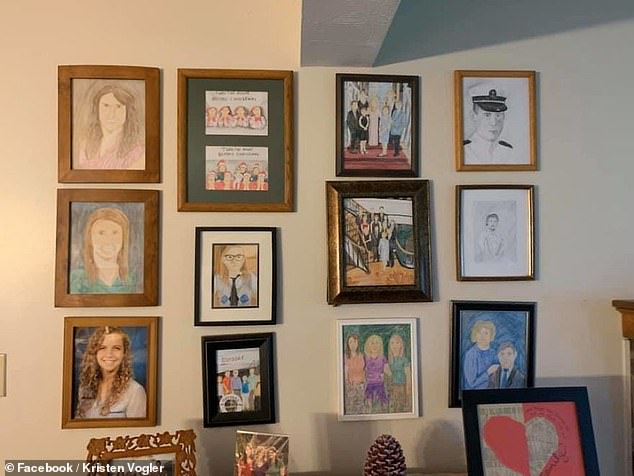 On the penultimate day of her prank, Kristen said she almost got caught hanging the replacement drawing (middle row, left)