Any reality show isn’t complete without a resident "villain" who adds a little bit of drama to the mix. For Netflix’s Selling Sunset, that’s definitely the case. After the Season 3 premiere on Aug. 7, Oppenheim Group member Davina Potratz pretty much became the established button-pusher of the group, even surpassing reigning drama queen Christine Quinn in fans’ eyes. However, Davina’s reaction to being called a villain on Selling Sunset shows she’s not letting the show define her.

Although Davina had a few spats here and there in Seasons 1 and 2 of Selling Sunset, most fans only started seeing her as a true "big bad" character in Season 3, when she questioned the reasons behind her co-star Chrishell Stause’s divorce from This Is Us star Justin Hartley. She ruffled a lot of feathers along the way, and earned a good bit of public backlash because of it.

When asked about whether Season 3 gave her a "villain edit" in an Aug. 23 interview with Variety, Davina didn’t seem fazed. "I think that there are just thousands of hours of footage and they have to narrow it down," she explained. "I don’t think Adam [DiVello, the series creator] is intentionally trying to give me such an edit. I think that he just made the show as entertaining and dramatic as possible … You don’t see the whole conversation, you don’t see how the other person reacted."

Overall, Davina seems to feel pretty damn confident about who she is — even if not all sides of her are shown in the episodes. "I’m a very warm and sweet person and the whole cast knows that, production knows that," she said. "Of course everyone has bad moments, including myself. If you don’t show me smiling or being warm and fuzzy, then it looks like all I am is the 10% where I had a bad moment… The show doesn’t define me, it doesn’t define anyone."

As chill as she came off in the interview, Davina did make it clear she’s not 100% thrilled with what people think of her based on the show. "It’s not fair. I wish you saw more of my whole personality," she said. 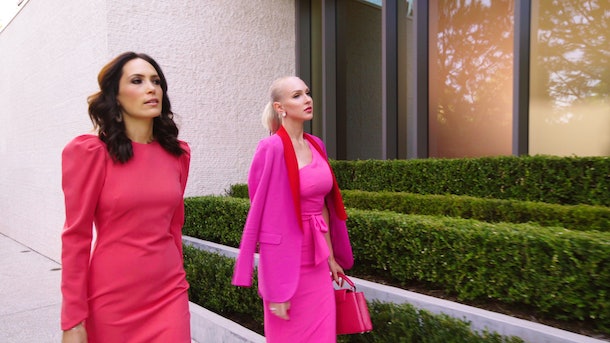 Davina also addressed the social media hate she’s been getting recently, but she knows how to handle it after three seasons of being a Netflix reality star. "I really don’t take it personal," she explained. "In the beginning, it was a little more difficult, but now it’s much easier to not take it personal. I just block and delete. If you focus on negativity, you’re going to be upset."

Clearly, this power-agent knows how to take things in stride. Which is probably a good thing, since all her energy can instead go into selling homes, like that $75 million one from the show — which, BTW, seems to perhaps have a buyer on the horizon.