Home » Lifestyle » ‘Delays will increase the chance of lockdowns’: McKell Institute warns of $1.4b hit to economy

‘Delays will increase the chance of lockdowns’: McKell Institute warns of $1.4b hit to economy

Failing to speed up Australia’s vaccination rollout will increase the risk of new COVID-19 outbreaks and snap lockdowns that researchers warn could cost the economy more than $1 billion.

Even before Prime Minister Scott Morrison unveiled changes to Australia’s rollout due to reports of rare blood clots potentially linked to the AstraZeneca vaccine, the McKell Institute found the rate of vaccination would need to be lifted by up to 15 times to meet the targets set out in the federal government’s initial road map. A jump of this magnitude would have made it the second-fastest rollout program in the world in per capita terms. 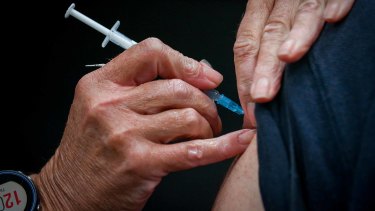 Delays in getting the nation vaccinated could prove costly.Credit:Eddie Jim

If the rollout sped up enough to match the pace of comparable countries, there could be a 40 to 353-day delay in getting 65 per cent of the population vaccinated, which is the proportion the World Health Organisation estimates is required to reach herd immunity. To date, only 1.16 million doses have been administered. The government’s initial road map was to have every Australian given a first dose by October.

Due to an increased risk of outbreaks if the road map isn’t able to be achieved, the researchers found capital city lockdowns of between 3.8 and 33.9 days would come at a likely economic cost of at least $470 million.

They compared vaccination rates in Israel, the United States, United Kingdom, France, Canada and Germany to determine the possible speed of Australia’s rollout and took into account the lower risk of outbreaks due to early vaccination of frontline workers.

The report was undertaken before Prime Minister Scott Morrison announced changes to Australia’s rollout due to the risk of rare blood clots linked to the AstraZeneca vaccine.

But McKell Institute executive director Michael Buckland said he still expected Australia’s vaccination rate to be closer to that seen in the UK “when giving the government the benefit of the doubt”, which could result in 11 more days in lockdown at an economic cost of $1.37 billion.

To avoid this and complete the vaccine rollout by November, between 1.47 million and 1.77 million doses would need to be administered weekly, up from the current rate of 127,000 a week. “That really tells me we’re not going to catch up,” Mr Buckland said.

In a slower rollout scenario, in line with Germany’s, the road map would be pushed back by 353 days and the economic cost could total $4.16 billion. At the US rate, there would be a 40-day delay, costing $472 million due to an expected extra 3.8 days of lockdown.

Federal Treasurer Josh Frydenberg last year said coronavirus-related restrictions on a national basis cost the Australian economy $4 billion a week. The McKell report averages official data for the cost of localised closures and assumes state and territory leaders will react to outbreaks with short snap shutdowns, similar to that seen in Brisbane before Easter.

“It’s vital we are clear-sighted about the cost and impact of a government’s action or inaction. These delays will increase the chance of lockdowns and the economic costs that come with them,” Mr Buckland said.

Stay across the news you need to know related to the pandemic. Sent Monday and Thursday. Sign up here.