English teacher reveals the VERY different slang words used in Britain, America and Australia – including ‘doona’ for duvet and ‘bottle-o’ for off-licence

An English teacher has shared a useful guide revealing the difference between British, American and Australian slang.

YouTuber Lucy Earl, 25, from Hertfordshire, vlogs under the name ‘English With Lucy’, which has amassed 4 million subscribers since January 2016.

With the help of Australian blogger Emma and American YouTuber Vanessa, Lucy has released a guide, which shows how the same words can have very different meanings across UK, US and Australia.

Some of the words proved more confusing than others, such as the British word for ‘crisps’ which is the same as the American word ‘chips’ while Australians use the word ‘chips’ to describe both potato chips and hot chips.

Different words and vocabulary in the UK, US and Australia

Others include words which are different in each language, for example the British word ‘duvet’ is ‘dooner’ in Australia, and ‘comforter’ in American English.

Lucy explains that pronunciation and vocabulary are different in English, because it is not always a phonetic language, encouraging her viewers to read books in their native language while listening to them in English.

‘We may all speak the same language’, says Lucy, ‘but we speak with different accents and different vocabulary, so this video is perfect for improving your vocabulary.

‘English Isn’t a strictly phonetic language the way a word is written in English may not give you an indication at all as to how it’s pronounced in english.’ 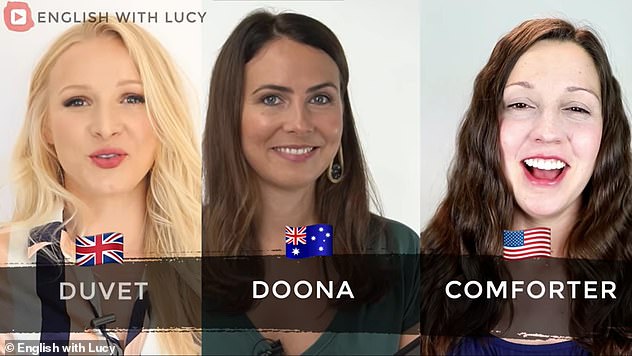 YouTuber Lucy Earl (left), 25, from Hertfordshire, who vlogs under the name English With Lucy shared a useful guide revealing the difference between British, American and Australian slang and vocabulary with the help of vloggers Emma (middle) and Vanessa (right). The British word ‘duvet’ is ‘dooner’ in Australia and ‘comforter’ in American English

Meanwhile the Brits say ‘toilet’ or ‘bathroom’, while in America the correct term is ‘restroom’.

And, confusingly, the British word flip-flop means ‘thong’ in Australia, while a thong is underwear in America.

Elsewhere the British word ‘off-licence’ is Bottle shop or bottle-o in Australia, and ABC store in America.

And while we may wear ‘wellies’ to festivals in Britain, in Australia the term is ‘gumboots’  and in America the term ‘rain boots’ is used.