Disadvantaged schools risk falling further behind under the coronavirus shutdown because of the state government's "middle-class perspective", a Melbourne principal says.

Epping principal Loretta Piazza said she had been inundated with requests from families to send their children to school despite government directives to keep students home where possible. 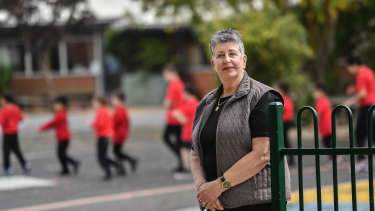 Dr Piazza, principal of Meadowglen Primary School, said 60 of her 540 students had attended school on Wednesday, compared with an average of 10 in middle-class suburbs.

Dr Piazza and her team had already spent weeks trying to provide laptops and internet access to many families in need, she said.

“What’s happened here – and no offence to the government or the Education Department, because I have great respect for the people there – but they’re coming from a very middle-class perspective,” she said.

“Given we’ve got 1600 schools in Victoria, there are many, many disadvantaged schools like ours. We’re really just chasing our tails.

“We’ve got all these issues that your normal middle-class schools like in Balwyn or even Preston [don't have]. They’ve got 10 kids turning up – we’ve got 50 to 60.”

Julie Podbury, president of the Australian Principals Federation, said the shutdown would be "much more difficult for the children from disadvantaged schools".

"It would really come down to the parents' ability to guide them through the process," she said.

Thousands of Victorian families have begun to navigate the challenge of home learning, with classes officially back on Wednesday.

Some children logged on from home, while others arrived at near-empty schools.

Under state government guidelines, vulnerable children or students whose parents are essential workers are allowed to attend school, but most pupils are being encouraged to study from home.

Schools across the state reported a few teething problems on the first day of term two. Dale Pearce, principal of Bendigo Senior Secondary College, said he expected things to get tougher. 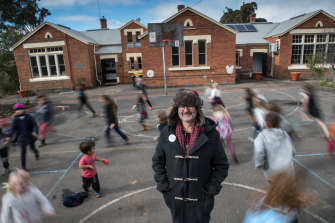 "As a parent … I think we can now see how difficult this is going to be," he said. "And we're educated, reasonably well-to-do parents. Others will struggle a lot more."

Nigel Rodrigues, principal of St Kevin’s Primary School in Ormond, said students were raring to go after holidays in isolation.

“These kids have been starved of their friends over the last few weeks, so you can see that social side which is really important,” Mr Rodrigues said.

He said no students had attended the small Catholic primary school on Wednesday, and students and teachers would use Google Meet to speak at 9am and 2pm.

Chris Burgess, principal of Taradale Primary School, said the internet had been slow but there had been “no disasters”.

The small school, about 100 kilometres north-west of Melbourne, has sent out hard copies of work and set open-ended tasks that do not need to be completed at set times to work around patchy internet connections.

“They might be nature-based things – like find five different leaves or flowers and write a description,” Mr Burgess said.

“We’re also doing things to lessen the feeling of isolation, like submitting photos of what the kids have been doing and sharing it on social media.”

Taradale was also setting activities that students could do independently, so parents working at home could continue to work, Mr Burgess said.