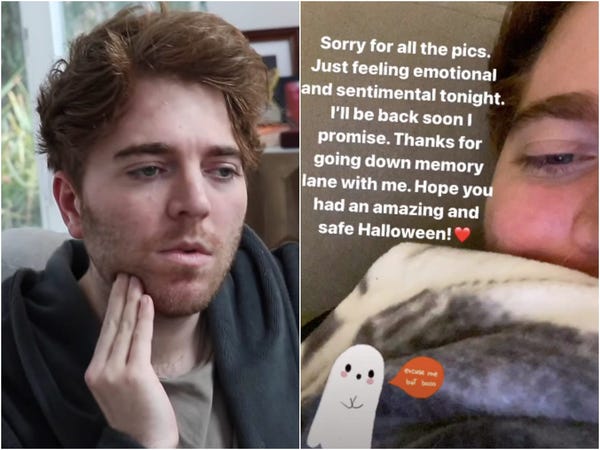 Shane Dawson, the YouTuber who fled the platform in July after his old, offensive content resurfaced, hinted at a return to his channel over the weekend. He posted several pictures on his Instagram story on Sunday, celebrating the one year anniversary of his Conspiracy makeup line he made in collaboration with beauty YouTuber Jeffree Star.

Dawson posted several photos of him and Star at the palette's launch, calling it "one of the best moments" of his life. He also thanked Star for "believing in him."

"Sorry for all the pics. Just being emotional and sentimental tonight," Dawson said in the final Instagram slide. "I'll be back soon, I promise."

Many people thought it was strange to celebrate the makeup line and ignore the past six months since Dawson's 2020 has been defined by his history of using racial slurs, dressing in blackface, and making sexual jokes about minors and animals.

"Does Shane Dawson really think he's gonna be able to make a comeback?" said Twitter user Tanesha. "Why is this man like nothing happened? I thought we agreed he needed to retire from public life and live in obscurity…"

"Having your come up be off the backs of marginalised groups and stereotypes of those groups, it's gross and Shane Dawson shouldn't return to YouTube," tweeted beauty influencer Adrian.

"I'm thinking it's a symbol of him working on his return to the internet," tweeted YouTuber kodeerants. "Maybe a series on himself to clear his name? I'd rather watch grass grow to be honest."

Star, meanwhile, is embroiled in his own troubles after being accused by several people of physical and sexual abuse — claims he has not yet addressed. He and Dawson also found themselves to be suddenly unpopular over the summer when fellow beauty influencer Tati Westbrook accused them of manipulation and gaslighting.

While Star has done a good job of ignoring every accusation against him, Dawson posted an apology video in July called "Taking Accountability," and has been largely out of sight since. However, his presence has popped up online a few times.

He made a quiet return to YouTube in a video posted by his fiancée Ryland Adams in September, but reactions were very mixed.

Dawson then posted his first Instagram story since the summer at the beginning of October, to celebrate Adams' birthday. He has also dropped new merchandise twice during his YouTube break.

While it's clear Dawson does not have universal support for a return, some would be happy to see him back. He updated his Instagram story on Sunday night saying the "sweet messages" he received "made my whole year."