An alleged puppy scammer who used stolen images to sell pure bred puppies that never existed has been arrested at a home in Sydney's west.

The 27-year-old Oxley Park man was charged with 16 fraud offences on Wednesday after he was targeted for the alleged online puppy scam, targeting at least eight victims in NSW, Queensland, Western Australia and the ACT. 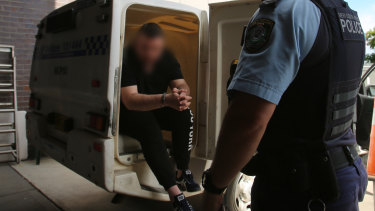 The 27-year-old man was arrested at his Oxley Park home.Credit:NSW Police

Police allege the man used Gumtree and a rescue dog website to advertise pure bred blue Staffordshire bull terriers for around $2700. Legitimate breeders usually sell the dogs for around $3000.

Photos used to advertise the seven-week-old puppies were allegedly copied off other websites and posted as "bait" to would-be buyers.

On Wednesday morning the man was taken to St Marys police station and charged with fraud offences including dishonesty and doctoring paperwork. 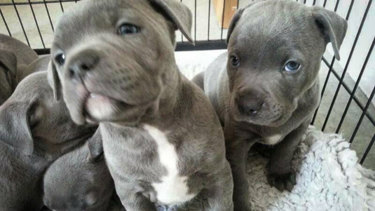 Photos of puppies allegedly used as part of the scam. Credit:NSW Police

He was refused bail to appear at Penrith Local Court on Thursday.

Investigations into the alleged puppy scam began in early July, following multiple fraud reports from victims around Australia. Employees working from home have flooded social media with photos of cats and dogs, following an uptake in pet adoption during COVID-19 lockdowns.

The ACCC has received more than 1000 reports of puppy scams in the first six months of 2020, with reported losses of almost $1 million.

While eight victims have been formally identified, Detective Inspector Pietruszka said analysis of seized devices and documents could reveal another 60 victims.

As the alleged mastermind of the scam, police say the man posted images of the puppies online.

When a consumer inquired about a dog the man allegedly requested a deposit via bank transfer of between $1000 and $2000, before telling the buyer the dog was on its way. Interstate buyers were also hit with extra transport fees.

"As the time approached [for] delivery of the dogs … he would ask for the remaining balance, which was often balked at by the victims wanting to receive the dog first," Detective Inspector Pietruszka said.

"Once he realised further money was not forthcoming he would then cut off all contact and victims could not get in touch."

One victim, Vinnie Ward, said it was "heartbreaking" when he and his family realised they would not be receiving the puppy for which they had paid.

“We fell in love with this incredibly cute puppy after finding him online and couldn’t wait to add him to our family. When we discovered this puppy was never real or for sale, it was very heartbreaking,” Mr Ward said.

Detective Inspector Pietruszka said investigators so far believed the man has operated alone and he was not "living large," rather looking to exploit consumers seeking companionship during the pandemic.

Detectives are undertaking analysis of the man's bank accounts, which he held in various versions of his name.

Detective Inspector Pietruszka said people seeking companionship in the form of a pet should scrutinise any online offers and watch for unscrupulous actors looking to take advantage.

"If a deal seems to good to be true, it often is. Go and meet [a seller] where possible," he said.

"Don't hand over money until you are 100 per cent sure the person exists, the animal exists and it's a legitimate transaction."