About 11.5 million workers will get up to $2745 more this financial year with extra cash to start hitting bank accounts within weeks after the federal government brought forward tax cuts to encourage earners to spend.

The widely-expected tax cuts revealed in the 2020 budget bring forward the second stage of a seven-year plan to simplify and reduce income tax. The cuts were set to begin in mid-2022 but will now see $12.5 billion more money in workers' hands over the next 12 months. 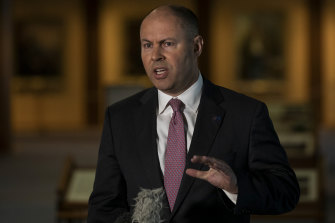 "As they spend their tax cuts this will help local businesses to keep their doors open and hire more staff," Mr Frydenberg said.

The low and middle income tax offset, known as the lamington, will be kept for this financial year giving lower income earners up to $1080 extra in tax relief. Under the original tax schedule the lamington was going to be axed when stage two began. The low income tax offset is increased from $445 to $700.

Earners will see more in their pay packet in coming weeks as the change reduces the amount of tax employers withhold through pay-as-you-go systems.

While there had been speculation government might bring forward the third stage, this might have proven politically difficult and attracted criticism from Labor.

Stage three remains legislated for 2024-25 and has not been brought forward.

Economists have been supportive of bringing forward the tax cuts provided they came alongside other significant stimulus measures, amid concerns some of the funds returned to workers would be saved rather than spent during the uncertainty of the pandemic.

However, budget documents see savings of the funds and spending as beneficial for the economy through the recession.

"This will support the economy through the recovery phrase by boosting consumption and, to the extent that households save more or pay down debt, improving households' balance sheets and their ability to consume in future," the budget papers say.