Authors Andy Griffiths and Gabbie Stroud know a thing or two about keeping children entertained. Griffiths' Treehouse series has sold over 10 million copies around the world and Stroud is a former teacher who writes parenting books and young adult fiction.

For many parents the prospect of having kids at home for months is looming large, but Griffiths and Stroud have activity suggestions to keep children happy and engaged – from the old school to the digital. 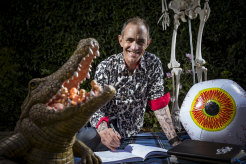 Griffiths' first suggestion is to create a family book, an idea that came from his collaborator and illustrator Terry Denton.

A collection of memorabilia as well as a journal, it can include everything from something funny someone said, to tickets to an event, or even the wrapper of an Easter egg. "It becomes an informal diary for the family, like an old-fashioned photo album," Griffiths says. "You don't have to write a lot; draw cartoons, make a list of annoying things about you – or your family, there's a lot of joy in that. It can be positive: [write] three good things that happened today."

Stroud suggests kids drag out all the toys they've never played with, or haven't played with in a long time, and for parents to encourage rediscovery.

Take inspiration from Babyface, the scary, one-eyed doll with spider legs in Toy Story 3, says Griffiths. "I always look at the things around me and rearrange them in creative, funny ways, even toys – take the head of one toy and put it another toy, that's endless amusement." 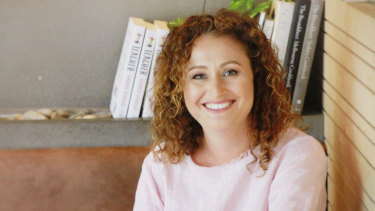 Gabbie Stroud, an author and former teacher, has some useful suggestions for keeping kids busy.Credit:Angi High

Old-school ideas are as appealing today as ever, says Stroud. Make mud pies, cubbies or camp in the back yard, make play dough. She suggests tasks "in the shed": creating objects with wood glue and scraps of timber, hammering pretend nails, measuring things or 'painting' the house with water. Older kids might cook for the whole family.

Collecting things can be great fun, Griffiths says, even in the backyard or inside. "It could be blue things or leaves or little pebbles… put them in jars. I've always loved making collections; I've got a jar of old chewing gum wrappers from when I ate a lot of gum."

Writing letters or cards, painting or drawing pictures for family members that kids can't see is a fun, productive activity, particularly now. Stroud also suggests children make digital content, such as video of themselves cooking or doing trampoline tricks, that can then be shared with grandparents.

Both authors agree balance in the day is important. Reading and writing might be balanced with an hour or two of physical exercise each day, the same goes for screens. Griffiths says exercise apps are a great resource.

While Stroud is bunkering down with her primary school-aged girls, she is mindful of the reality for many who are juggling work or single parenting. "It's absolutely OK in these unprecedented times to pop them in front of the television. We can only control what we can control."

Griffiths is at home writing and has managed to remain productive. "Creativity is actually a refuge," he says. "It's a wonderful place to go, almost like reality … it's a place to hide."