Every team of LeBron James' NBA career, ranked — including his current Lakers squad

Over his 17-year career, LeBron James has played on everything from super-teams to lottery dwellers.

But which of those teams were the best?

There's no exact formula for answering such a question, but to rank the best teams of James' career, we used several factors: team record, net rating (the amount by which a team outscores opponents per 100 possessions), their playoff record and net rating, and ultimate result (e.g. championship, Finals appearance, etc.).

We also looked at James' usage rate (to see how much work he was doing), his win shares (calculated by Basketball-Reference), and the number of players who made All-Star teams in that season. Lastly, we used a bit of logic and subjectivity.

Below is our ranking of James' best teams: 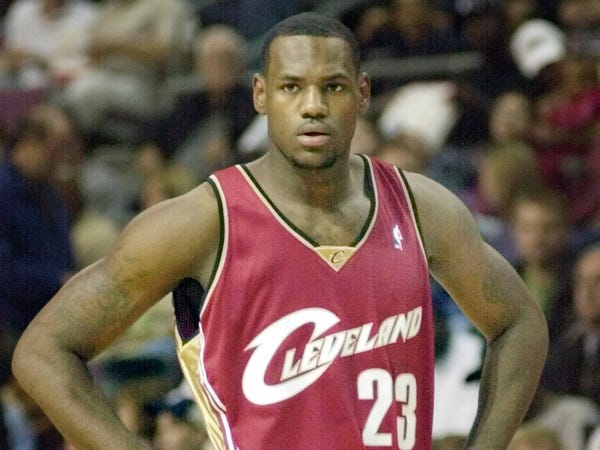 Explanation: The first team of LeBron's career was his worst. The 2003-04 Cavs were coming off a 17-65 season and landed the No. 1 pick to select LeBron. He immediately came in and led the team in scoring, usage, and win shares. His teams didn't finish below-.500 again for the next 14 years. 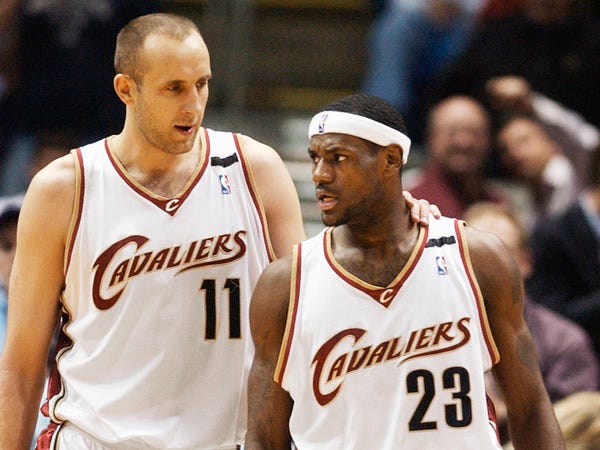 Explanation: The next year, the Cavs improved by seven games to finish over .500, but they still missed the playoffs. James improved by leaps and bounds, averaging 27-7-7 as a 20-year-old. He even had a fellow All-Star in Ilgauskas, who averaged 16 points and 9 rebounds per game. James would make the playoffs every year for the next 13 seasons. 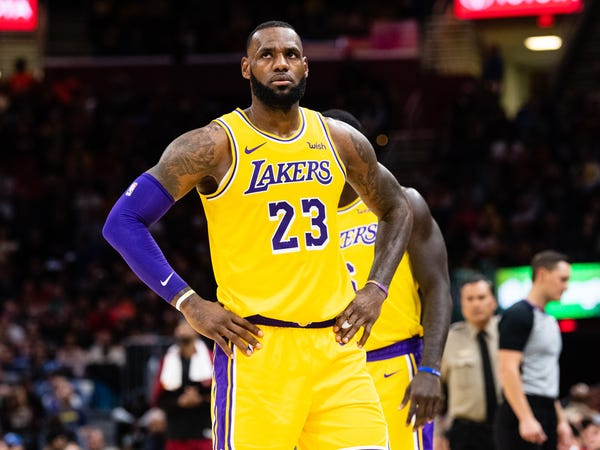 Explanation: Analyzing the 2018-19 Lakers is like looking at three different teams. They were 20-14, in fourth place, after Christmas. Then they went 7-11 while James sat out with a groin injury. After he returned, the team was undone by trade rumors, infighting, and injuries. With James, they were 28-27 — above .500, but not a playoff team. Could they have made the playoffs without everything that went wrong? Probably. But because those things happened, it's hard not to view the '18-19 Lakers as one of the worst teams of James' career. 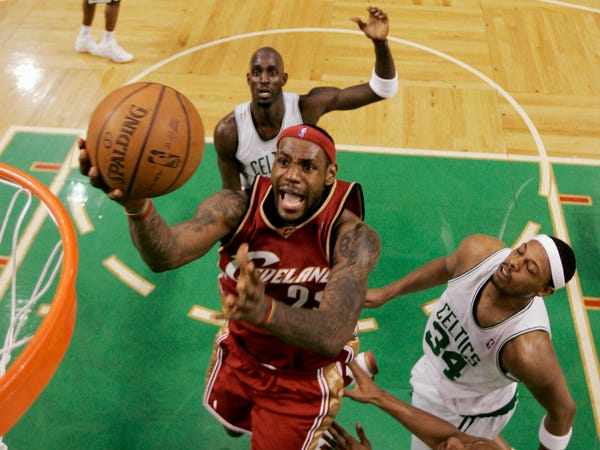 Explanation: The 2007-08 Cavs came back down to Earth after a Finals run the year before. Their offense improved mildly from some additions to the team, but their defense regressed from fourth in the league to 11th. They ultimately lost in seven games to the star-studded Celtics. 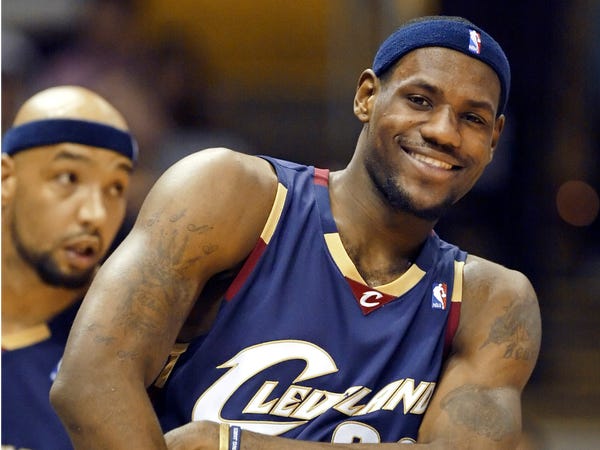 Explanation: James took another leap in his third year, averaging 31 points per game while the Cavs improved offensively, finishing 10th in offensive rating. They made it to the second round of the playoffs before losing to the reigning Eastern Conference champions, the Detroit Pistons. 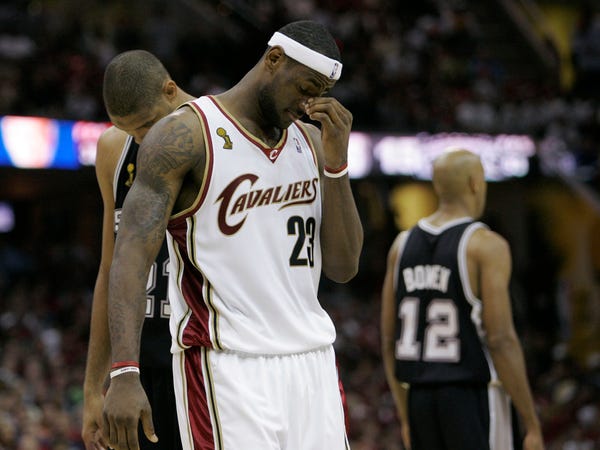 Playoffs: Lost in 4 games in the Finals

Explanation: The Cavs' unexpected Finals run in 2007 is part of the lore of James. The most memorable moment came in the Eastern Conference Finals when 22-year-old James scored the last 25 Cavs points in the fourth quarter and overtime to beat the Pistons.

However, they were swept in the Finals by Tim Duncan and the Spurs, proving they didn't have nearly enough talent to compete for a championship. Duncan later told James the league would one day be his. He was right. 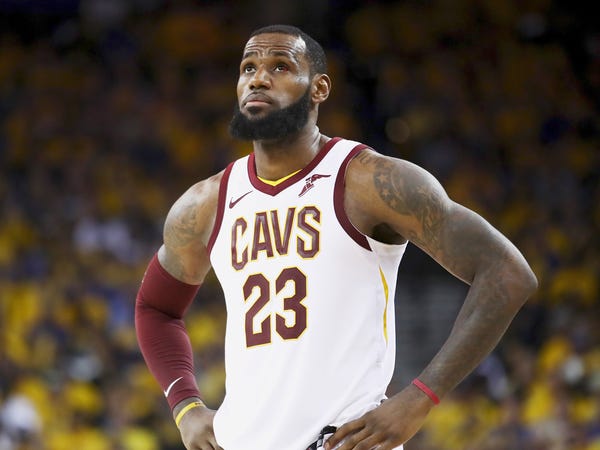 Playoffs: Lost in 4 games in the Finals

Explanation: James' final Cavs team was not an exceptionally good team by most measures. They were elite offensively, but just as bad defensively. They never really flipped the switch in the playoffs, posting a negative net rating, and needing seven games to beat both the Indiana Pacers and Celtics.

Nonetheless, James had another All-Star in Love and a fairly deep rotation that might have been better with more time to jell. Though it took an historic effort by James, they still made the Finals where they would have had a shot against any non-Warriors team. 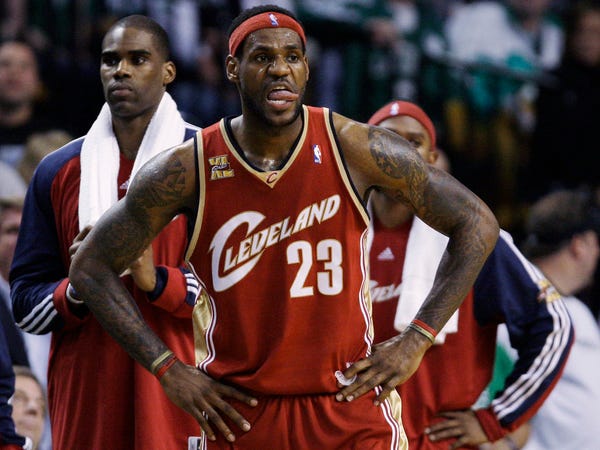 Explanation: The 2009-10 Cavs were dominant but a little something was missing. Perhaps it was James' free agency hovering above them the entire year. Mo Williams regressed from an All-Star season the year before, and the addition of Shaquille O'Neal did little for the team.

The season might be best remembered for the image of a checked-out LeBron taking off his jersey as he walked off the court after being eliminated by the Celtics in the playoffs. 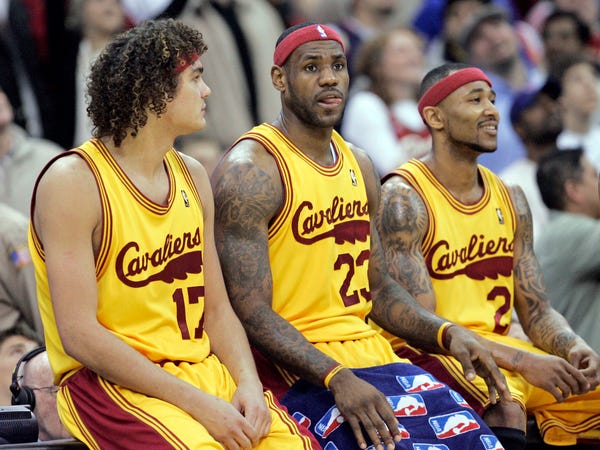 Explanation: The 2008-09 Cavs were the first true LeBron James-led juggernaut. They were efficient offensively, hitting the third-most threes that season at the second-best clip in the league, and an even better defensive unit. James got playmaking and scoring help in the form of Williams, and they had a deep team filled with the kind of proven veterans that James likes. In the playoffs, they simply ran into a better Orlando Magic team and fell short of expectations. 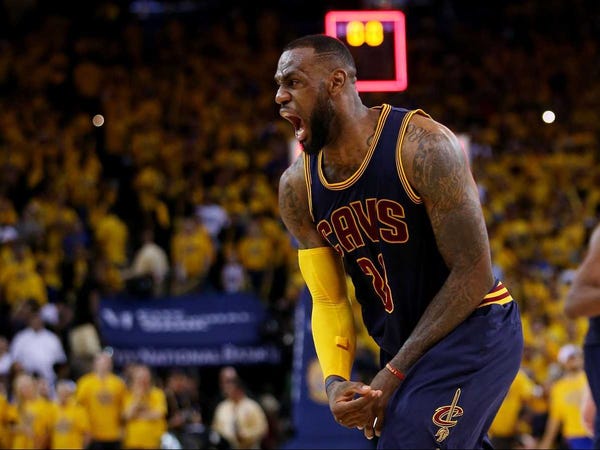 Playoffs: Lost in 6 games in the Finals

Explanation: James' first year back in Cleveland featured some growing pains. Kevin Love was an awkward fit, Kyrie Irving was adjusting to James' presence, and James physically struggled for the first time, eventually needing time off to heal his back.

They still turned it on in the playoffs and might have won a championship if Love and Irving did not both get hurt in the postseason, leaving James to carry a ragtag squad in the Finals. 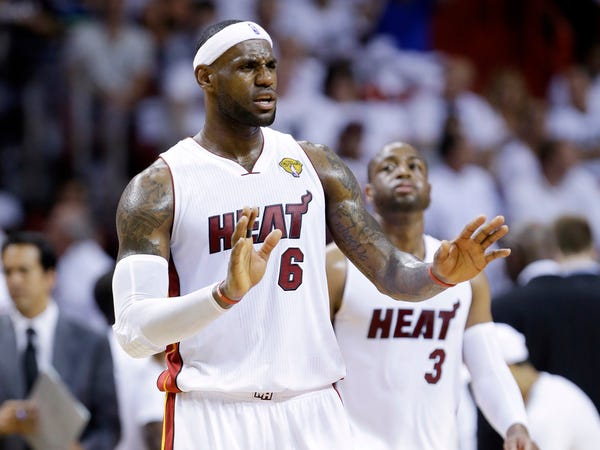 Playoffs: Lost in 5 games in the Finals

Explanation: LeBron's final season with the Heat was the least dominant of their four-year run. The team was clearly exhausted after three straight Finals runs. and they never quite turned it on in the playoffs, posting just a 1.8 net rating. When they got to the Finals, they were beaten convincingly by a Spurs team out for blood.

The 2013-14 Heat team did, however, see James, Wade, and Bosh at their most cohesive of the four years, and making a fourth straight Finals appearance isn't such a bad result. 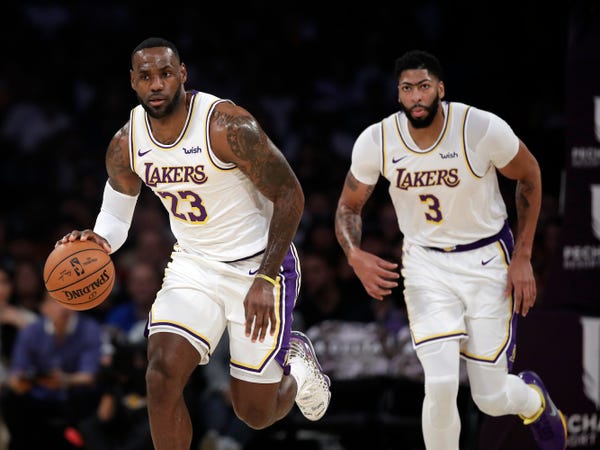 Explanation: We don't yet know the fate of the 2019-20 Lakers, but the beginning was promising. The Lakers exploded out of the gate, showing off a fearsome defense and a cohesive offense.. James officially became point guard — and led the NBA in assists, at age 35. Everything was looking great, until the league was shut down for the coronavirus pandemic.

Now as the Lakers prepare to resume, they are still considered favorites in the Western Conference, but no one is quite sure what the play will be like in the bubble. Nonetheless, it's hard to see anyone other than the Clippers in the West knocking off these Lakers, meaning James has a real shot at a fourth championship.

If the Lakers win the 2019-20 title, they'll climb these rankings. We just can't put them over teams that actually won championships just yet. 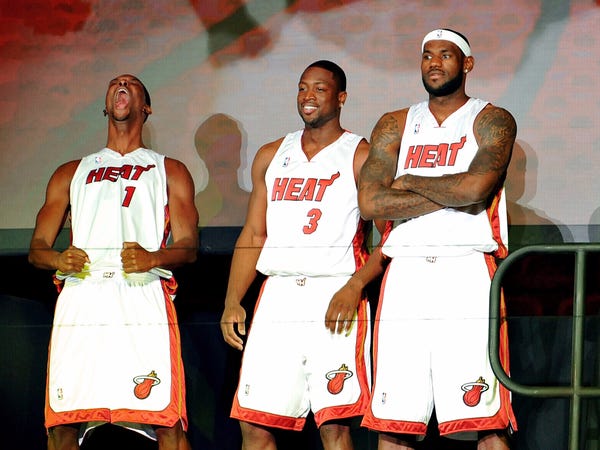 Playoffs: Lost in 6 games in the Finals

Explanation: Memory would suggest that the first year of the Heat Big 3 featured some growing pains, but that team still finished 3rd in offense and 5th in defense, with a whopping 8.5 net rating. The talent and hunger were just too much for most opponents. Still, things were a little awkward between James, Wade, and Bosh, and ultimately, it was James who let the team down in the Finals with an ugly, unnerved performance against the Mavericks. 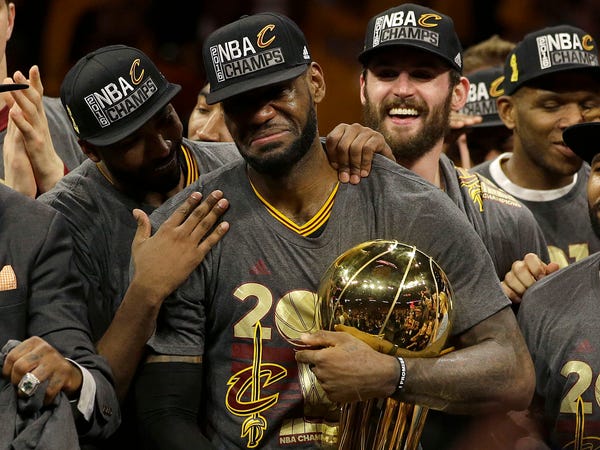 Explanation: The 2015-16 Cavs could stake a claim as the best team in LeBron's second stint in Cleveland. They had the best regular season and they breezed through the playoffs. They also won the first title in Cavs history in an epic comeback against the Warriors.

But there was still some awkwardness between James, Love, and Irving. Irving, in particular, had one of his more inefficient regular seasons in 2015-16, and neither he nor Love made the All-Star team. As good as the team was and as sweet as their title was, it's worth asking if they'd still be champions if Draymond Green had not been suspended for Game 5 of the Finals. 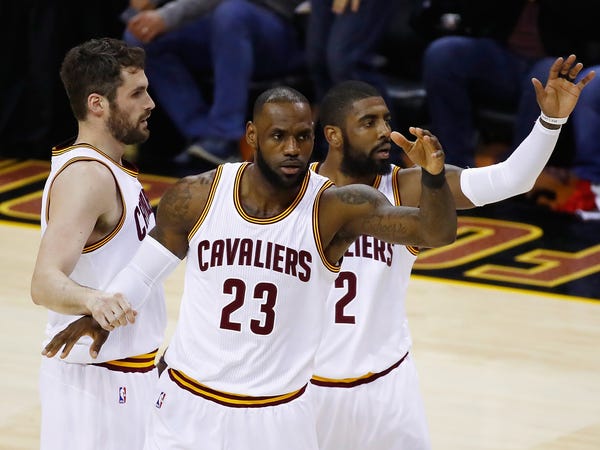 Playoffs: Lost in 5 in Finals

Explanation: It's bold to say a team that coasted in the regular season and didn't win it all was the best Cavs team. But the 2016-17 Cavs were perhaps the deepest of James' career. Irving posted one of the best seasons of his career, Love comfortably became the third option, and James became more efficient.

The key number is 9.7 — the Cavs' net rating in the playoffs, when they kicked it into high gear and ran over everyone in their path. They were arguably an all-time great team, with three stars functioning at once, surrounded by a bevy of shooters. They probably would have won the whole thing if they ran into any team that wasn't the Kevin Durant Warriors. 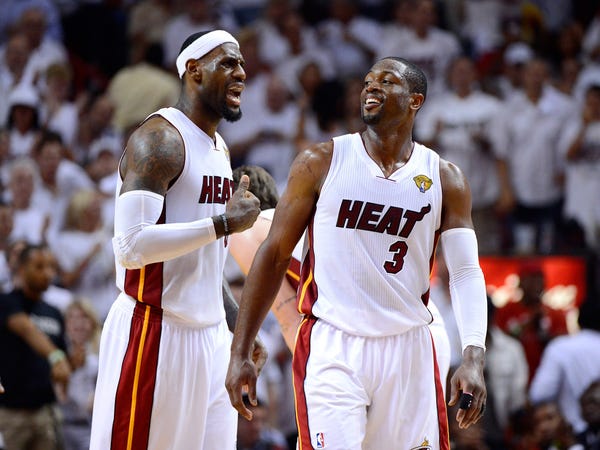 Explanation: The 2011-12 Heat saw a group motivated by a Finals collapse come roaring out in the lockout-shortened season. Their chemistry wasn't perfect, but it was better than the year before, and they began to use their physical superiority to their advantage more often. Ultimately, it was the team that got James his first ring, which was his reason for moving to Miami. 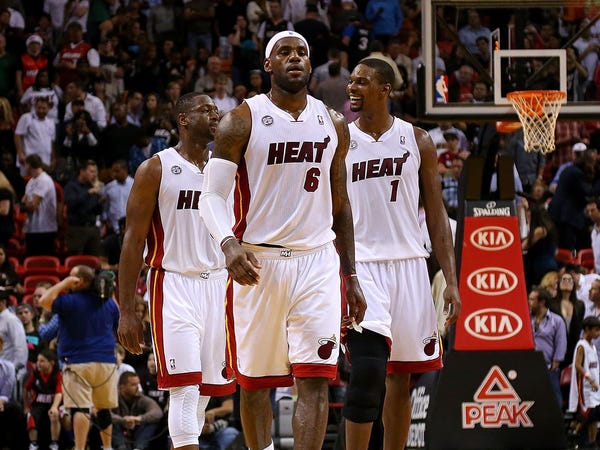 Explanation: Chris Bosh has told people that 2012-13 LeBron James was the most dominant player he had ever seen — that James could go out and put teams away so easily, it was fun to watch.

While James put together perhaps the finest all-around season of his career in 2012-13, his supporting cast helped, too. Wade and Bosh played more freely alongside him. The Heat's offense exploded this season, and they were an elite defensive unit when they wanted to be. They rattled off a 27-game win streak during the regular season, finally looking like the force many expected when they joined forces in 2010. Though it took a heroic and legendary Ray Allen shot in Game 6 of the Finals to keep them alive, they ultimately won a second straight championship.

Now, take a look at where all 22 teams resuming the season stand… 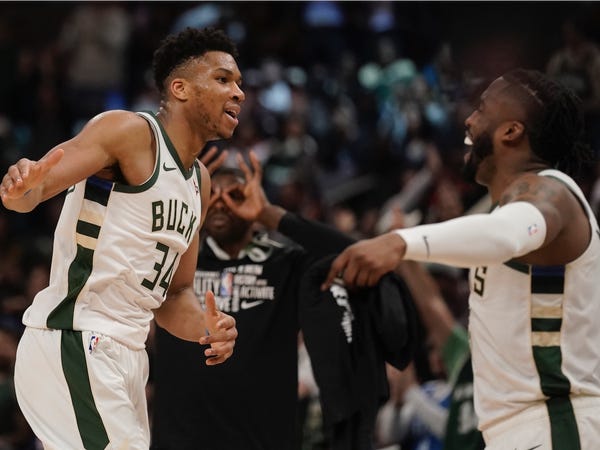 NBA POWER RANKINGS: Where the 22 teams heading into the Disney World bubble stand when the season resumes >