In last night’s episode, Sandi Toksvig was joined by her close friend and The Great British Bake Off judge Prue Leith to explore some of the best staycations in the Cotswolds – including the colourful and chic home designed by the A-lister.

A stone’s throw away from a private helipad, the five-bedroom, seven-bathroom Barnhouse – part of an exclusive lakeside resort near to Lechlade – boasts silk carpets, luxurious swimming pool and mezzanine master bedroom.

And those who tuned in were left more than impressed by the celebrity bolthole, which went on the market last year for £3.5 million and reportedly is rented out for between £10,000 and £25,000 per week, according to Gloucestershire Live.

‘This Kate Moss-decorated one has some lovely early 20th century elements and the pool is a big draw. And the cocktails, naturally,’ wrote one, while a second enthused: ‘This house designed by Kate Moss is stunning! The interior is so nice!’ 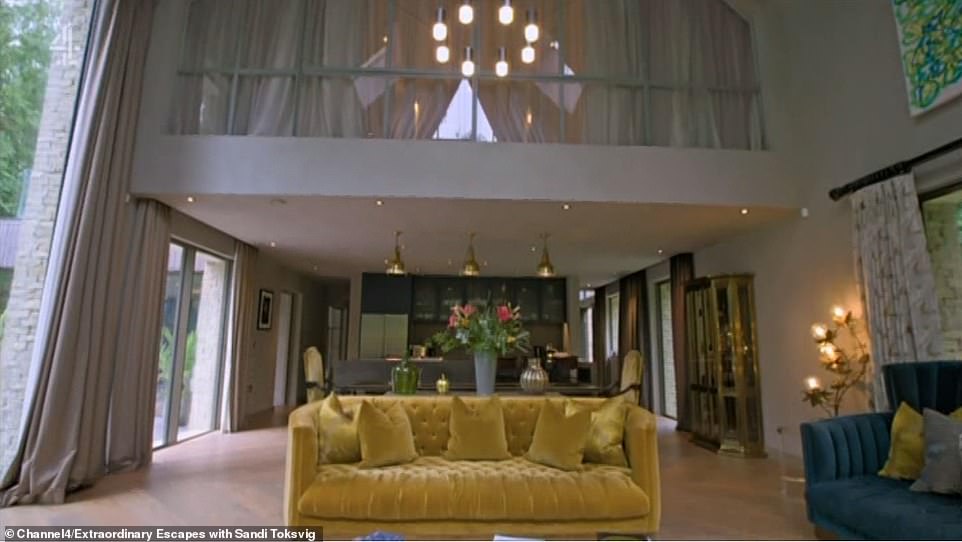 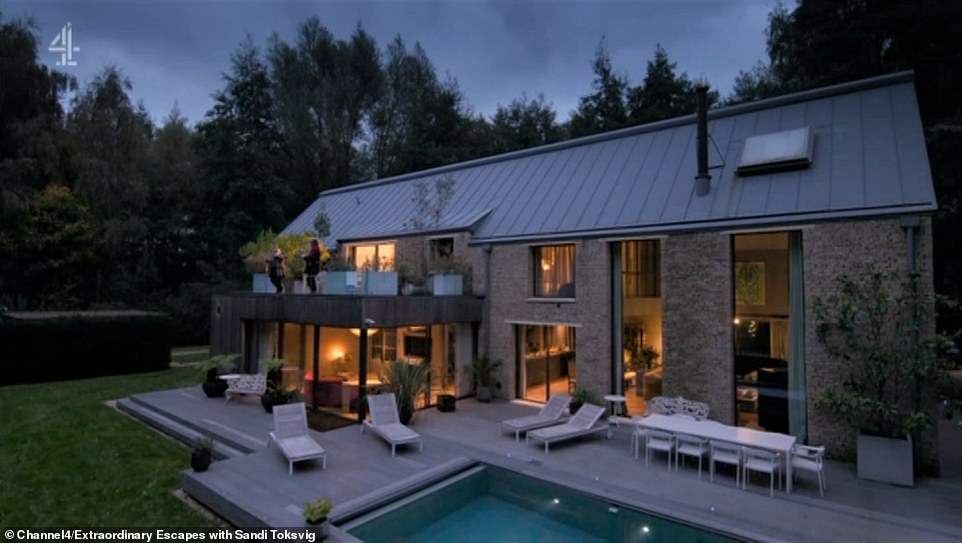 The five-bedroom, seven-bathroom Barnhouse is a stone’s throw away from a private helipad – and boasts its own luxurious swimming pool (pictured) 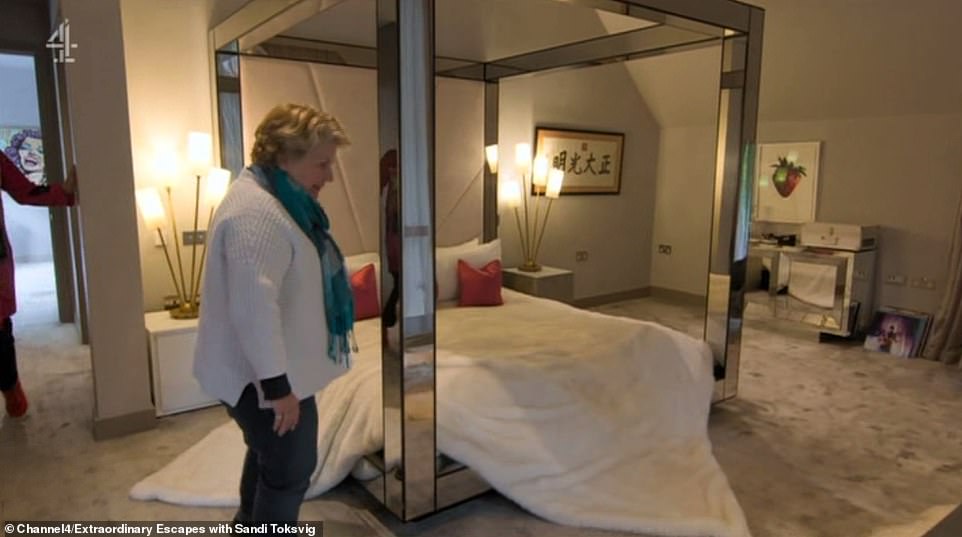 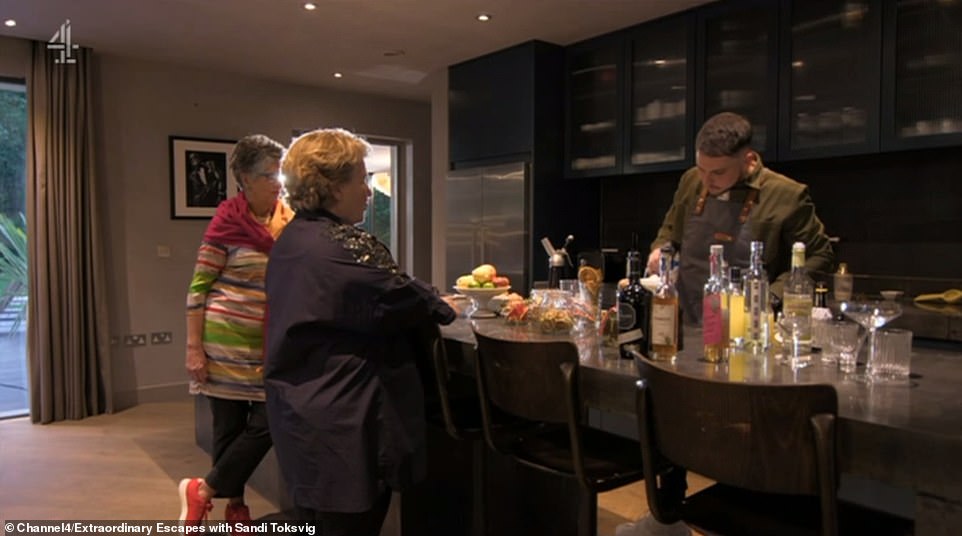 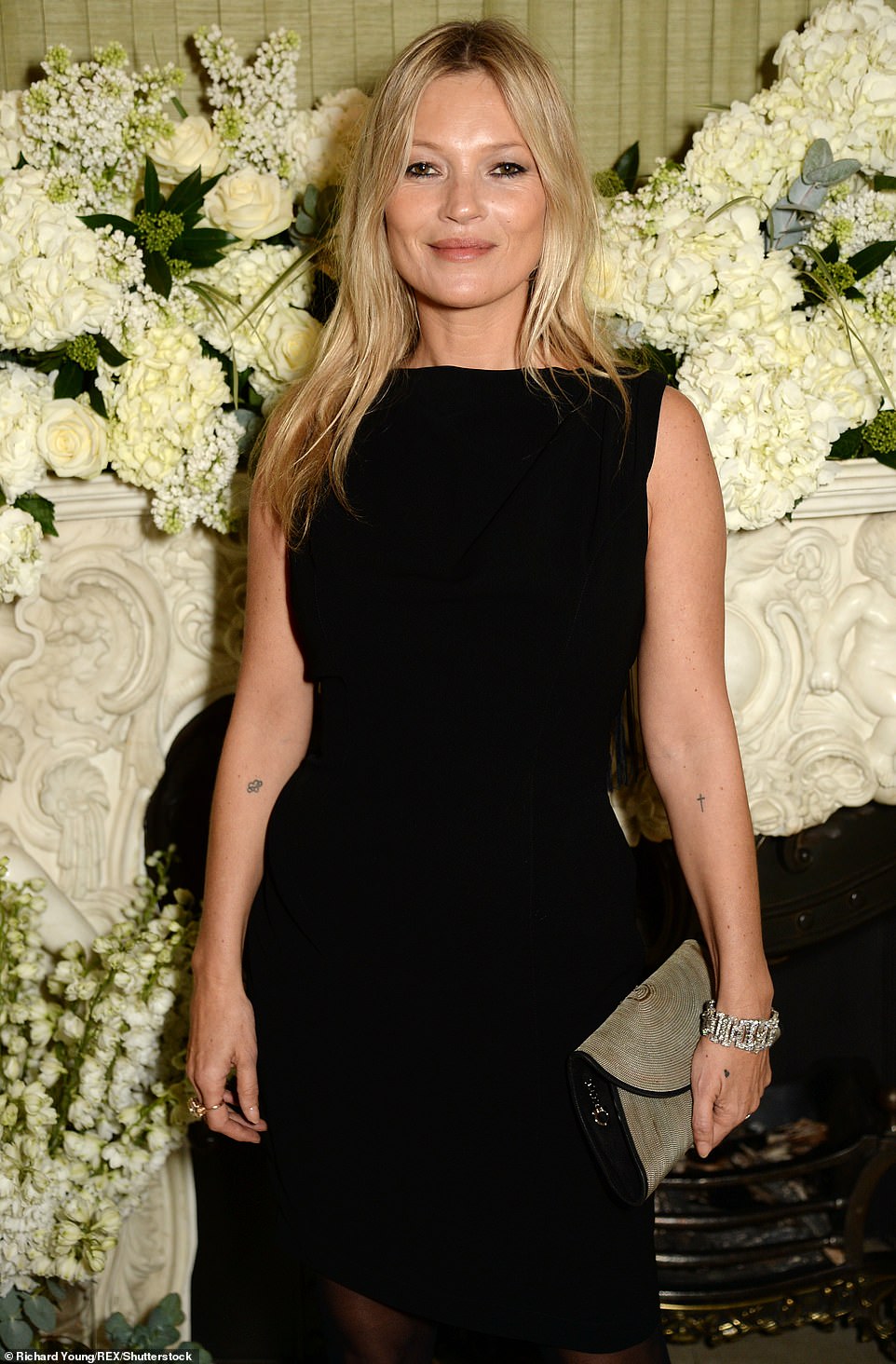 Kate Moss designed the interior of the house. Pictured, at the British Vogue Fashion and Film BAFTA party, Annabel’s in London on 10 February 2019

As they entered the world of glitz and glamour, Sandi and Prue first noted the high ceilings, before Sandi clocked a piece of striking artwork and joked: ‘That’s the best use of a glue gun I’ve ever seen.’

Elsewhere, Prue, who isn’t afraid to make a bold statement with her choice of clothing, praised the statement colours used throughout the house – particularly the living room.

‘What about this for a party room?’ said Prue, to which Sandi replied: ‘That is stunning!’

Prue continued: ‘It’s just such a relief because for the last 15 years every smart place I’ve ever been in has been all white or all grey or at the most greige – a little bit of beige. But this is just full of colour. I love colour!

Along with a guitar they found in the living room, the curtains also struck a chord with the duo.

‘I love these curtains – aren’t they fantastic?’ said Sandi, to which Prue explained: ‘Now that’s called Italian springing because with opera they realised they had to spring the curtains from the back. 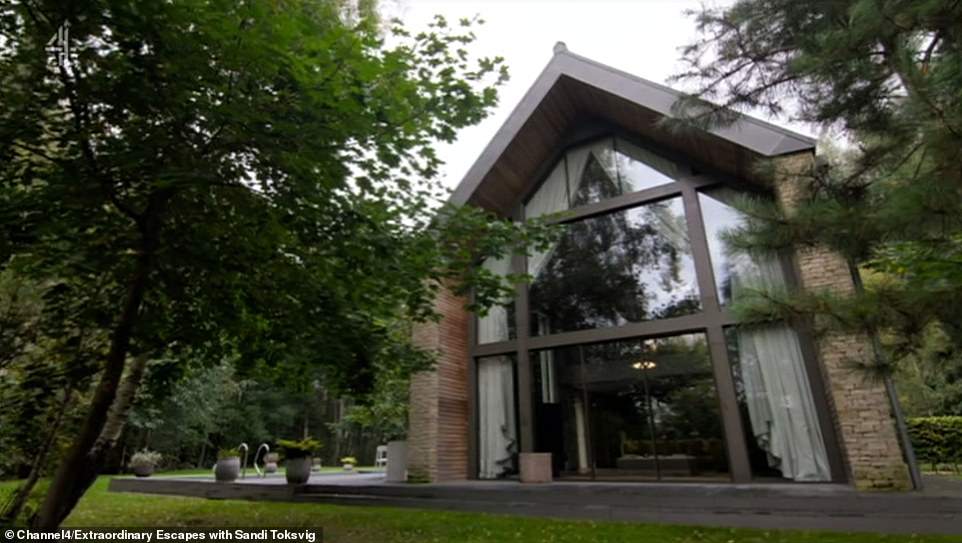 The property went on the market last year for £3.5 million and reportedly is rented out for between £10,000 and £25,000 per week, according to Gloucestershire Live. Pictured, the exterior 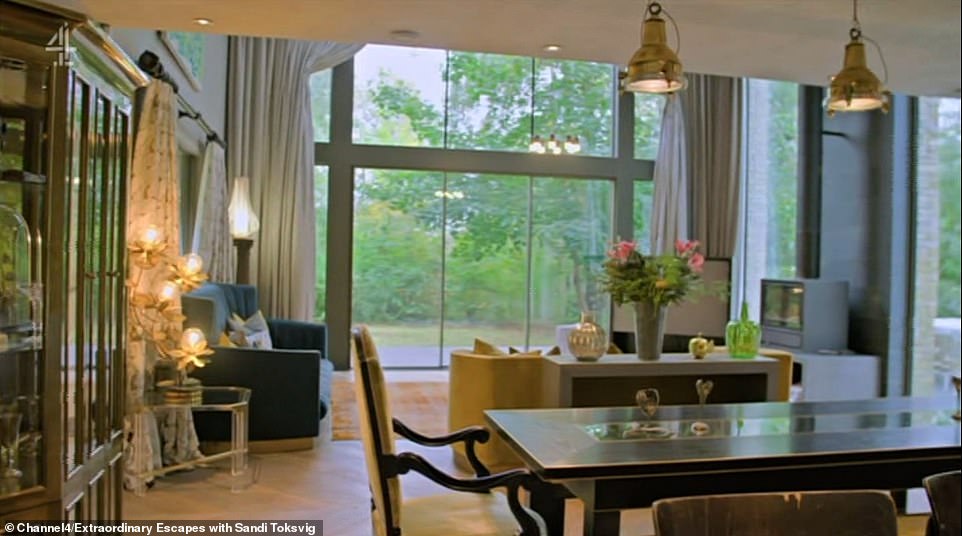 Prue, who isn’t afraid to make a bold statement with her choice of clothing, praised the statement colours used throughout the house. Pictured, the fun and frivolous living area 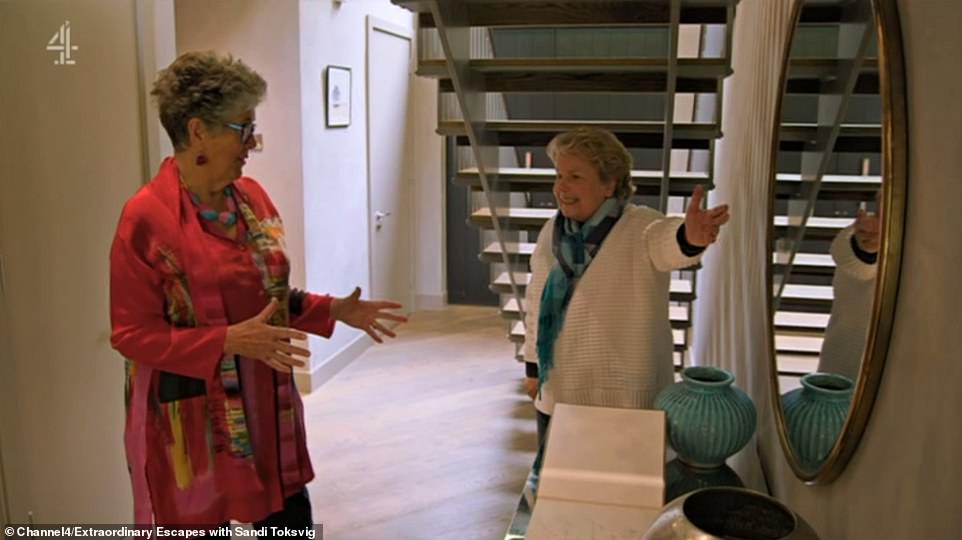 Sandi and Prue first noted the high ceilings and after quickly discovering the glitz and glamour of the luxurious property, weren’t shocked to learn it was a house designed by Kate Moss. Pictured, the hallway 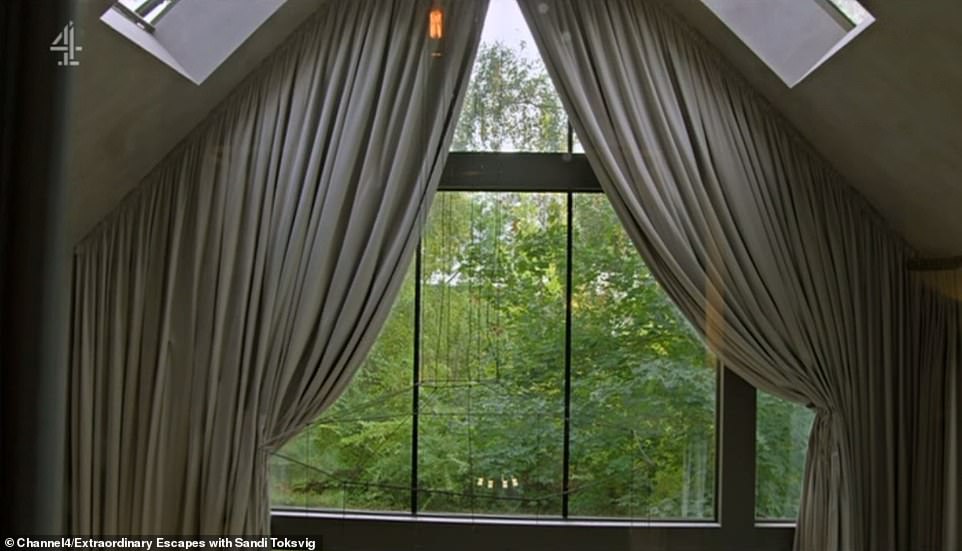 Sandi complimented the curtains which featured Italian springing (pictured) – and joked: ‘Outside of the theatre I’ve never seen such big curtains!’ 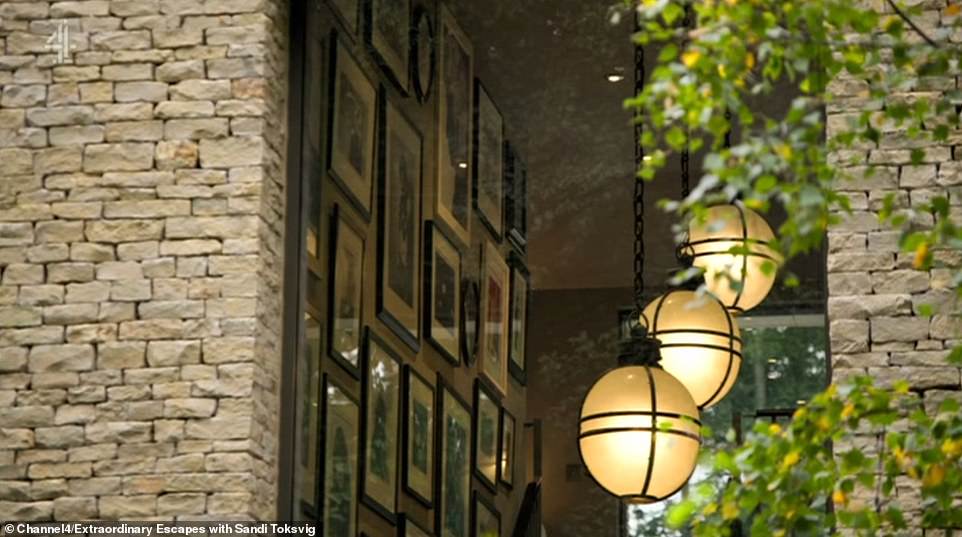 One viewer praised the ‘lovely early 20th century elements’ and added the pool is a big draw. Pictured, the glamorous interior design 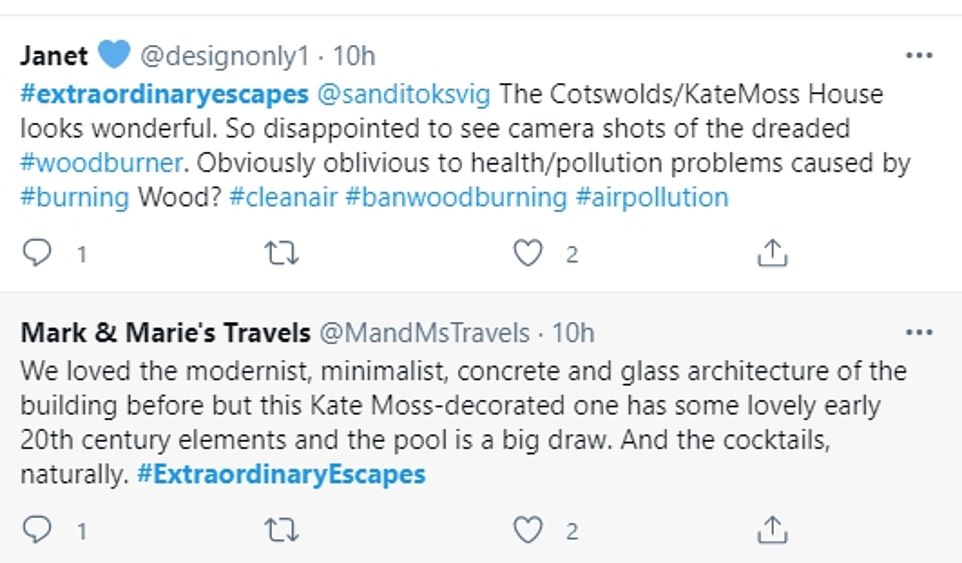 Sandi quipped: ‘Outside of the theatre I’ve never seen such big curtains. Marvellous!’

Exploring the impressive garden, Sandi and Prue were delighted to discover a swimming pool – complete with its own decking and sunbeds.

‘I mean, how glamorous is this?’ said Sandi. ‘You can sit here, a little drink – maybe wave at our friends on the terrace. Oh I love this!’

Next, the pair went on to explore the mezzanine master bedrooms – which featured silk carpet, its own record player and a striking mirrored four-poster bed by David Haddock. 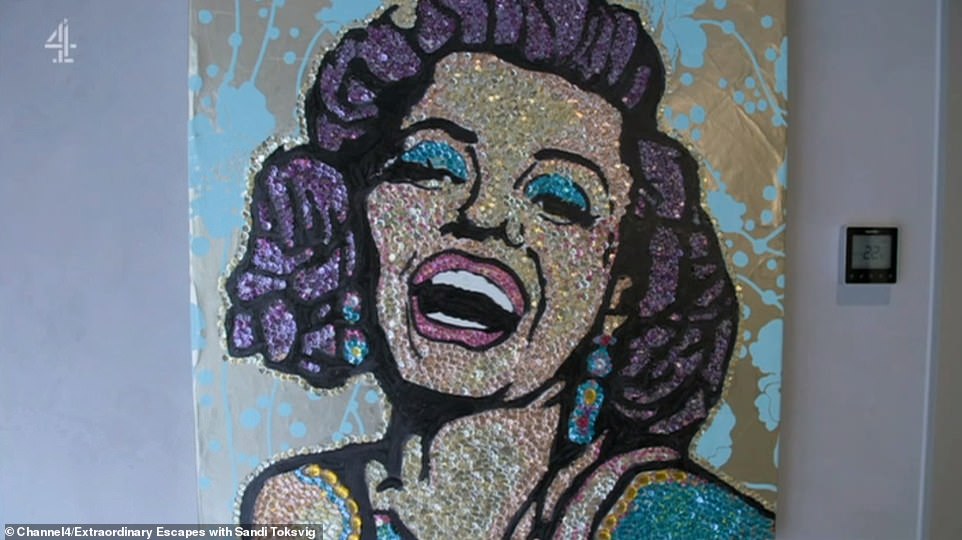 Sandi clocked one of the many pieces of glitzy artwork (pictured) and joked: ‘That’s the best use of a glue gun I’ve ever seen’ 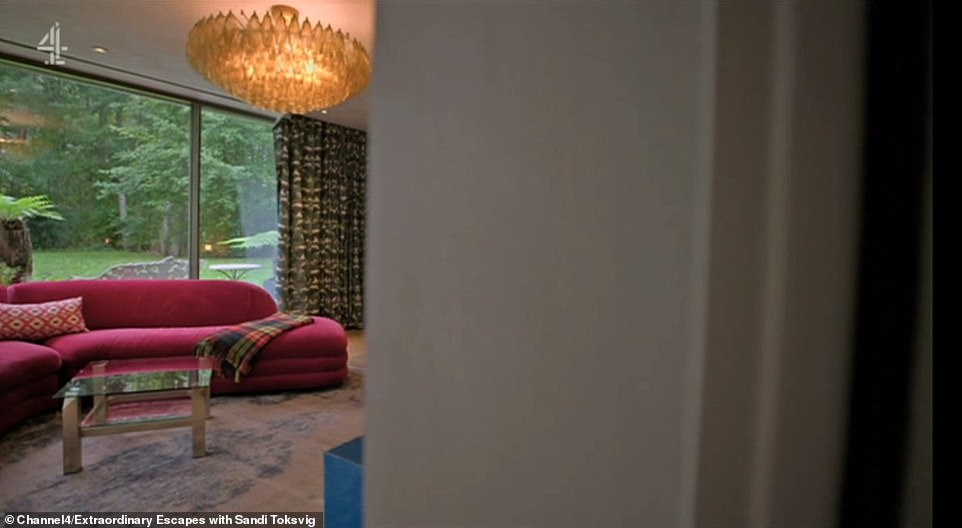 Prue and Leith were blown away by the bold colours used throughout the five-bed property – including the sofa. Pictured, living area

‘This is really a very comfy, sexy room, isn’t it?’ said Prue, to which Sandi joked: ‘I feel like your husband should be here really and I should just go and make you tea.’

Prue quipped: ‘No, we won’t want tea for a while, darling!’

Taking to Twitter following the grand tour, one viewer penned: ‘The Kate Moss-designed house in the Cotswolds where it has a Crossley turntable in the bedroom. *scratches drawing pin across record.*

A second commented: ‘I wonder how much Kate Moss’s gaff costs.’

But not everyone felt the same, with another writing: ‘The Cotswolds/KateMoss House looks wonderful. So disappointed to see camera shots of the dreaded #woodburner.

Taking to Twitter, one impressed viewer penned: ‘This house designed by Kate Moss is stunning! The interior is so nice!’ (pictured)