‘Family always comes first’: Who will turn up to Murdoch’s 90th birthday?

It’s shaping up as one of the most intriguing guests lists of the year: which family members will be invited to celebrate Rupert Murdoch’s upcoming 90th birthday with the billionaire expat media mogul? 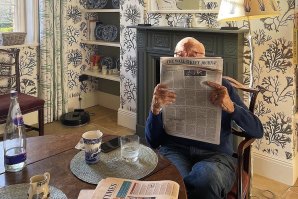 Rupert Murdoch captured in his element: reading one of his many newspapers at home.Credit:Instagram

And even more tantalising, given the endless Machiavellian machinations within the all-powerful family, is the prospect of who will actually show up.

Will James Murdoch be there? 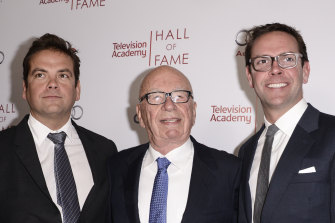 James and his wife Kathryn publicly cast shade on Rupert in January with stinging criticism of one of his most precious personal possessions – his media empire. However I have been assured by well placed sources that they were very much involved in top secret plans to mark the patriarch’s birthday milestone.

But there’s no denying the couple’s very public falling out with the family firm has caused deep, simmering rifts within various familial ranks, not least with Murdoch’s heir apparent, eldest son Lachlan Murdoch.

There have been reports the brothers are no longer on speaking terms, but others in their orbit say that’s not quite the case. Either way the brothers’ uneasy relationship should make for interesting cocktail banter with the birthday boy.

The Murdochs are no strangers to Shakespearean drama when it comes to family and business: various members have fallen in and out of favour many times over the years. 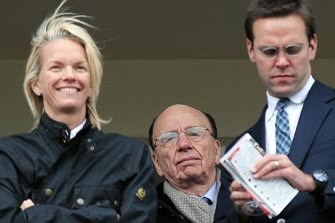 Elisabeth Murdoch had harsh words for her brother James during the phone hacking scandal of 2012. And years before that Lachlan returned to Sydney after turning his back on his father’s empire. But in the end, both he and his sister returned to the fold.

All the Murdoch associates I spoke with for today’s column are adamant that despite what may be played out in the boardroom and in the business press, in the private confines of the Murdoch family living room “family always comes first”.

Murdoch, who spent most of the global pandemic locked down in England with his fourth wife Jerry Hall, was among the first to get his COVID vaccine jabs and has since decamped to his home in California.

It was there, at his Moraga Vineyards estate in swanky Bel Air, that he was preparing to celebrate his 89th birthday this time last year. That party was cancelled at the 11th hour as the seriousness of the pandemic became clear, even while some of the Murdoch media’s most vocal commentators were still arguing the health crisis was a beat-up.

The sprawling estate is where Murdoch is likely to spend his 90th birthday on Thursday. But I can reveal a much bigger celebration for the media titan is being planned in California for later in the year once the COVID-19 vaccination rollout is more advanced in the US.

I have been assured by sources close to the family it is an “all-in” situation for the big party including the James Murdochs. Each of Rupert’s six children have been heavily involved in the planning, including his only Australian-based child, his first born, daughter Prudence, who is unable to be in California on Thursday because of the international travel ban. 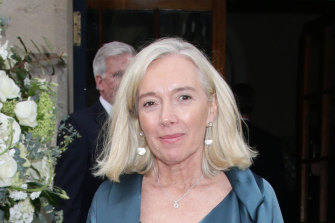 Unlike her adult half-siblings Lachlan, James and Elisabeth, Prudence has largely lived her life out of the spotlight, preferring the relative obscurity of home in Sydney and lengthy stays at her country estate in the New England tablelands with her husband Alisdair MacLeod .

But that has not always been the case.

Back in 2008 she and her adult siblings gave extraordinarily candid interviews – with their father’s blessing – to author Michael Wolff. What they shared formed some of the more illuminating chapters in Wolff’s controversial biography of Rupert Murdoch.

Prudence was portrayed in Wolff’s book as the “truth teller”.

At the time Murdoch was a spritely 77-year-old with a penchant for home dye jobs which turned his hair a dodgy shade of aubergine, which then gradually became a shade of Orangutan ginger. He was also still married to his third wife, Wendi Deng, the mother of his two youngest daughters Grace and Chloe.

Prudence told her father: “Dad, I understand about dyeing the hair and the age thing. Just go somewhere proper. What you need is very light highlights.”

She then revealed to Wolff: “But he insists on doing it over the sink because he doesn’t want anybody to know. Well, hello! Look in the mirror. Look at the pictures in the paper.”

It was a rare insight into the humanity – and vanity – of a man many believe to be anything other than ordinary flesh and blood.

When Wolff interviewed Lachlan Murdoch, the then 36-year-old told the author somewhat drolly: “Don’t you know my dad’s never going to die?” 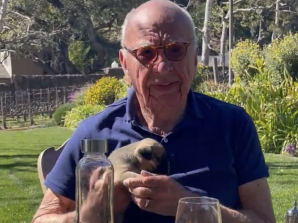 Thanks to Instagram, it has been Rupert’s youngest daughters who have offered glimpses into the private, and comparatively ordinary, world of the global media mogul as he enters his 90s.

Their posts show a man of advanced years, a doting dad who was cuddling a new puppy on Grace Murdoch’s social media feed last week.

It’s a far cry from the much-feared and all-powerful king maker who has dominated headlines for decades.