Ice, ice, baby! Father-of-two FREEZES his children’s toys and gives them spoons to break them out so he can eat his lunch in peace during lockdown

A father-of-two who needed to keep his children occupied through lunch froze their toys in water to get some me time.

Duncan Gillespie, from Sheffield, found the perfect way to keep his children busy during his lunch hour by freezing their toys.

Sharing a sweet clip on Twitter, the ingenious dad revealed he had only given his boys two spoons in order to break the ice little by little, freeing some time for himself in the process.

Parents on Twitter loved the idea, with many vowing to do the same to keep their youngsters occupied. 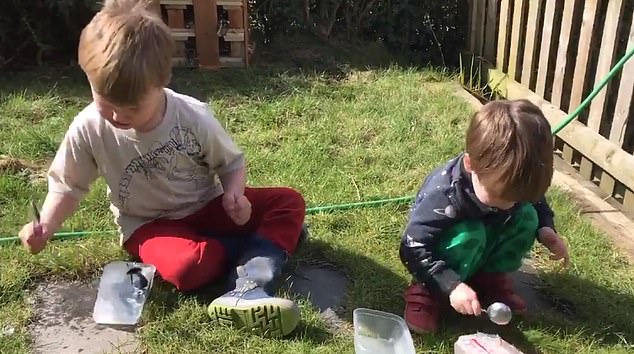 Duncan Gillespie, a father-of-two from Sheffield, found the perfect way to keep his children busy during his lunch hour by freezing their toys (pictured)

The short video sees the two boys tirelessly hitting the ice in the hope of getting to their toys.

‘I’m need to get you out of there,’ the youngest boy can be heard saying, while he taps on the ice with the bottom of his spoon.

‘Just froze the kids toys in ice and gave them only spoons to free them. Time for a bacon sandwich and some coding,’ Duncan wrote in the tweet.

The ingenious dad only gave his boys spoons to free their toys from the ice, in order to enjoy a sandwich and get things done

Many parents found the idea hilarious.

‘Haha great minds – I’m currently doing the same thing,’ said a mother who shared a picture of her girl using a wooden mallet to smash the ice cubes containing her toys

‘Wait till they discover the microwave,’ joked one, while another branded his efforts as ‘top parenting’. 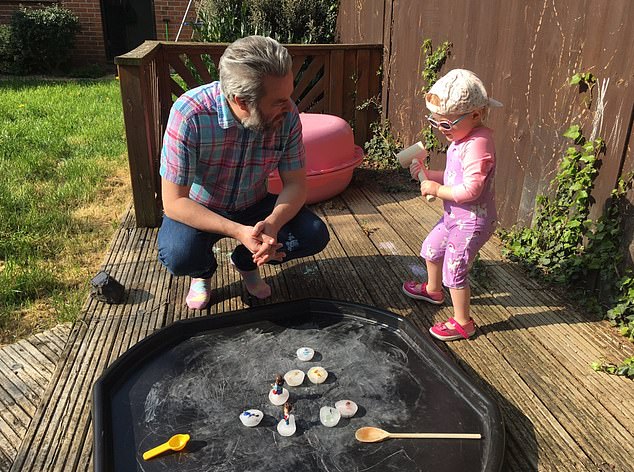 ‘That is genius. I’m doing it,’ said another.

Many were curious to know how long it took for the children to get to their toys, and Duncan kindly obliged.

‘They completed the rescue, but it took about 90 minutes,’ he replied.

Parents loved the idea, with many saying they would try it with their own children and other asking how long it took to free the toys. Answer: 90 minutes