Foreign buyers face scrutiny on every bid after sharemarket slump

Foreign buyers will be slapped with tougher rules to prevent them acquiring Australian companies during the coronavirus crisis amid plunging share prices and fears of predatory takeovers.

Treasurer Josh Frydenberg moved on Sunday night to slash a key takeover threshold from $1.2 billion to zero in order to ensure any overseas bid could be blocked at his discretion after scrutiny by federal officials.

While the new rules apply to all overseas buyers, they come after The Sydney Morning Herald and The Age revealed Chinese companies had snapped up medical supplies in recent weeks for shipment to their home country. 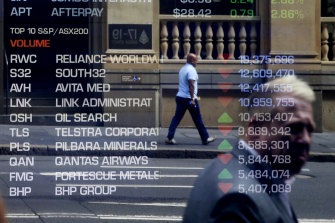 Shares have been belted by the pandemic.Credit:Mark Evans

Mr Frydenberg said the agency that screens takeover bids from offshore, the Foreign Investment Review Board (FIRB), would also extend the deadlines for existing and new applicants from 30 days to six months.

“This is not an investment freeze. Australia is open for business and recognises investment at this time can be beneficial if in the national interest,” he said.

“However, these measures are necessary to safeguard the national interest as the coronavirus outbreak puts intense pressure on the Australian economy and Australian businesses.”

Mr Frydenberg said the temporary change would be achieved by reducing to zero dollars the monetary screening thresholds for all foreign investments.

Investors from nations with free trade agreements have not required FIRB approval for acquisitions below $1.2 billion, but the government’s new policy cut that threshold to zero from midnight on Sunday.

Concerns about foreign takeovers emerged last week as Liberal MPs including Andrew Hastie and Tim Wilson warned of the exposure of Australian companies due to the fall in values on the Australian Securities Exchange.

With the All Ordinaries index closing at 4874.2 points on Friday, down from 7255.2 points on February 20, major Australian companies have seen their market values slashed.

“More than ever, we need to protect ourselves from geo-strategic moves masquerading as legitimate business,” Mr Hastie told The Sydney Morning Herald and The Age last week.

The threshold for acquisitions in these areas will also be cut to zero from the previous threshold of $275 million.

The new threshold will also apply to agricultural land, which was subject to a range of thresholds according to the sensitive nature of any purchase and the country of origin of the buyer.

The federal government's concerns about foreign buyers grew in recent days after revelations that at least two companies, Risland Australia and Greenland Australia, ordered staff to buy medical equipment and health supplies in Australia so they could be packed and sent to China.

While the product purchases were not covered by FIRB, the actions raised the question of whether foreign companies would act in Australia’s national interest during the crisis in responding to the COVID-19 virus.

Mr Frydenberg has the power as Treasurer to accept or reject a foreign acquisition after gaining advice from FIRB, which he is not bound to follow.

The government said it would prioritise urgent applications for investments that "protect and support" Australian business and Australian jobs.