A former media adviser to cabinet minister Alan Tudge has described their affair as emotionally abusive and on one occasion physically abusive.

Rachelle Miller released a statement before addressing media in Parliament House on Thursday, saying she wanted to tell more of her story, which first became public in an ABC Four Corners program a year ago. She said she’s speaking out again in part because she wants the nation’s leaders to implement in full the recommendations from a review of parliamentary workplace culture. 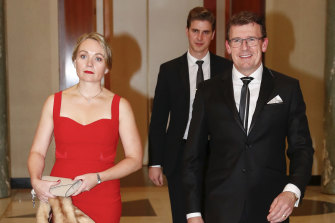 Rachelle Miller and Alan Tudge arriving at the Midwinter Ball together in 2017.Credit:Alex Ellinghausen

“I am fully aware that a year ago I said my relationship with Minister Alan Tudge was a consensual relationship, but it’s more complicated than that,” she said in a statement on Wednesday.

“I was so ashamed, so humiliated, so scared, so exhausted. I told the small part of my story I was able to manage.

“There were times when he was kind, we had great conversations, we did a lot of amazing work together, through such tough times.

“But that happens in abusive relationships, as so many women know. You keep going back, hoping you’ll get the nice version.”

Ms Miller said the “bullying, intimidation, harassment” she experienced from Mr Tudge while at work destroyed her confidence in her own abilities.

“This relationship was defined by a significant power imbalance, it was an emotionally, and on one occasion, physically, abusive relationship,” she said.

Last November, Mr Tudge issued a statement admitting he had a relationship with Ms Miller while he was married to his wife.

“I regret my actions immensely and the hurt it caused my family,” he said. “I also regret the hurt that Ms Miller has experienced.”

Ms Miller on Thursday outlined an incident when she alleged she and Mr Tudge were Kalgoorlie for an announcement with then-prime minister Malcolm Turnbull and the minister took her to the hotel bar for a drink at the end of a long day.

At 4am the next morning, she was woken by a phone call from a television producer wanting to get the minister on for an interview.

“I started to talk to her to arrange a time, but I was still half asleep. Then I felt someone kicking the side of my hip and leg as I tried to sit up in the bed,” Ms Miller said in her statement.

“It was the minister. He was furious, telling me to ‘get the fuck out of his bed’. I quickly told the producer I would call her back. I then realised I was completely naked.”

After she managed to get dressed, return to her room, organise a series of media interviews for Mr Tudge, she says she took a shower and “had a moment to think”.

Sex Discrimination Commissioner Kate Jenkins on Tuesday released a report on parliamentary workplace culture, which found one-third of workers surveyed had been sexually harassed, and a quarter of those by a parliamentarian.

“This is entirely a men’s issue, and specifically, the men in this building. The Liberal Party doesn’t have a women problem, it has a men problem,” she said.

“Labor have stayed quiet because they have just as many skeletons. The two major parties will work together when it comes to protecting each other.

“Unfortunately, it’s a sad reality that the perpetrators are the ones who must change the laws to make themselves accountable.”