Home » Lifestyle » Free childcare for all, but Morrison vows to go back to old ways

Free childcare for all, but Morrison vows to go back to old ways

Prime Minister Scott Morrison is vowing to return to conservative economic policy-making "on the other side" of the COVID-19 crisis after he made childcare free for all families as part of the government's $196 billion spending on pandemic stimulus. 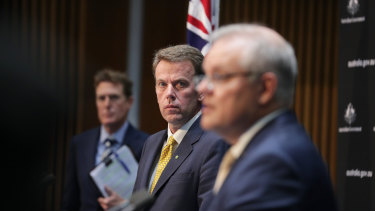 Australia's childcare funding system will be transformed in a bid to keep as many of Australia's 13,000 centres as possible open, prioritising care of vulnerable children and children of essential workers as part of government efforts to prop up the economy.

Mr Morrison warned the dramatic interventions into every part of Australia's economy were temporary and will be wound back once the coronavirus threat has passed.

"There is a snap back there, a snap back to the previous existing arrangements on the other side of this," he said on Thursday. "There is an intensity of expenditure during this period. And then we have to get back to what it was like before."

The Morrison government has committed $196 billion in stimulus and survival packages in recent weeks, including doubling the dole and providing $130 billion to subsidise up to six million workers' wages. The response has been largely welcomed by economists, union and business leaders, and backed by Labor, but is expected to push up national debt to $1.5 trillion next year.

Nationals MP Barnaby Joyce this week warned Australia will suffer from a "debt nightmare" while former Reserve Bank of Australia governor Bernie Fraser has said the government faces a financial "reckoning". Mr Fraser suggested the government may have to reassess existing spending measures such as tax cuts.

The $1.6 billion suspension of the childcare subsidy system has been welcomed by early education and care providers and advocates, who say the measures will help keep centres open and provide employment for a 200,000-strong workforce.

"It will be a system which will mean parents will get their children cared for for free," Education Minister Dan Tehan said.

"What we will be doing is turning off the old system and going to a new system, which will provide that relief to parents."

Free childcare will be available to all families from next week, subject to availability, but Mr Tehan said preference would be given to children of essential workers, disadvantaged children and previously enrolled children.

"The most important of those are those essential workers and the vulnerable children," he said.

Mr Tehan encouraged any parents who had terminated enrolments to get back in contact with their childcare centre.

Mr Morrison said the official medical advice on children attending childcare was clear and had not changed.

"There is no health risk in children going to school or childcare," he said.

Under the new system, means-testing for childcare subsidies will be suspended. The government is also waiving the gap fee for parents who have been paying for childcare, backdated to March 23.

"Families will now continue to have access to the services they trust, and services know they can stay open with core jobs secured," chief executive Samantha Page said.

"For families who want to keep their children at home, there is no longer a terrible choice between paying a gap fee and losing their place at the service."

The Early Learning and Care Council of Australia said the measures would encourage families to put children back in care and resume their early education.

"ELACCA is also very pleased that frontline workers and children experiencing vulnerability and disadvantage will have priority of access to early learning and care services across Australia," said chief executive Elizabeth Death.

Under a $1.6 billion measure, providers will be paid 50 per cent of their fee revenue up to the existing hourly rate cap based on enrolment levels before the mass exodus of children at the start of March.

To be eligible for the payments, providers must stay open, not charge any fees and prioritise care for children of essential workers, vulnerable and disadvantaged children and those previously enrolled.

"They must also seek to re-enrol those parents who might have dropped off," Mr Tehan said.

Mr Tehan said 60 per cent of the costs of a childcare centre were wages and noted the previously announced JobKeeper wage subsidy would also be supporting the sector "to the tune of over $1 billion".

After school care and vacation care services will also be able to access the payment, taking the entire package to $1.6 billion, on top of the JobKeeper subsidy.

"The old system is quite a complex system. It was drafted for a pre-pandemic time. What we needed to be able to do with reductions in attendances is look at how we could put in place a new system which would adjust for that," Mr Tehan said.

He said the temporary system would be reviewed after one month and in place for at least six months. Eventually the government will "look to evolve back to the existing system".

According to the latest figures, 1.34 million children from 945,000 families were enrolled in childcare and early learning before the COVID-19 crisis. Average weekly use per child was 24.7 hours.

The country's largest childcare provider, Goodstart Early Learning, does not currently qualify for the JobKeeper package because its turnover exceeds $1 billion and Mr Tehan said discussions were ongoing about support for the company. In a press conference on Thursday, he said the company makes $100 million in profit annually.

The company, which operates 665 centres, immediately rejected the claim, saying it was a not-for-profit and its operating surplus was $11 million last year. It estimates a loss of $20 million this year.

"Today’s announcement offers no certainty for our educators and teachers. Nor does it offer any comfort for the 3000 casual educators we had to stand-down last week," the company said in a statement.

The company must demonstrate a 50 per cent reduction in turnover to access JobKeeper subsidies, without which it says "we will not be able to keep our centres open – not for essential workers and vulnerable children now and not when the rebuild begins".

"Many Australian families were already struggling to pay child care fees prior to the current crisis, and this has only been made worse as many parents have lost income. Today’s long-awaited announcement of fee relief is welcomed," she said.