Home » Lifestyle » From the Archives, 1983: Duntroon probe over sadism claims

From the Archives, 1983: Duntroon probe over sadism claims

The Minister for Defence, Mr. Scoles, has ordered a full report on detailed allegations of sadism and brutality among cadets at the Royal Military College, Duntroon. 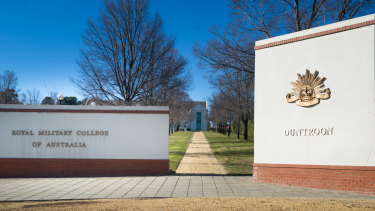 His action follows information given to ‘The Age’ by three cadets who resigned from Duntroon after their five week initial training period.

Mr. Scoles said yesterday that he would seek an immediate report from the college commandant on the allegations, which involve the cruel and humiliating treatment of junior cadets by senior cadets.

He said an inquiry would be called if the report substantiated the allegations, which ‘The Age’ publishes in Saturday Extra today.

The latest allegations come 14 years after a judicial inquiry into the practice of ‘bastardisation’, which had become ingrained in the college’s training system. Punishments levied on cadets before 1969 included being ordered to climb the college flagpole at night if they were unable to give its correct height – 75 feet 6 ½ inches.

The cadets wish to remain anonymous because of possible repercussions. They have breached military law – and the college’s “code of silence” – to make their allegations public.

They say that intermittent violence punctuates constant humiliation and persecution of junior cadets which begins on the first day of training.

They allege that as many as four cadets were admitted to the college hospital in February because of injuries inflicted by senior cadets. One of the cadets suffered a fractured jaw and another was kicked in the groin.

They further allege that in the first week of training a junior cadet fainted with fear after having a loaded SLR rifle pointed at his head.

They also claim that on 30 January some senior cadets clapped and cheered after one of them announced that it was the 50th anniversary of Hitler’s rise to power, and that on another occasion a junior cadet was forced to say that he like to wear sadomasochistic clothing.

First-year cadets found it difficult to maintain the stringent physical and academic training standards because of harassment by senior cadets who have the authority to punish, they said.

The harassment, described by one cadet as “psychological warfare”, included:

Mr. Scoles said after reading the allegations at his Geelong office yesterday: “I will be asking for a report from the commandant immediately but there would probably be great difficult in preparing any reports before Tuesday. There will obviously be a fair few people to be interviewed.”

The college commandant, Major-General H. G. (John) Coates, told ‘The Age’ last night: “I have already put a Press statement through Army public relations. I think at this stage of the game that’s all I can do.”

An army public relations officer, Colonel Murray Taylor, said: “Bastardisation or any excessive behavior of any kind is not tolerated at the Royal Military College. The commandant’s policy is clear, is enforced by the staff and has been restated to the Corps of Staff Cadets by the commanding officer of the corps. Any suggestion of bastardisation is investigated thoroughly until found to be groundless.”