The trial of a West Australian police officer accused of murdering a woman in the state's Mid West region last year may be heard in Geraldton if an application by the man's lawyers is successful.

The constable, whose identity is suppressed due to safety concerns for his family, pleaded not guilty to the murder of Joyce Clarke when he appeared via video in Perth's District Court on Monday morning. 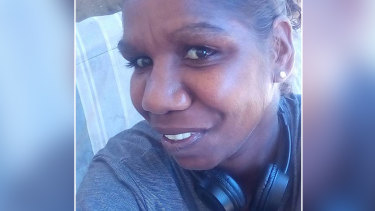 Joyce Clarke was shot dead by police in Geraldton. This photo has been published with the permission of Ms Clarke’s family.Credit:Facebook

Ms Clarke, 29, was fatally shot last September after her sister called triple-0 asking for help when she began acting erratically.

She had days earlier been released from Bandyup Women’s Prison after serving time for stealing a mobile phone and then setting fire to her cell because she thought “spirits” were inside.

On the day she died a witness said he saw Ms Clarke walking down the street holding a knife in her hand, when a police car began driving slowly alongside her, talking to her out the window.

Three more police cars entered the street and eight officers got out of the vehicles. Police told Ms Clarke to drop the knife, before she allegedly lunged at a first class constable who shot her once in the stomach.

The incident sparked tension in Geraldton at the time, with about 100 protesters attending the local police station holding signs that said "black lives matter" and "is it open season on blackfellas?".

A police officer has not been charged with murder in WA for more than 90 years.

Before the trial can be heard in Geraldton a report will be submitted to the court addressing safety issues that may arise if the matter is listed in the regional centre.

The case is next listed in court on October 10, when a decision is expected on where the trial will be heard.