GOAT on the move? Lionel Messi tells Barcelona he wants to leave club

Lionel Messi may be leaving the only club he's ever played for professionally.

According to The Associated Press, the Argentinian soccer star informed FC Barcelona on Tuesday he that he desires to move on after 16 years with the team.

The six-time Ballon d'Or winner joined Barcelona's youth academy at 13 and debuted at the senior level in 2004 as a 17-year-old.

Messi's 634 goals across all competitions ranks first all time in club history, and is second in matches (731). Barcelona won 10 La Liga titles during Messi's tenure.

Messi's salary – nearly one million Euros per week – means that only a select few clubs in Europe will be able to afford his services while adhering to UEFA's Financial Fair Play regulations.

Ronald Koemen took over for the fired Quique Setien recently, and Messi, 33, met with the new coach last week, per multiple reports. Club president Josep Bartomeu and Koemen both publicly said they counted on Messi to stay. 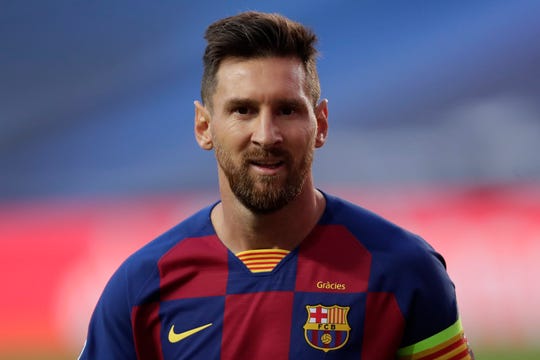 The team finished second behind Real Madrid in La Liga this season and were knocked out of the Champions League in a humiliating 8-2 loss to Bayern Munich earlier in August.