STAYING stars, new kids on the block and plenty of hot handicaps. Glorious Goodwood is here.

Stradivarius is the star of the show, but there are a bundle of betting opportunities throughout. Our man Callum Jamieson takes a look. 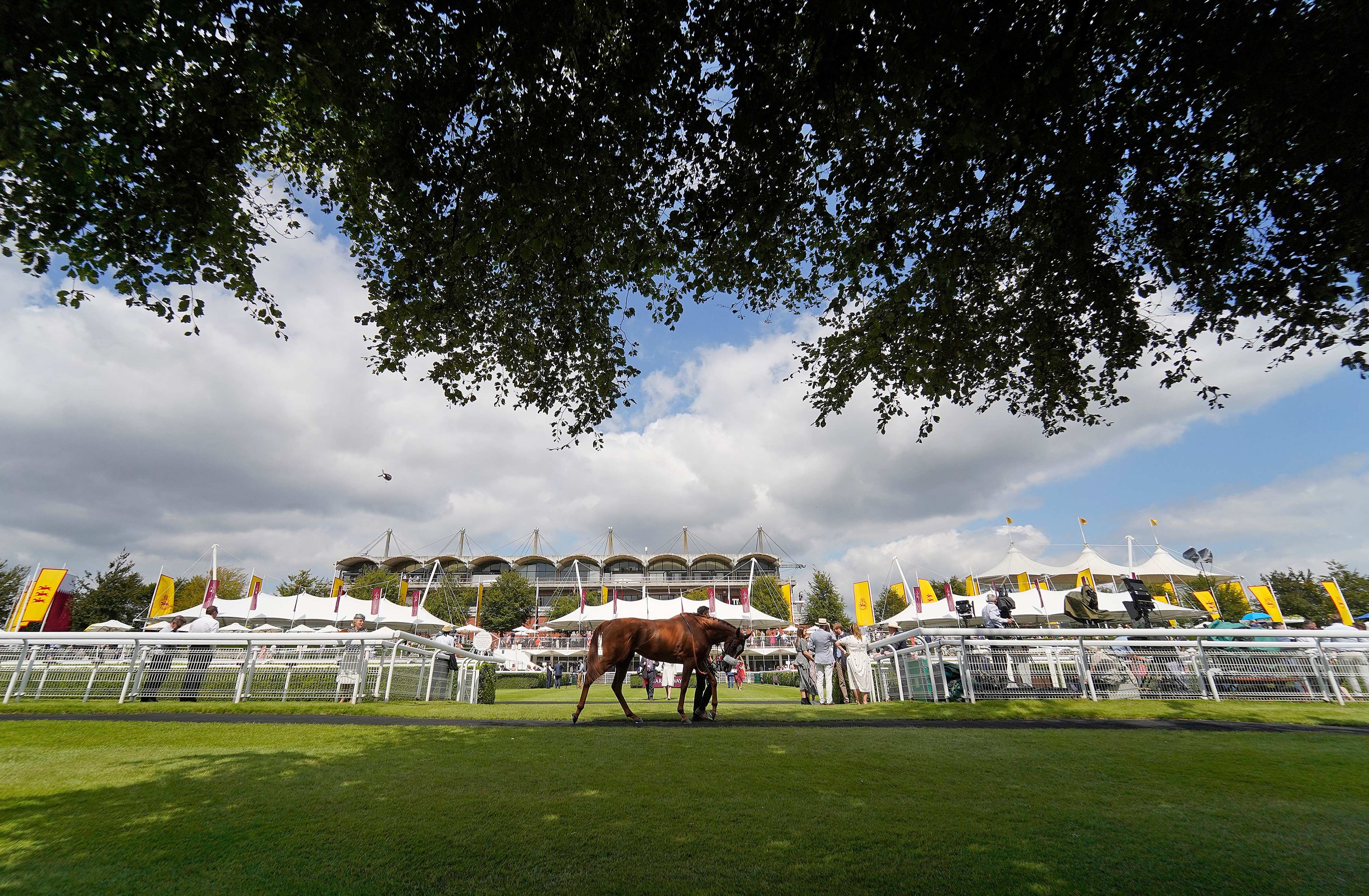 A red-hot competitive handicap to get us underway, as expected.

A good few of these make the shortlist and three-year-olds tend to dominate this heat.

Top of the shortlist is the Charlie Hills-trained VIVIDLY, who broke her maiden tag here at last year's Festival.

She's only had two runs since, and four in total, and is clearly thoroughly unexposed. On her comeback this season she shaped nicely enough from the rear.

But she is a monster filly and will clearly come on for that. A mark of 84 looks gentle enough and Will Buick is a good jockey booking. She may just go under the radar here.

John Gosden has been in great nick and his Wassaayef has obvious claims. It's her first outing at three after three solid efforts as a juvenile.

That form is some of the best on offer, but she hasn't been missed by the handicapper off of 93.

Angel Power is another that has to be respected. She's another lightly-tried three-year-old and was just edged out last time out.

But a 5lbs rise for finishing second is always harsh and this demands more. She'll have to improve.

Ralph Beckett's Declared Interest would have come under close consideration for betting purposes, but her draw in 12 just tempers enthusiasm.

She has a similar race in her in the near future off her current rating.

William Haggas is as good as it gets with these improving fillies and his Tomorrow's Dream has to be a threat with Tom Marquand back in the saddle.

Like London buses, the next handicap is another sizzler with a number of obvious chances lurking.

Maydanny is a good place to start and should not be ruled out off the back of his Newmarket no-show.

Before that, this well-bred but now gelded four-year-old, hosed up on his handicap debut and was backed into joint-favourite for the Silver Hunt Cup. He ran fine there in a race that has worked out very well since.

He sneaks into this off a low weight and it means Silvestre De Sousa is called up to ride him. He's drawn in one and you can expect him to be ridden positively despite the step up in trip to ten furlongs for the first time.He is a big danger.

But FIFTH POSITION is a horse I've always had a lot of time for and has been left alone at the weights for his third in the John Smith's.

There is still more to come from this horse, and why I'd love to see him up in trip to a mile-and-a-half, expect him to be dropped in here from stall ten.

He'll need luck in running as any horse does at Goodwood, but Andrea Atzeni knows him well and the first time blinkers could eke out more improvement. I'd have him plenty shorter in the betting here despite a few arguably being less exposed and possibly better handicapped.

Tinandali caught the eye in the John Smith's when fifth and he has to be respected, especially at double figure odds.

His trainer David O'Meara won this race last year with a similar type.

Derevo looks short enough for me at the top of the market, he was well held at Doncaster last time. Albeit he is likely to kick on for that outing.

Cape Cavalli has shaped well on his last two outings and his progression is unlikely to have finished. A car park draw isn't helpful though.

Red October stole the race from the front at Leicester last time and why more progress can't be ruled out, he's best watched for now.

The first Group race of the week and it's one that's been won by some smart horses down the years. Highland Reel, Pinatubo and Expert Eye just three.

Aidan O'Brien's Battleground is the short-priced favourite and I'd be against him off the back of his Chesham Stakes win at Ascot.

The form of that race is very questionable this year around. Plenty have been beat from the race, and given the rejigged schedule for youngsters, that was always likely to be the case.

At verging on even money, he gets a big fat swerve. It's a favourites race, six of the last eight have won, but there are horses who ran in much better races at Ascot and they make more appeal.

And at double figure odds, although he's shortened since the market opened, Alan King's PAINLESS POTTER looks a great bet.

He's caught the eye on both starts, with a third at Kempton before an improved effort in the Coventry at Ascot.

He steps up in trip to seven furlongs which looks key to his chances, there is plenty of stamina in his pedigree.

It's a sharp seven at Goodwood, but there should be a good gallop on, and the harder they go, the better his chance.

King Zain had no chance after the start in the Superlative Stakes and isn't without a chance. Frankie Dettori is on board.

Dark Lion just about broke his maiden tag last time out at Wolverhampton. He needs plenty more here though and looks short enough.

A return to his Ascot form sees him in there with a shout, though.

Devious Company arguably has the best form in the book. His second in the Superlative was a serious effort.

He was no match for the winner, but was always up with the pace and did well to stick it out for second.

I would put no one off chancing him as well as the selection.

Always a cracking race, seven furlong specialists get their day in the sun at Goodwood in the Lennox Stakes.

And Sir Dancealot has made the race his own in recent seasons and is chasing a hat-trick after winning the last two renewals.

He's never the most consistent, but trainer David Elsworth knows how to get him ready for the big day. It doesn't take a genius to work out that this will have been the date circled in the calendar early in the spring.

But he's been well found in the market and hasn't run up to his usual levels this season.

It's a serious looking race for the level, and I have two fancies. There appears to be little in the way of pace on and it may be worth taking a flyer on Marie's Diamond who could be very dangerous from stall two.

He produced a career best at Newmarket on his comeback run and backed that up with a third in the Queen Anne – rock solid form.

He ran no race in the Summer Mile and it's safe to put a line through that. This should suit him and with Silvestre De Sousa on board again he looks over-priced.

The other dart is Duke Of Hazzard, who simply loves it at Goodwood, winning on all three visits.

I fancied him in the Queen Anne and he disappointed albeit in a race that wouldn't have suited at all.

His Summer Mile third to Mohaather was encouraging and he should be spot on for this. He has no excuses here and the drop to seven is of no concern. A solid pace helps this horse.

Space Blues and Safe Voyage are closely matched on form but look no price in this.

Pierre Lapin is completely unexposed but has plenty to answer after his Commonwealth Cup no show. A big market move for him would be of interest.

A two horse race on paper and in the betting – it's hard to argue against that.

STRADIVARIUS has to give away 15lbs to Aidan O'Brien's Irish Derby winner Santiago. No easy task.

I'd still fancy John Gosden's star to get the job done, but at prohibitive odds I'm more than happy to watch. It's a fascinating clash but a repeat of his Gold Cup heroics and it should be a fourth Goodwood Cup for the star stayer.

Of the supposed outsiders, Eagles By Day is of the most interest for the in form David O'Meara team.

A first race over the flying five on the Downs for the week and I like the chances of Tony Carroll's RECON MISSION.

Tom Marquand has picked him over Caspian Prince and the jockey-trainer combination is always one to watch.

The horse has dropped to an attractive mark – one he last won off – and would have been primed for this after a few pipe openers.

His third at Newbury last time out was solid enough and judged on that a drop to five furlongs doesn't look a problem.

Another horse on the shortlist is Sylvester Kirk's Benny And The Jets.

He produced a blistering performance when winning on his first start of the year at Kempton.

A return to an easier track like Goodwood, plus a helping hand from the handicapper could see him bounce back at a big price.

But veteran sprinter ORNATE needs no introduction and Goodwood is his track.

He was third to Battaash here last season and back in a handicap off a mark of 97 looks too big a price.

He's 6lbs better off with Caspian Prince than when third to him at Newcastle.

A tricky heat for punters here and not one I'll be getting involved with.

Of the nine declared runners, only four have had runs and the standard they set is far from unbeatable.

Keep an eye on the betting for the five newcomers. John Gosden's Tawleed is of obvious interest, but Jim Crowley opts for Marcus Tregoning's ALKUMAIT.

He ran well enough on debut at Newbury and should be better for that run. An improvement on that will see him go close and he gets the tentative nod.

Any Mark Johnston horse demands respect at Goodwood and Majd Al Arab has the benefit of two runs and Ryan Moore in the saddle.

The closing heat is a new addition to the Festival and a bit of a puzzle. There's not much I'm keen on here and will likely keep my powder dry.

The three-year-olds get 11lbs from their elders and that makes them of obvious interest.

The penny has clearly dropped with Dancing Approach of late, but she started life off a lowly mark of 65 and has quickly shot up to 79. This demands more.

ASIAAF looks nicely treated on only her second outing in a handicap and has won at Goodwood. She has an obvious chance.

Trainer Marcus Tregoning could be in for a big week and he has a few fancied runners on the opening day. Keep an eye on his filly in the betting.