Scott Morrison would likely be in high demand on the global Pentecostal conference scene but may struggle to find an audience on the right-wing talk circuit, experts say, as speculation swirls about the former prime minister’s future.

Organisers of CPAC Australia, affiliated with the US Conservative Political Action Conference, said Morrison’s embrace of a net zero emissions target and collaboration with Labor premiers such as Daniel Andrews would not endear him to conservative crowds. 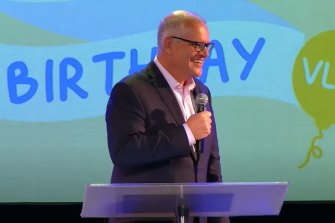 Morrison recently took to the stage in Perth, where he delivered a sermon about trusting God and not governments at Margaret Court’s Victory Life Centre church, and at the Asian Leadership Conference in Seoul, South Korea, where he said his government paid a political price for the COVID-19 crisis and his decision not to pick fights with state premiers.

“Leadership often requires you to take the hit for the mission you are engaged in,” Morrison said. “This was certainly the case when it came to managing our federation during the pandemic.”

This week he is skipping the start of the 47th parliament to address a leadership summit in Tokyo on Thursday and Friday alongside former British prime minister David Cameron and former Canadian prime minister Stephen Harper, among others.

Morrison, 54, remains the member for Cook but is expected to resign during this term and begin a post-politics career. Before entering politics his work was largely in tourism marketing, including a stint as managing director of Tourism Australia. He recently dismissed as “a bit of pub talk” a story that he had sought to join the Australian Rugby League Commission.

He could start earning fees for speaking now, while still a member of parliament, as long as he declares the source and nature of the income in his statement of interests. There is no parliament requirement to declare how much he earns from such engagements.

Several experts in Pentecostalism said Morrison was well-placed to capitalise on his status as the first openly Pentecostal leader of a major English-speaking nation.

Andrew Davies, professor of public religion at the University of Birmingham, said there could be 30 to 40 large Pentecostal conferences a year in the United States that might be suitable for Morrison, though his cachet would suffer if he spoke at too many.

“I think people would want to hear from him,” Davies said. “There is a longstanding tradition in Pentecostalism about the power of testimony; how God has led somebody, how they’ve been used to do good things for God, how God has intervened in their lives and helped them through. They also like stories of influence.”

Pentecostal crowds would also be interested in Morrison’s election loss and how he coped with failure, Davies said. “[They] would want to know how God helped Scott Morrison through that experience and what it was like for him.”

Australian writer Elle Hardy, author of Beyond Belief: How Pentecostal Christianity Is Taking Over the World, said Morrison would no doubt be welcomed on the lucrative conference circuit in Spirit-led church circles, but his durability might be limited.

“I’d question how long he’d be in demand,” she said. “Sure, his title has gravitas, but he’s not an especially charismatic figure – he’s a politician, not a preacher. Can he give an inspiring, positive sermon that resonates with diverse, young crowds? Based on his political career, I would doubt it.”

Some megachurches have been known to pay huge fees to guest speakers; up to $US100,000 ($144,000) for famed Dallas-based Bishop T. D. Jakes. But Joseph Castleberry, president of Northwest University, a Christian college near Seattle, said it was unlikely that Morrison could command such large figures.

“I would be shocked if he had many opportunities to earn as much as $US25,000 for an appearance. That is much less than the secular speaking circuit,” Castleberry said.

“There are virtually no Pentecostal institutions that would pay speaker fees on the scale that former heads of state would find impressive. If Prime Minister Morrison makes an effort to network and make himself available, he will be widely welcomed. But it would be no way to make a living.”

Global leadership events such as this week’s Tokyo summit may be the most attractive option for Morrison when it comes to public speaking. Conservative organisers questioned whether the 30th prime minister of Australia would be invited to events such as CPAC that are more closely aligned with Donald Trump or one of Morrison’s predecessors, Tony Abbott.

“I think it would be a challenge in the short term for him to be fully accepted,” said Andrew Cooper, founder and executive director of CPAC Australia. “There’s a sense that he squibbed it on the reason he got in which was essentially pushing back on the climate net zero issue.”

On Morrison’s management of the pandemic, Cooper said: “Probably the thing that disappoints conservatives most … is the snuggling up to Daniel Andrews and some of the more aggressive premiers. It’s probably more the perception than the detail.”

CPAC Australia has booked a former prime minister to speak at its conference in Sydney in October. Neither Cooper nor CPAC Australia chairman Warren Mundine – who was Morrison’s hand-picked candidate for the seat of Gilmore in 2019 – would name the person, but it is likely to be Abbott or John Howard.

Morrison’s office was contacted for comment and the International Democratic Union was asked about Morrison’s appearance fee at this week’s event in Tokyo. Neither responded.

Cut through the noise of federal politics with news, views and expert analysis from Jacqueline Maley. Subscribers can sign up to our weekly Inside Politics newsletter here.