Invasive grey squirrels carry a parasite that makes their native red cousins sluggish and threatens to further reduce their numbers, a study has found.

Scientists say that the parasite — carried only by the greys — causes red squirrels to forage for food less efficiently and makes competition from the greys harder to face.

The problem is so severe that it could wipe out red squirrels entirely where they share woodlands with the intruders. 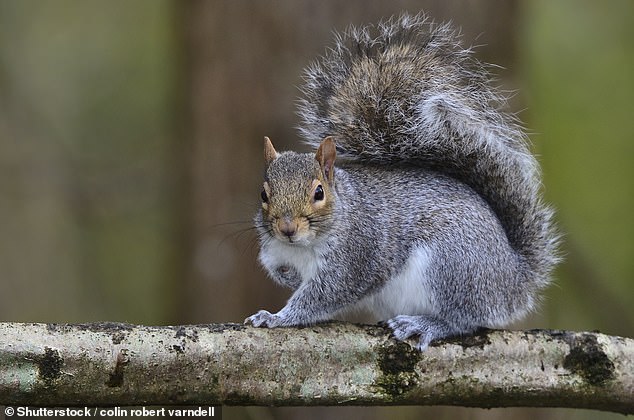 Invasive grey squirrels, pictured, carry a parasite that makes their native red cousins sluggish and threatens to further reduce their numbers, a study has found

Red squirrels normally carry only one type of parasitic worm, or ‘helminth’, in their stomach and intestines — those of the species Trypanoxyuris sciuri.

This means that they are therefore sensitive to foreign parasites transmitted by other animals — including those of the alien grey squirrel.

Grey squirrels in Italy commonly harbour a parasite called Strongyloides robustus, which they can pass on to red squirrels.

Researchers from universities in Italy and Belgium investigated the impact this foreign parasitic worm has on red squirrel behaviour.

They studied populations of native red squirrels that live alongside grey squirrels.

The team compared the behaviour and parasites of these populations with those where only red squirrels were present.

This, in turn, can result in lower food intakes, stunt the squirrels’ growth and lead to lower levels of reproductive success.

It can even decrease the red squirrels’ chance of survival when competing against their grey cousins in the same habitat. 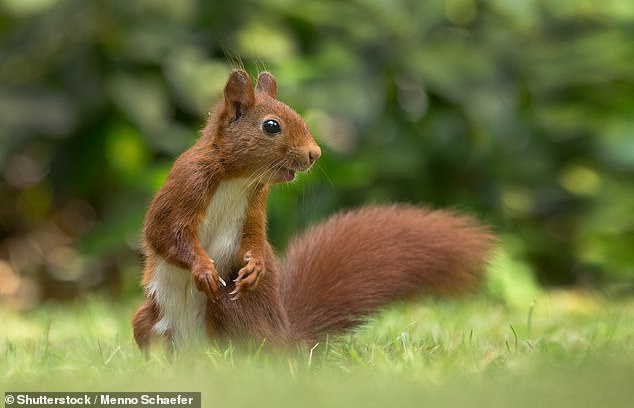 When grey squirrels were present, the reds’ activity also decreased after being infected by the native parasite Trypanoxyuris sciuri.

Both species compete for foods such as hazelnuts and chestnuts when sharing a natural environment.

The authors argue the combination of ecological and physiological impact will lead to the extinction of the red squirrel in just a few years’ time. 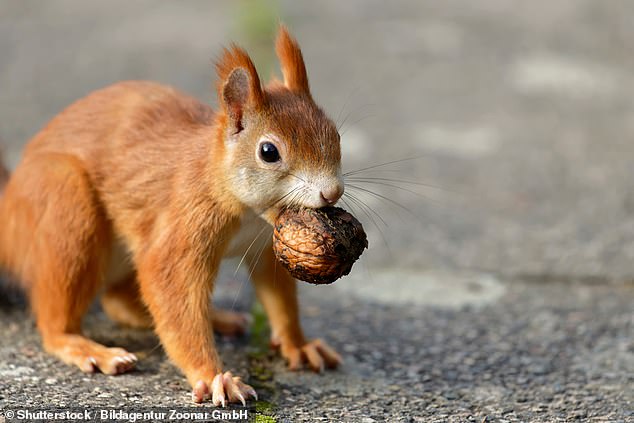 ‘That our red squirrel is threatened with extinction due to the introduction of an “alien” species, the North American grey squirrel, has become common knowledge,’ said paper author Francesca Santicchia from the University of Insubria in Italy.

‘But that one of the mechanisms involved is the reduction of activity, a personality trait that tends to be related to foraging intensity or efficiency, caused by the spillover of a parasitic helminth from grey squirrels is a new finding.’

Fellow paper author Claudia Romeo of the University of Milan in Italy added: ‘This spillover is very similar to what occurs with the Squirrel Poxvirus in the UK and Ireland.’

‘Although in this case of spillover of an endoparasite, the effect is much more subtle and does not lead directly to the death of the animal.’

‘For red squirrels, the “natural” situation is being the only diurnal tree-dwelling mammal in our forests and woodlands,’ said Lucas Wauters, also of the University of Insubria.

‘But when an alien species, such as the grey squirrel, colonises these habitats, it acts as a true environmental stressor and carrier of potentially dangerous parasites.’

‘This is a subtle form of parasite-mediated competition, which may exacerbate the effects of interspecific competition with grey squirrels for food, such as conifer seeds, hazelnuts, or chestnuts.’

The study comes just two years after the researchers discovered that grey squirrels cause an increase in the concentration of stress hormones in red squirrels.

The full findings of the study were published in the journal Journal of Animal Ecology.

HOW IS THE GREY SQUIRREL KILLING THE RED SQUIRREL?

Red squirrels are native to the UK and spend most of their time in the trees.

Grey squirrels, however, were introduced to the UK in the late 19th-century from North America.

Initially introduced as an ornamental species, they soon spread throughout the UK and other European nations, such as Italy.

Grey squirrels carry a disease called squirrel parapox virus, which does not appear to affect their health but often kills red squirrels.

Grey squirrels are more likely to eat green acorns, so will decimate the food source before reds get to them.

When red squirrels are put under pressure they will not breed as often which has amplified the initial problem of the grey squirrel.

Another huge factor in their decline is the loss of woodland over the last century, but road traffic and predators are all threats too.

Currently, it is estimated there could be as few as 15,000 red squirrels left in the UK.