Woman, 89, celebrating 70 years of marriage after falling in love at first sight at a dance in the 1940s says the secret to happiness is accepting each other’s differences – but her husband insists it’s ‘doing what he’s told’

A couple who have been happily married for 70 years have shared their words of wisdom.

Childhood sweethearts, Wilfred, 94, and Iris Miles, 89, from Cannock, Staffordshire, celebrated their 70th wedding anniversary on March 10 and received a telegram from the Queen to mark the occasion.

When asked the secret of a long and happy marriage, Wilf, 94, replied: ‘Just do as you are told.’

The couple first met at a dance near Walsall, West Midlands, in the late 1940s and Wilf recalls: ‘I thought she was a smashing looking piece. I asked her to dance and of course she said yes. Thing is, she hasn’t left me alone since.’

The couple now share two children, aged 61 and 57 and six grandchildren and are as in love as ever. 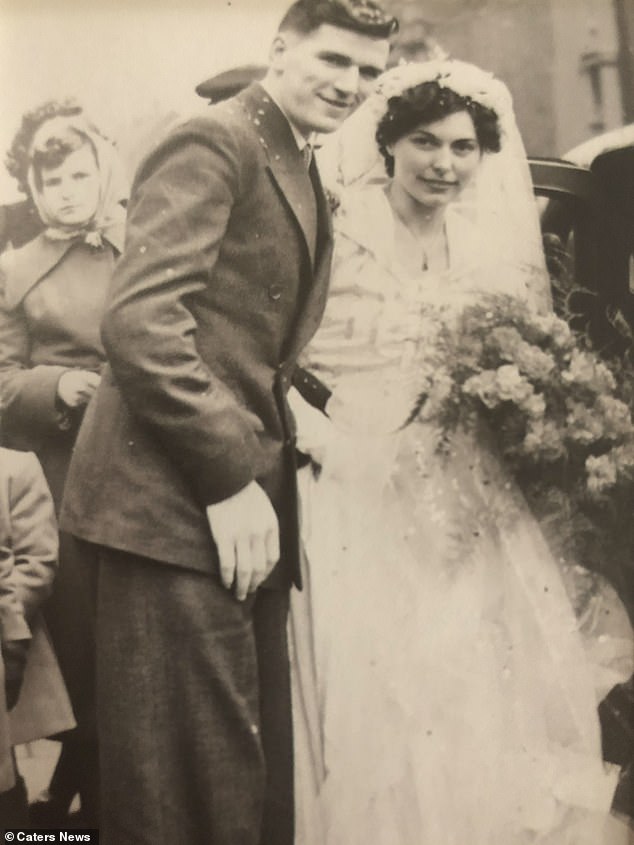 Wilfred, 94 and Iris Miles, 89, from Cannock, Stafforshire, celebrated 70 years of marriage on 10 March after meeting at a dance in the West Midlands in the late 1940s and tying the knoti in 1951 (pictured on their wedding day) 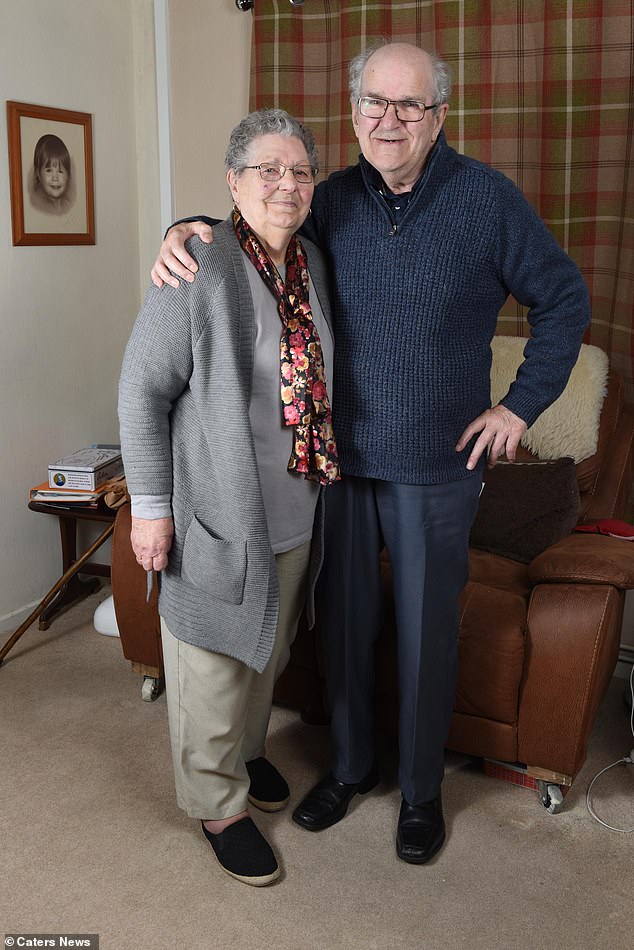 The couple, who now have two children aged 61 and 57, shared six grandchildren and are as in love as ever

Iris, who used to work as a seamstress fondly remembers how she made herself a silk and satin dress before they visited Chester on honeymoon.

Laughing, the couple can’t remember the proposal that led to seven decades of marital bliss but Iris said: ‘He probably just asked me over tea on a Saturday night.’

But Iris can clearly remember when the night she first met her husband and said it was love at first sight. 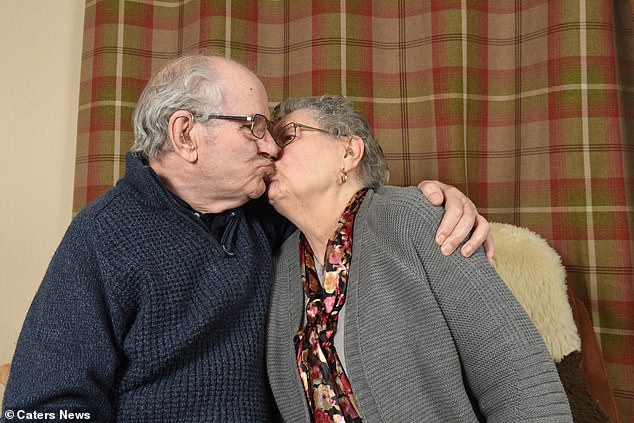 Wilfred, who goes by Wilf, joked he had learned to ‘do as you’re told’ during his 70 years of marriage, while Iris said she loved him even when he was ‘cranky’ (pictured on their wedding anniversary) 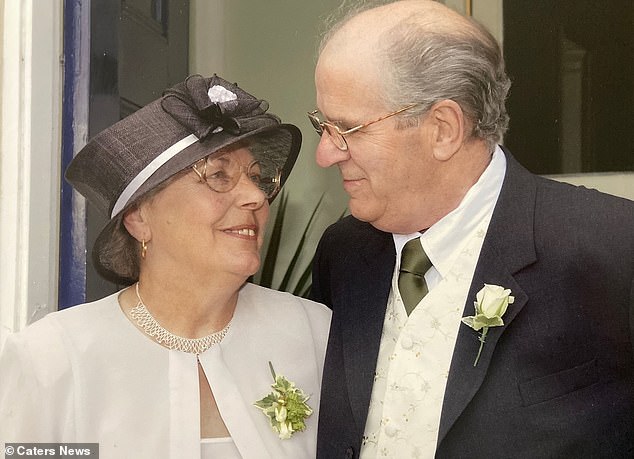 The couple gazing into each other’s eyes at their son Robert’s wedding  in 2015. The pair fell in love at first sight

She said: ‘I thought, “Oh yes he’s the one for me” and I’ve never wanted anyone else. I’ve loved him all these years.’

‘It all started on a Saturday night at a local dance, when big bands used to play, oh it was a gorgeous time.’

More than 70 years later, the couple now have two children, Jane 61 and Robert, 57 and six grandchildren.

As Iris was asked what’s made her put up with her cheeky spouse all these years, Wilf jumped in and said: ‘I’ve got that many good points she would be here all day if she had to list them all.’ 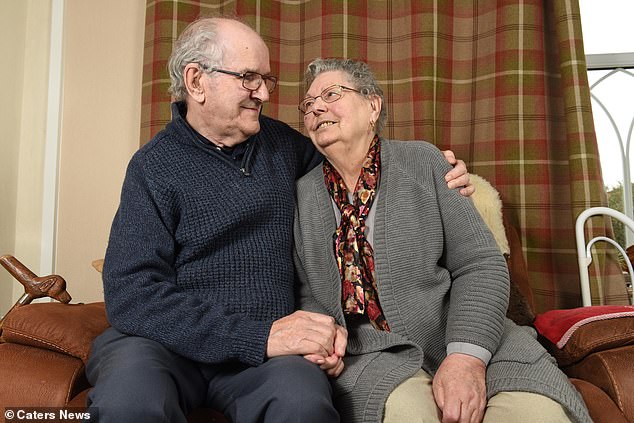 The 94 and 89-year-old love to go out, but due to covid-19, they marked the milestone anniversary at home, pictured 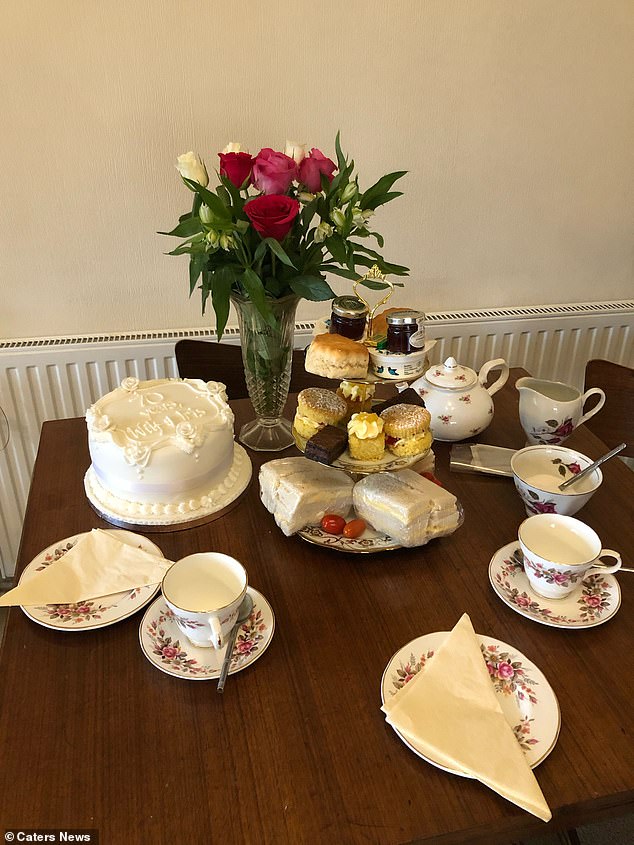 Wilfred loves to eat out, but for their anniversary, the couple treated themselves to an afternoon tea at home, pictured 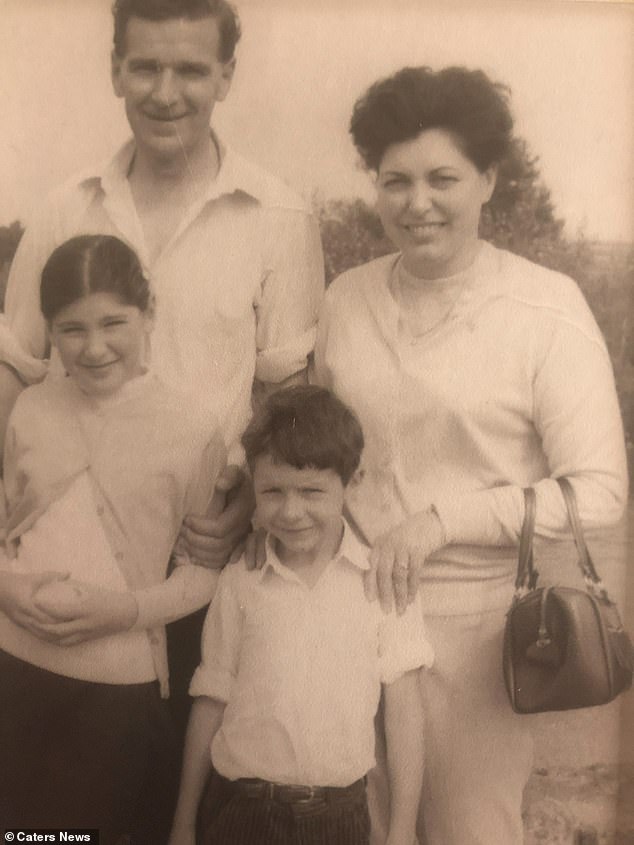 Iris said she fell for Wilfred instantly and said she’s never needed anybody else. Here they are pictured with their children Robert and daughter Jane when they were children

Iris sighed and replied: ‘I still love him, even when he is cranky, I think I would miss his moaning.’

Wilf added: ‘If you have a difference of opinion, you’ve just got to accept that everyone is different and not fall out and never take it to bed with you, that’s the most important piece of advice I can give anyone, never go to sleep on an argument, that’s no good for anyone.’

Iris agreed: ‘You have to give a lot and what you give has to be with love. Have lots of patience with each other, work together and be there for each other.’ 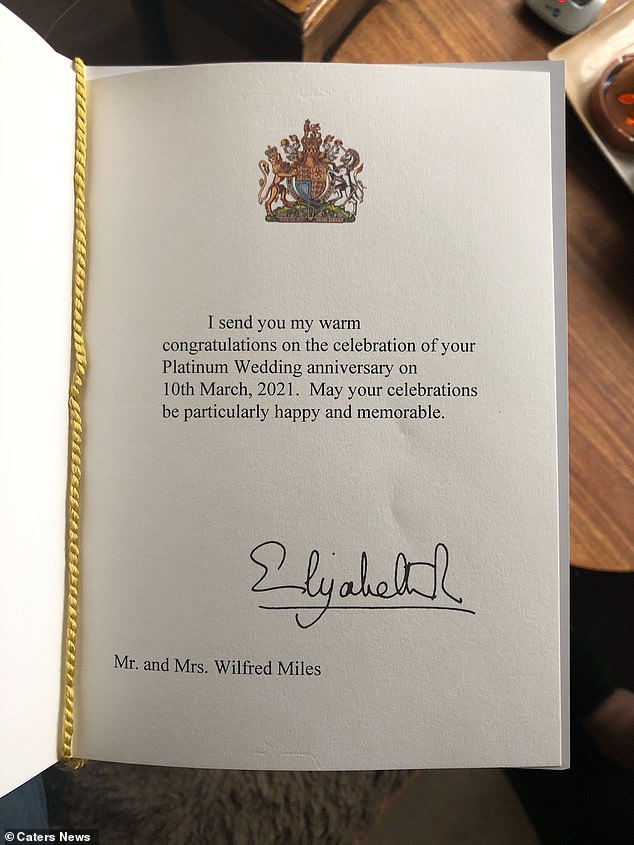 The Queen sent Wilfed and Iris a telegram to mark their milestone, wishing them happy and memorable celebrations 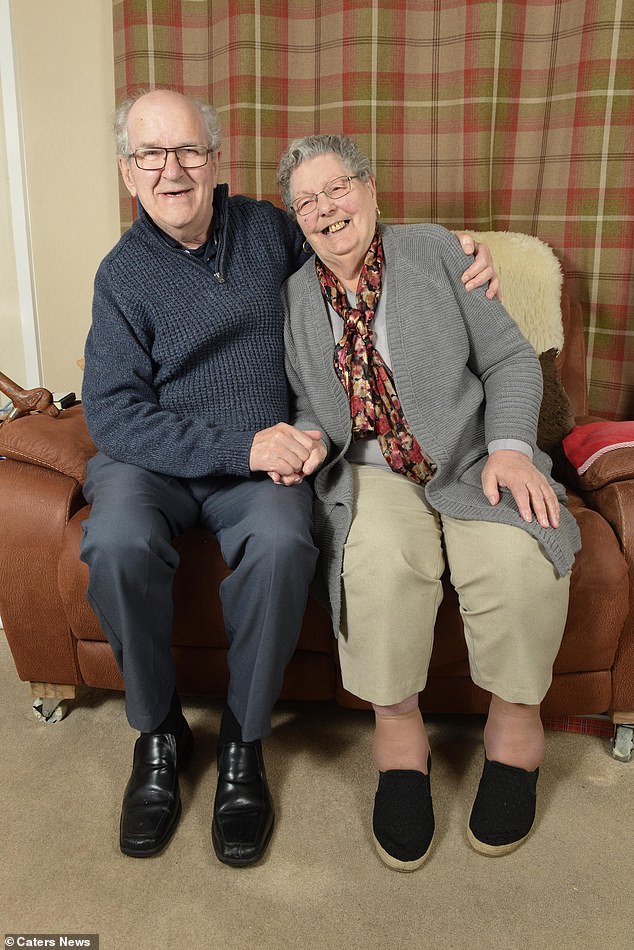 Iris said she’d miss Wifred’s moaning if he weren’t there, and while Wilfred likes to joke he’s ‘had enough’ and is divorcing Iris, the pair, pictured, are as in love as ever 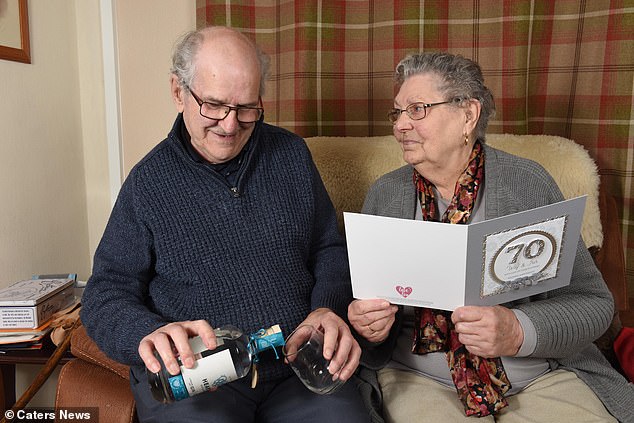 Over the years, the couple have enjoyed holidays and even went to Australia for Wilf’s 65th birthday celebrations.

Iris said: ‘We had ten years together just us, we enjoyed holidays and did as we pleased.

‘Then we bought a business, had the children and just worked really hard.’

During their working life, the couple ran a number of businesses including a green grocers and would often spend every day together at their shops as well as at home.

Before lockdown, the couple would enjoy eating out at local restaurants.

Wilf said: ‘This lockdown has been a bit of a nuisance really, we like to go out, we like to eat out and see our family.’

The couple used to enjoy meals out weekly although Wilfred often complains about the cost.

He said: ‘We do like to eat out, but then you see the bill, anyway, Iris is quite a good cook.’

He said: ‘I don’t do much around the house but we muddle along well together. I’ll do the dishes or make the bed if I have to. I do as I’m told.’ 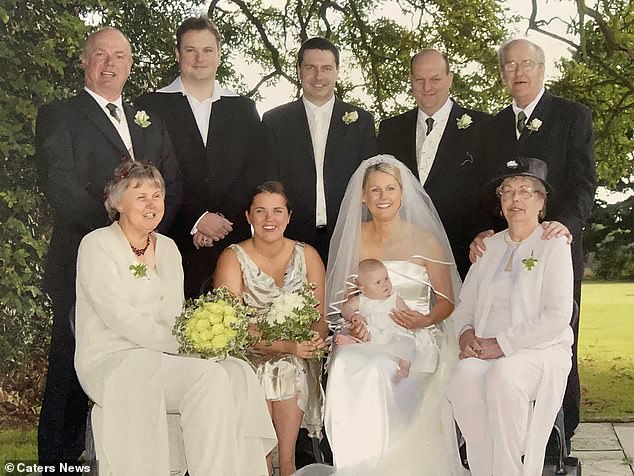 Wilfred and Iris, left, at their son Robert’s wedding. The couple now have six grandchildren and are enjoying retirement tofether 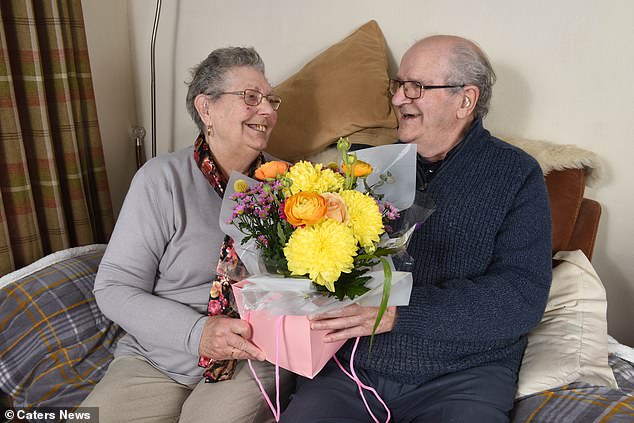 Beautiful blooms for the beautiful couple! Wilfred and Iris showed off the flowers they received on their anniversary

The couple celebrated their milestone anniversary with an afternoon tea and lots of doorstep visits to drop off cards and gifts.

Talking of gifts, Wilf admits he isn’t always the most organised when it comes to special occasions.

Their son Robert said: ‘They are not your typical old age couple, they might be hard of hearing but they are both still sharp.

‘They make each other laugh and what is more remarkable’ – the couple have very often been together day and night as they worked together too for 50 odd years.

‘I think they have probably spent around two weeks apart in all these years so it really is something quite special.

‘They are brilliant but they constantly moan about each other. Dad is always saying “I’ve had enough, I’m divorcing her” but they would be lost without one another.’