Harry Styles showcased his bare chest and tattoos during a sizzling performance of ‘Watermelon Sugar’ at the 2021 Grammys!

Harry Styles opened the 2021 Grammy Awards with a sizzling performance of his hit “Watermelon Sugar” that caught our attention — along with Billie Eilish! The singer, who will take the stage right after Harry, was caught bopping to the hit in the COVID-safe crowd. Harry hit the stage in a full leather look, which included a collared jacket and matching slacks. The 27-year-old singer and actor went shirtless under the designer ensemble and showed off his signature butterfly chest tattoo, among more stomach ink. 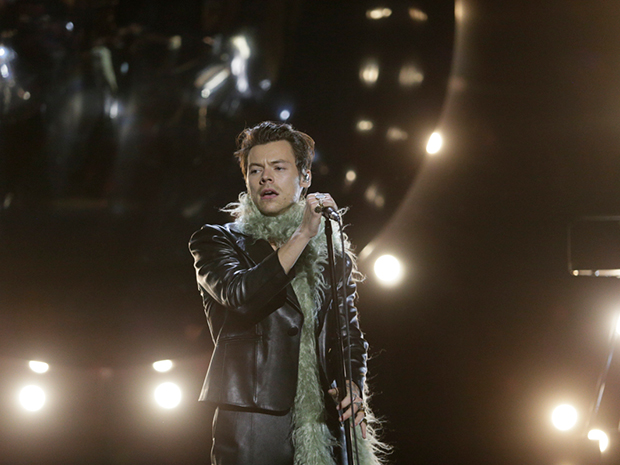 Harry, who didn’t walk the socially-distanced red carpet outside Staples Center in downtown Los Angeles, appeared to be at the annual show without girlfriend Olivia Wilde, who’s out of town working on a movie. The former One Direction singer, who a source told HollywoodLife is hoping to keep his relationship private, has yet to publicly address the fairly new romance.

Harry and Olivia were first photographed holding hands together on January 3, while attending his agent’s wedding at the ritzy San Ysidro Ranch in Montecito, CA. The next day, the two were photographed arriving at his LA home with luggage in tow. Additionally, Harry and Olivia are working together on the upcoming film Don’t Worry, Darling — in which Harry is starring and Olivia is directing. Therefore, they’ve been spending a lot of time together. 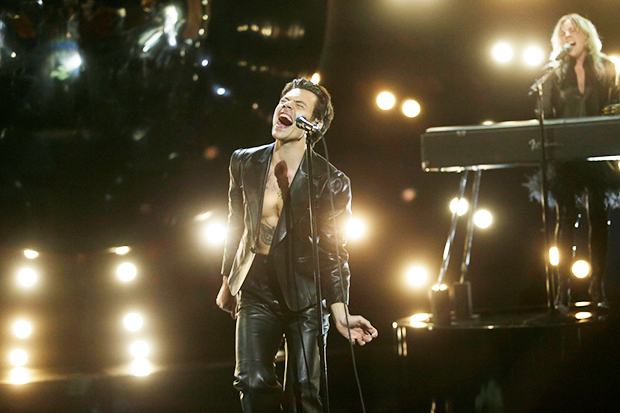 The pair went public with their relationship just two months after Olivia split from her fiancé of seven years, Jason Sudeikis, with whom she shares son Otis, 6, and daughter Daisy, 4. The exes, whose split went public in November 2020, are thought to have actually broken up sometime in early 2020. Though, it’s unclear when exactly they ended their relationship.