Toymaker Hasbro says it is removing a Trolls doll from store shelves after people complained that a button on the doll is inappropriately placed under its skirt. The decision comes after an online petition was created urging stores to remove the “Trolls World Tour Giggle and Sing Poppy” doll.

The petition has massed nearly 300,000 signatures. “When you push this button on the doll’s private she gasps and giggles. This is not okay for a child’s toy! This toy needs to be removed from our stores,” reads the petition, which is addressed to Target, Walmart, Amazon, Dollar General and Family Dollar stores.

A video of a mom demonstrating the doll’s button, which when pressed activates the doll’s voice, has gone viral on several social media platforms.

In a statement to CBS News, Julie Duffy, senior vice president of global communications at Hasbro, said: “This feature was designed to react when the doll was seated, but we recognize the placement of the sensor may be perceived as inappropriate.” 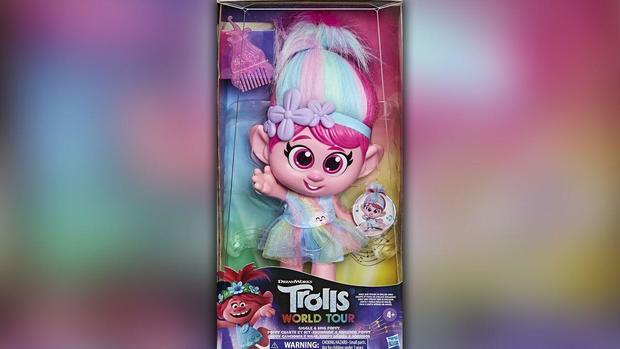 “This was not intentional and we are happy to provide consumers with a replacement Poppy doll of similar value through our Consumer Care team. We are in the process of removing the item for purchase,” Duffy’s statement continued.

Trolls dolls were first created in 1959 and have seen many iterations and levels of fame over the years. They are extremely popular today.

Poppy, voiced by Anna Kendrick, is one of the main characters in the latest Trolls film. “Trolls World Tour” premiered for on-demand video streaming in April when most of the world was in quarantine, and Universal announced that it had the biggest opening day and weekend for a digital title, according to Variety.