It was not so long ago Mr Raab was staking his claim to be the occupant of this Georgian property.

There was an irked, irritable air as he took to the lectern. Ah, what might have been… 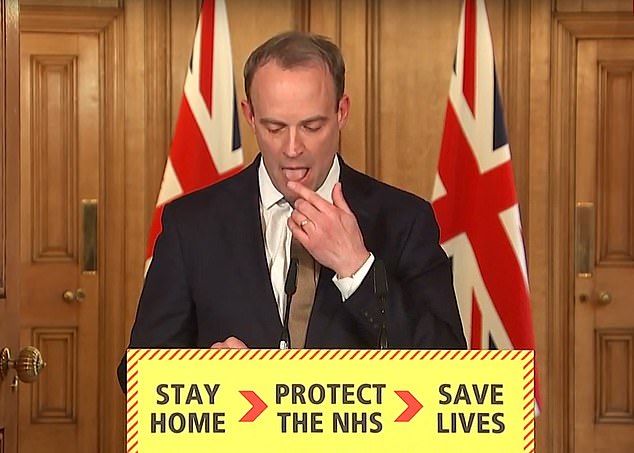 Unsettling chap, the Foreign Secretary. There is something mildly menacing about him, is there not?

While clearly a driven and competent enough fellow, the milk of human kindness does not exactly seep from his pores.

As bedside manners go, his demeanour is possibly more suited to the morgue than the sanatorium.

Interestingly, I think he realises this. He speaks an octave higher than is his natural tone. His hand gestures are rather affected, as if to convey a sort of faux friendliness.

On the rare occasion that he smiles, it is a forced, almost painful gesture, as though two Lilliputian creatures have embedded themselves in his cheeks and are yanking him by the jowls. 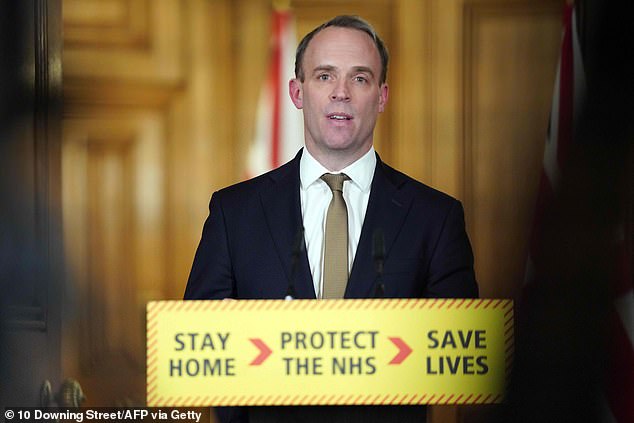 More from Henry Deedes for the Daily Mail…

The main issue Raab wished to address amid the current crisis was his plans to bring home all the British nationals stranded abroad.

Incidentally, Raab’s colleague Caroline Nokes (Romsey and Southampton N) raised what she regarded as the Foreign Office’s deficiencies on this issue with him in the Commons last week. Dear me, she gave him a right old roasting.

The Foreign Secretary acknowledged it was ‘a worrying time for all affected’, but was quick to point out yesterday that we weren’t talking a handful here.

These were literally hundreds of thousands, from young backpackers to the elderly on cruises.

He reeled off all sorts of statistics detailing the size of the repatriation which has already taken place.

It was a bit more complicated than rescuing a few stragglers on a booze cruise to Calais.

Raab described the operation as ‘unprecedented.’ We hear that word rather a lot now don’t we?

To illustrate his point, he revealed the Foreign Office typically receives about 1,000 calls a day. Last Tuesday, it received as many as a 15,000.

So now he was pledging £75million to help bring the stranded home.

Reassuring as this doubtless sounded on paper, his delivery was all off, his voice accentuating all the wrong syllables.

There were some odd, uncomfortable pauses between sentences, the result of media training, perhaps, which had not entirely justified its fee.

Joining Raab was Sir Patrick Vallance, the Government’s chief scientific adviser who had thoughtfully prepared a little slide show to demonstrate how dramatically numbers on public transport had fallen since last Monday’s lockdown. 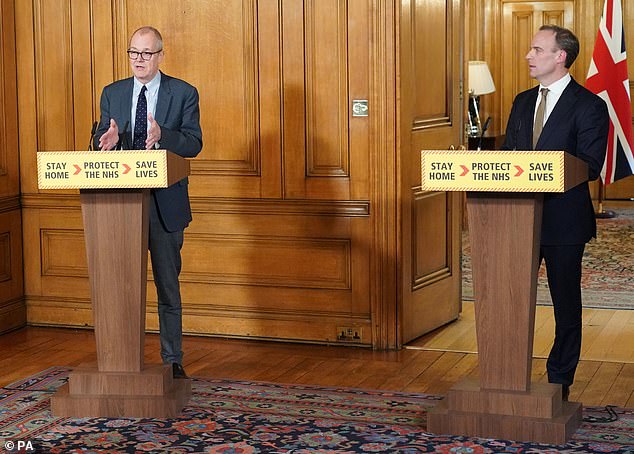 ‘The measures are making a difference,’ he insisted. Those watching on television just had to take Sir Patrick’s word for it, for despite his repeated call for the ‘next slide please’ whichever broadcaster was in charge of the pool camera refused to put them in shot.

Questions, as is now the practice, followed via videolink, almost always the most entertaining part of these briefings since none of my colleagues in the lobby seems to have quite mastered the technology.

Last week, ITV’s Robert Peston turned the airwaves blue before the watershed when he couldn’t get his microphone to work.

Yesterday, however, was free of mishaps, and someone enquired about how many people will be tested for coronavirus.

Here we heard from the Medical Director for Public Health England, Professor Yvonne Doyle, whom I’m not sure has cropped up on our radar before. I notice she used to advise Boris when he was Mayor of London.

The doctor said a new antibody test was currently ‘under investigation’ though reiterated advice that ‘there is one thing worse than no test and that is a bad test.’

With both the PM and Health Secretary Matt Hancock struck down with the virus, someone else asked Raab how he was faring.

‘I’m feeling terrific thank you very much,’ he replied, displaying all the enthusiasm of a man who’d just accidentally tossed away a winning pools coupon.

And with that, he decided that was enough. ‘Thank you all very much,’ he announced abruptly before turning on his heels. Like I said, an unsettling chap