I feared a mud pie would splat on Liz Truss’ white jacket at any moment: HENRY DEEDES watches Tory leadership hopeful on the campaign trail

Brave move from Liz Truss. Usually candidates in a Tory leadership race like to pull on a hi-vis jacket and chose a location with a bit of pizzazz to launch their campaign.

A science laboratory where miracle cures are made, perhaps, or a bakery with a nice line in Conservative blue sticky buns.

Boris Johnson, for instance, loved to go zooming around a factory floor in a fork lift truck, smashing things up as he went.

One time I witnessed the PM crunching though the gears of some heavyweight piece of machinery so recklessly I thought the engine might erupt. You should have seen the foreman’s face. Poor man was practically having kittens.

The Foreign Secretary, though, chose somewhere altogether more low-key yesterday to kick off her battle with Rishi Sunak.

She paid a visit to Little Miracles, a charity in Peterborough which helps families that have children with disabilities or special needs. 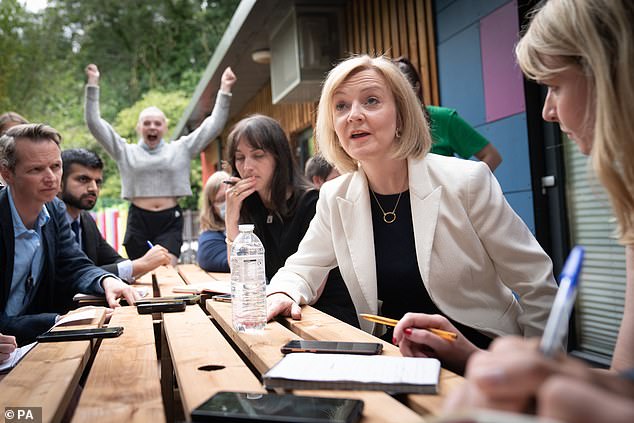 Brave Liz Truss paid a visit to Little Miracles, a charity in Peterborough which helps families that have children with disabilities or special needs 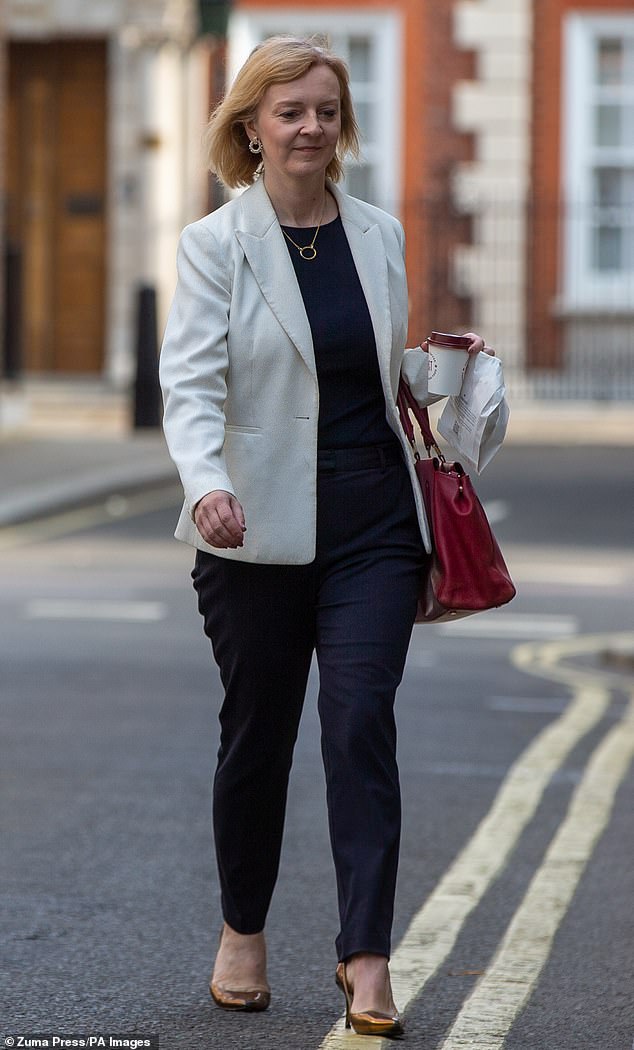 She arrived shortly before 3.30pm wearing flashy gold heels and a blazer which was whiter than a swan’s breast

At the risk of sounding indelicate, this was one of those trips which had the makings of a disaster. The Trussette is not exactly blessed in the gentle art of spontaneous conversation. She can be awkward, clunky. A tad on the robotic side. And we all know children. They can be as unpredictable as a firework with a badly-lit wick. You never quite know what they will say next.

Turned out Liz was a total natural. Why wouldn’t she be? She’s a mother of two, of course, though it’s something she rarely mentions. And in the everyday cut and thrust of the Commons, we rarely witness her tender side. Voters need to see it more.

She arrived shortly before 3.30pm wearing flashy gold heels and a blazer which was whiter than a swan’s breast.

Such an outfit was another bold choice as, outside, the children were jumping in and out of bushes. At any moment I half expected to see a giant mud pie fly through the air and go splat on one of her lapels.

The jacket was certainly making the charity’s chief executive, Michelle, nervous. Especially whenever Truss hovered next to what appeared to be a large bowl of green goo.

‘I think we better move away from the painting area,’ she said, ushering her guest gingerly towards a table. 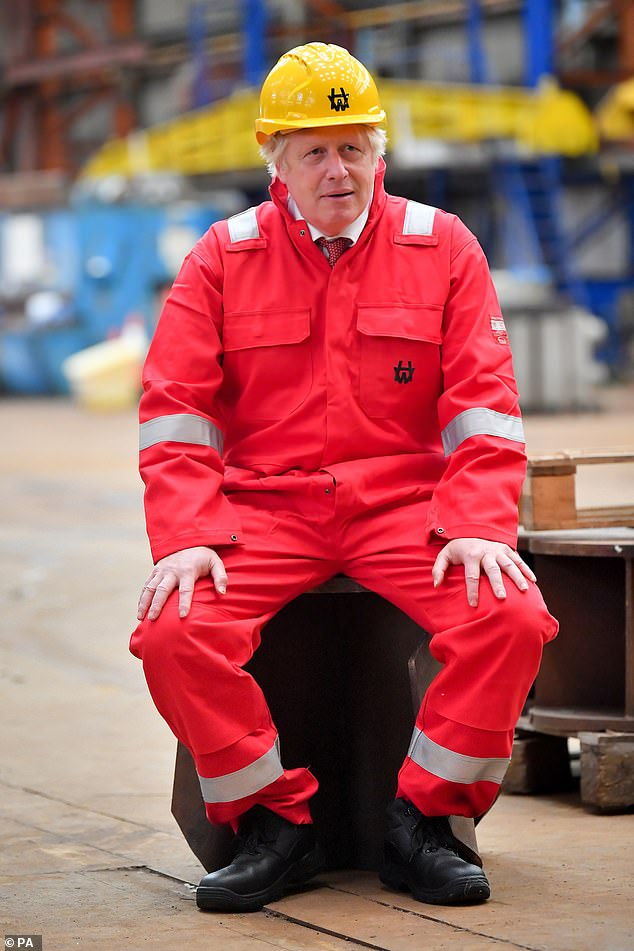 Boris Johnson (pictured during his visit to Appledore Shipyard in Devon on 25 Aug 2020) loved to go zooming around a factory floor in a fork lift truck, smashing things up as he went 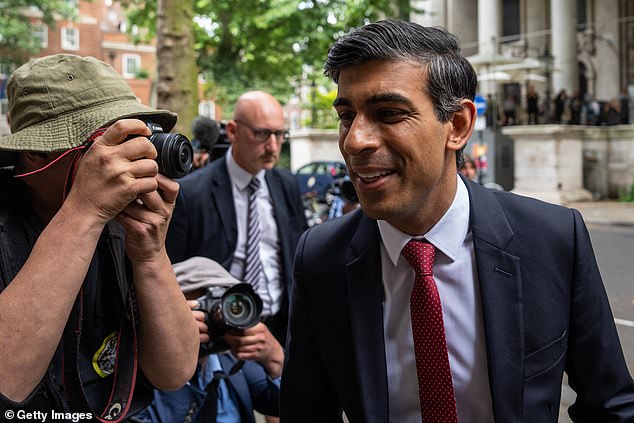 Waiting for her there were half a dozen or so children. Truss was introduced to two particularly chatty boys, Harry and Larry. Harry felt Larry should be Prime Minister. Larry, who sported the most luxuriant bouffant, did not demur.

One girl didn’t care for all the camera flashes going off around her. ‘They’re very annoying,’ she sighed. Liz agreed.

‘They’re these rather scary journalists, I have to put up with it,’ she said. ‘That’s the problem with being a politician. We can’t fire the press.’

Her new friends seemed disappointed. What’s the point of being in charge of the country if you can’t sack all the people you don’t like?

‘Where’s Boris Johnson?’ enquired one girl. Truss informed her he was back in Downing Street still beavering away at his desk. The young interrogator wrinkled her nose crossly and barked: ‘When you’re Prime Minister can you evict him?’ This seemed more an order than a request. 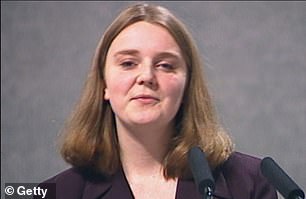 Truss assured her Boris would be leaving No 10 entirely voluntarily. Well, that’s the plan anyway.

Later, she endured some more serious questioning from the Press. Mildly more serious anyway. Someone asked Truss who her inspirations in life were. Awkward pause.

One scribe teasingly suggested Philip Hammond’s name. ‘Er, he’s not on my shortlist,’ she tittered. Background: Truss was Chief Secretary to the Treasury when Lord Doomandgloom was Chancellor. Relations between the pair were not what you might call fragrant.

There was some light ribbing over footage Newsnight recently unearthed of Truss pledging to abolish the monarchy. When did she change her mind about that? ‘Almost immediately after I made that speech!’ she replied.

She acknowledged she still lacked Mr Sunak’s presentational skills. ‘I’m not the slickest out there. But I get stuff done,’ she said. A good line. Maybe one for the campaign leaflets.