The creators of the musical Six, Toby Marlow and Lucy Moss, knew the rhyme chanted in classrooms around the world to remember the grisly fates of the wives of King Henry VIII: “divorced, beheaded and died, divorced, beheaded, survived”. But that was about the extent of their knowledge of Tudor history. Then, in their final year at Cambridge University, where Marlow studied English and Moss history, the two theatre fans decided to write a musical comedy. 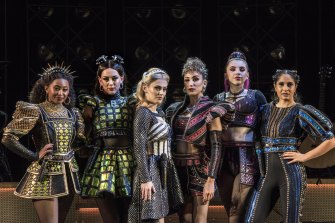 “Neither of us were big Tudor buffs, that’s not really where the idea came from,” Marlow says. “It was wanting to write something that had a famous group of women at the forefront. We had so many incredibly talented friends at uni who were women and non-binary performers, who would get to sing ballads about loving a man or not being loved by a man. And then we thought, wouldn’t it be fun to write a show with a bunch of pop bangers that would allow a female cast to be hilarious and charismatic and have as much pizzazz and charisma as the boys’ songs usually have in musicals.” 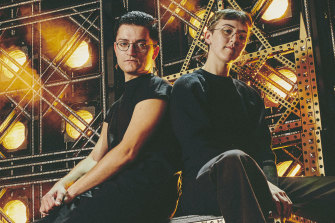 Over the course of 10 non-consecutive days in 2017 they wrote their musical comedy featuring Catherine of Aragon, Anne Boleyn, Jane Seymour, Anna of Cleves, Katherine Howard and Catherine Parr as pop princesses with an all-girl back-up band. By that summer it had been selected for the Edinburgh Fringe Festival, and now five years on it has become an international hit with rave reviews in London, New York, Chicago and Sydney.

Earlier this month it received eight nominations for the Tony Awards, Broadway’s top gongs, including best new musical, best original score and best direction of a musical. It opens in Melbourne on June 17.

Moss, 28, is now directing Legally Blonde in London and Marlow, 27, has just returned to London from the US, where he has been writing pop songs in Los Angeles (stopping in New York for a day for the Tony announcements). Marlow, a former child star (he once featured in BBC’s Miss Marple) who grew up in a musical theatre-loving family, adored Cats as a child and Wicked as he got older. At Cambridge he wrote a paper comparing Hamilton the musical to Shakespeare. Despite his love of the genre, the show’s success has been as much of a surprise to him and Moss as anyone else.

“It’s been crazy. It wasn’t like we woke up and decided: ‘I want to be a successful musical theatre writer’,” Marlow says. “It was more like: ‘I want to be a singer-songwriter like Ed Sheeran’ … then I started writing songs for comedy shows and pantomimes and it was fun and I think that gave me the confidence to apply myself.”

The idea came to him while daydreaming in a poetry class, but he knew he needed his mate Moss to help write and choreograph. Their high-octane show is sung in a rollicking reality TV show style, where the queens get to compare their suffering at the hands of Henry VIII. The dialogue is whip-smart, the songs ear-wormy, largely inspired, Marlow says, by queens of pop such as Beyonce, Sia, Adele, Ariana Grande and Britney Spears.

Not just “big divas”, as he calls them, but Australian writer/performer Tim Minchin too.

“Tim Minchin has been an inspiration in the hugest way because Lucy and I just think he is the best, cleverest, most incredible writer. The way that he uses song form to do jokes that are funny but also catchy and interesting, it’s unparalleled. He’s such an influence on us. When he came to see the show in Sydney I was so upset because I couldn’t be there – but at least Lucy was.”

Minchin saw the show in Sydney on opening night in 2020, and was pictured on the trademark purple throne that sits in the foyer each show. The throne attracts throngs of fans, known as the “Queendom”, whose selfies have helped create the social media buzz about the show, going viral on Instagram and TikTok.

Three of the current Australian cast are graduates of the Victorian College of the Arts: Phoenix Jackson Mendoza plays first wife Catherine of Aragon; Kala Gare plays Anne Boleyn, arguably the best-known wife, whose beheading for treason sparked the start of the English Reformation, where the Brits broke away from the Roman Catholic Church; and Kiana Daniele plays the German-born Anna of Cleves.Vidya Makan, who plays Catherine Parr, the final surviving wife, is also from Melbourne.

Glen Waverley-born Loren Hunter, who plays Jane Seymour, who died in childbirth, and Chelsea Dawson, who plays Katherine Howard, beheaded for being unfaithful, are both Queensland-based and trained. All say they are astounded by the audience reaction to the feminist retelling of British history. 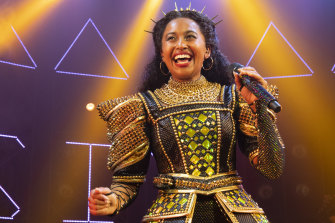 “It is an exhilarating and uplifting show where the audience may be touched by our sad stories but they always leave on a high,” Jackson Mendoza says.

“It’s like having a Red Bull,” Gare jokes, “but it is also a beautiful shared experience that brings such joy to a varied audience. It’s a credit to the writers that it is so appealing to all ages.” 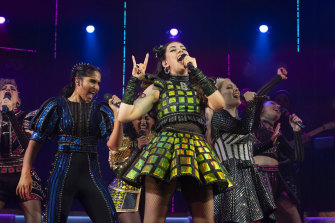 “We like to think of ourselves as ‘linked not ranked’, which is a Gloria Steinem quote,” Hunter says. “That is the spine of our story because for the most part of history we have been compared to each other. But the message of the show is: ‘stop comparing us, and you can all stop comparing yourselves’. That’s the most important takeaway,” Hunter says (her character, Jane Seymour, is said to be the only wife the king truly loved).

“The audience is like the seventh queen; they are really very much a part of the show and I feel like the reaction from them is electric,” she says.

The bold costumes are like colourful suits of armour (they certainly weigh as much, say the performers, who joke it is like a military operation getting them on and performing in them for 75 minutes). Their colours are also symbolic: Anne Boleyn’s skirt and top are green in reference to Greensleeves, the poem written by Henry VIII about her.

Makan believes another reason for the show’s popularity is its use of iPhones on stage, and diverse casting. “I am of Indian heritage, and growing up I never saw a place for myself in musical theatre, but I do now and many young women of all different ethnicities in our audience do too,” she says.

Marlow is in the middle of writing another musical as well as pop songs. He laughs now about the doors that have opened since the musical’s success. A composer who plays the piano, guitar and violin, he was expecting to apply to some composition residencies when he graduated from Cambridge. He was offered a job at an Apple store in his final year and applied for a teaching position, which he didn’t get.

No matter. He and Moss have created a history lesson that we can sing along to; better than any curriculum anywhere in the world.

Six opens at the Comedy Theatre on June 17.

A cultural guide to going out and loving your city. Sign up to our Culture Fix newsletter here.