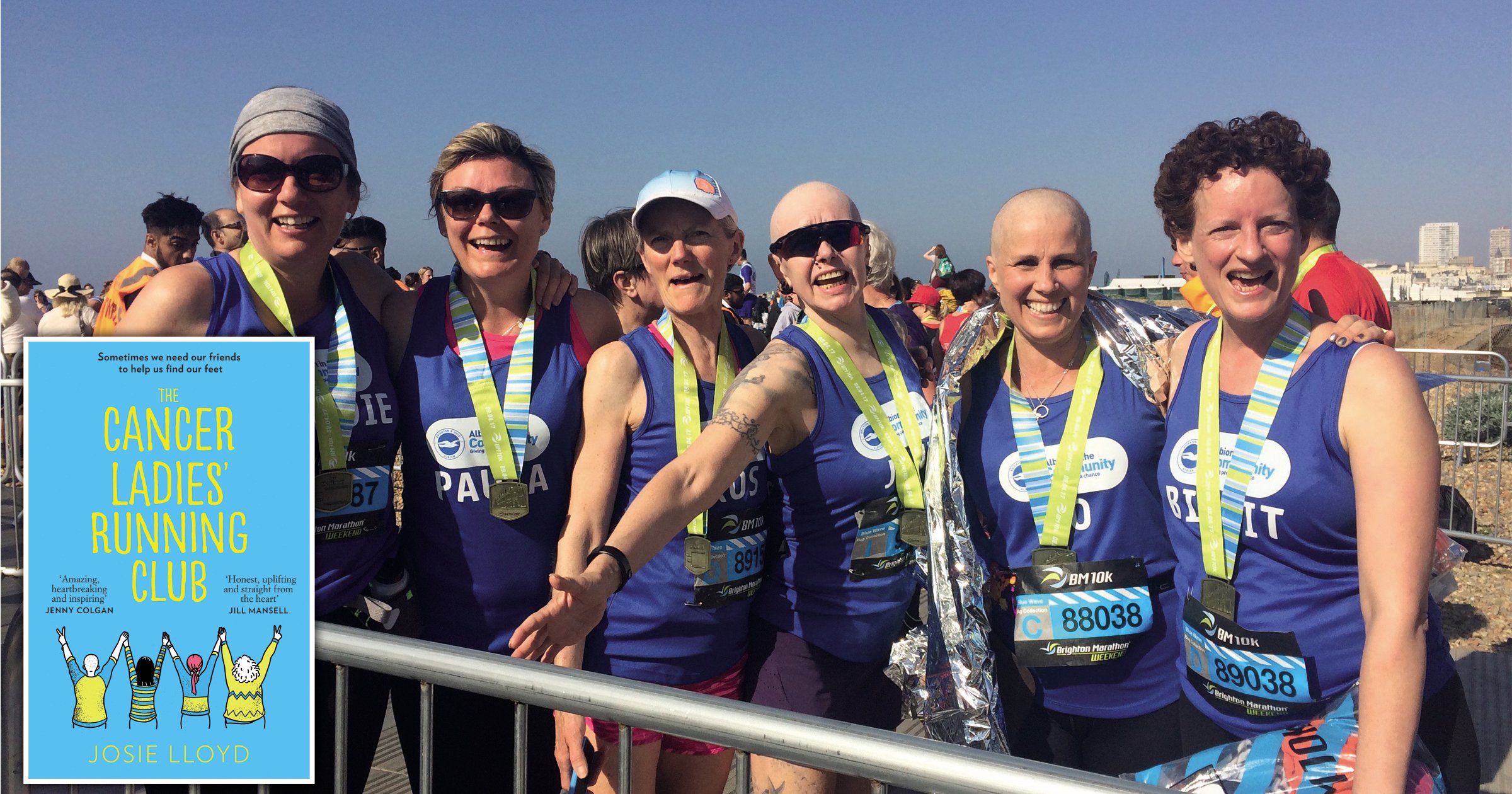 When Josie Lloyd was struggling through debilitating breast cancer treatment, the last thing she wanted to do was reach for her running shoes.

‘You don’t even expect cancer and running to be in the same breath,’ says the author and mother of three. ‘Chemotherapy makes you breathless. I wasn’t fit anyway and I’d certainly never been a runner.’

But an invite to a local running group for women facing cancer changed Josie’s life and sparked an extraordinary new novel, The Cancer Ladies’ Running Club. Although fiction, it’s based on the friends she made as they met for regular jogs around Brighton.

‘It was actually “chogging”, which was our mix of chat and jogging,’ she says. ‘We ran all the way through my treatment and because the others were going through or had been through the same thing, they knew how I was feeling. They knew not to call the day after chemo but a week later.

‘The physical act of putting trainers on and being out in the sunshine felt like we were putting two fingers up to cancer. We shared the same gallows humour. We joked about body hair floating up in the bath or me being literally “off my t**s” when I went in for surgery.

‘We call each other the “Runtastics” on our WhatsApp group, and when the first lockdown lifted they were straight over for tea, which quickly turned into bottles of Prosecco.’

Josie was 47, married to fellow author Emlyn Rees and the mother of three daughters when a cancer diagnosis came in January 2017. Lloyd attended a mammogram as part of a trial — and didn’t worry when she was called back for an ultrasound.

‘I drank a bit too much and my New Year’s resolution was to get a bit fitter,’ she says. ‘When the radiologist said it looked like cancer, I burst into tears. I’m a dramatic writer with an overactive imagination so that night I lay in bed weeping, convinced I was going to die.

‘Telling Tallulah, then aged 17, Roxie, 14, and Minty, ten, that I had cancer was the hardest thing.’

Josie was diagnosed with grade 2 lobular breast cancer. Her treatment involved a mastectomy at the end of that month, followed by a month of chemotherapy and 20 sessions of radiotherapy.

‘It was fairly brutal, and you’re exhausted,’ she says. ‘Worse, you feel like your whole identity has been stripped and you’re no longer Josie the laugh, the wife, the working mum, but “cancer victim”.’

Salvation came in the unexpected form of that running group.

‘Ros, a fitness instructor and mum at school, invited me to join a running club for women who had been affected by cancer and were in different stages of treatment. Ros explained the importance of keeping fit during treatment.

‘The Running Through Cancer group was a charity initiative of Brighton and Hove Albion Football Club but when I joined the eight other women for my first jog, I just wanted to crawl under my duvet.’

‘They were all laughing about how unfit they felt yet it was empowering,’ she says. ‘I’d been on a chemotherapy conveyor belt but this allowed me to pull on my running shoes on and say, “I’m not defeated!” I felt I was running away from cancer.’

When Josie’s hair started to fall out, her fellow runners lent her wigs. In April, they all completed the Brighton 10K run.

‘I was bald, puffy and I just wanted to cry,’ recalls Lloyd, ‘but crossing the finish line was incredible.’

‘But with one in eight of women getting breast cancer, it’s a subject that needs some debunking,’ she says. ‘I dedicated the book to my running pals. They showed me that it’s possible to not just survive but to thrive.’

■ The Cancer Ladies’ Running Club, published by HQ, is out now

How to get your Metro newspaper fix

Metro newspaper is still available for you to pick up every weekday morning or you can download our app for all your favourite news, features, puzzles… and the exclusive evening edition!