How children are 'tricked and shipped' to their parents' native Africa

A man and a woman have spoken about how their parents duped them into moving from the UK to Africa as children in a phenomenon known as being ‘tricked and shipped’.

The approach is used by African parents living overseas who want to send their children back to their native country, but use false pretenses to get them on the plane, explained BBC World Service journalist Kim Chakanetsa in podcast The Comb.

There are no official records on how many children have been ‘tricked and shipped but Kim said she had come across ‘dozens and dozens’ of stories online.

The reasons for the relocation vary. One woman named Hannah told how her parents sent her to Nigeria when she was 11 years old because they believed she needed more ‘discipline’ and wanted to ‘protect the family name’ after she was suspended from school.

She boarded the plane believing she was going to stay with family in the US, only to discover moments before takeoff that she was destined for Lagos. She spent the next five years in Nigeria as a student at a strict boarding school where punishments included being flogged in front of her classmates until she bled.

However the podcast also heard from a man named Arif who was sent to his father’s native Uganda at the age of nine. His parents wanted him to learn more about his cultural and religious heritage, something so important that the family felt could not be gained from their life in the UK. 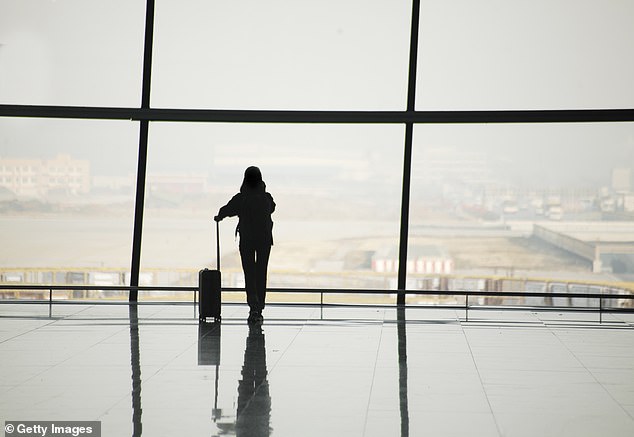 A man and a woman have spoken about how their parents duped them into moving from the UK to Africa as children in a phenomenon known as being ‘tricked and shipped’. Stock image

‘I ONLY FOUND OUT WHEN I GOT ON THE PLANE’

As a Year 7 student in London, Hannah described herself as ‘mischievous, stubborn, but smart’ and regularly found herself in trouble with teachers.

‘I used to be very hotheaded,’ she explained. ‘I used to never tolerate anything. Patience was not in my vocabulary at all.’ Bad behaviour including fighting or being disobedient regularly led to suspensions and her parents being called to school.

She was suspended 13 times in the first term of Year 7 alone.

Her parents warned her that they would send her to Nigeria, a country she had never visited, if she continued to misbehave but she simply told them she ‘wouldn’t go’.

When Hannah was 11 years old, her parents told her she was going to stay with her cousins who lived in the US. It was a childhood dream for Hannah, who had visions of exploring New York and visiting the stars on the Hollywood Walk of Fame.

It was only once she was on the plane that she found out where she was really going.

‘My Dad was sitting by the window, I was sitting right next to him,’ she recalled. ‘They were doing the safety checks and everything.

Two weeks later, Hannah had started at a boarding school. ‘It was a hard knock life,’ she said. She recalled the first time she was flogged in front of the class: her Year 8 Maths teacher had called her out when she didn’t stand up when he walked into the room. ‘The first stroke, I started crying my eyes out. My hand started shaking.’

On another occasion she was beaten in front of the whole school alongside a group of friends.

She continued: ‘Teachers would take it in turns and the students were just looking at us. And they said they were going to flog me in the style of the Union flag because I was from the UK. I remember I was bleeding on my back.’

However she acknowledged there were some benefits to the experience, revealing how it completely changed her attitude towards learning.

‘In the UK, if you were the dumbest kid, you were deemed the cool kid, the class clown,’ she explained.

‘If you were smart in the UK, you had to keep it on the low because people would make fun of you. [In Nigeria] I was surrounded by people who wanted to make sure their education was A1. It got to the point where I was striving to be the best in the class.’

She added: ‘I do appreciate it to an extent, because I might have turned out very, very bad here. But I still believe there could be another way around it, other than sending me to Nigeria.’

‘THEY LEFT US AT THE SCHOOL AND DIDN’T LOOK BACK’

Arif, now 24, was nine years old when he was unknowingly enrolled at a Ugandan boarding school with his brother.

The family had travelled to Uganda, his parents’ home country, for their annual winter break. One day the boys were brought to a local school for a visit.

‘My mum said, “oh yeah, we’re going to visit some schools”. I think she said we had some cousins there or something that we hadn’t met,’ Arif recalled. The boys wandered off to explore, while his mother left to go speak to someone.

‘We were on a veranda by the headteacher’s office and the cars were parked in the middle of the school so you could see the cars pulling off. So as we were standing and wandering around the classrooms, we see their car’s pulling off without us.

‘My mum got in and didn’t even look back as if she had forgotten us. So she’s just walked off, not even turned around, not even once. My brother and I, we just started crying, we were so confused… The tears we cried that day were immense.’

The podcast also heard from Arif’s father, who has lived in the UK for 30 years. He explained he and his wife had always planned to send their sons back to Uganda at some point in their lives in order for them to properly understand their culture and language.

He was also eager for the boys to receive a proper education in Islam, which he felt was not available near to where they lived in the UK.

Speaking on why they decided to leave the boys that way, he said they were too young to properly understand the concept of leaving to attend boarding school anyway.

‘It wouldn’t have made much of a difference,’ he said. ‘All that we did was tell them that in a year they would be back to London… Eventually I spoke to the staff at the school and they had settle in.’

For Arif and his brother, it was a steep learning curve. The boys had to collect their own water for cold water showers; had to learn a strict new set of rules, and found themselves being beaten when they stepped out of line.

However there were major positives. Arif learned his parents’ mother tongue and was given an understanding in religious principles that he carries with him today.

For his father it was also a success. He told how the boys returned from Uganda more humble and better behaved.

He said the key was to frame the experience as a positive, for their own betterment, rather than as a punishment for bad behaviour.