How John Howard stepped in to protect Don Bradman’s name

In the eyes of John Howard, Donald Bradman was "the greatest living Australian", not a batsman to be associated with an Adelaide sex shop or a cafe filled with cricket memorabilia.

Cabinet papers from 2000 reveal Mr Howard – then Prime Minister – gave a presentation to senior ministers on September 12, telling them he had spoken to the Bradman family about potentially protecting the name against inappropriate commercial use. 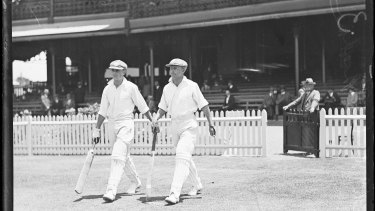 It was prompted by a move in Adelaide to rename a section of Burbridge Road as Sir Donald Bradman Drive on January 1 the following year.

Adult shop Ultimate Risk wanted to change its name to Erotica on Bradman while a cafe which registered the business name "Bradman's Cafe Restaurant" had plans to feature cricket paraphernalia to woo customers.

According to documents released today by the National Archives of Australia, Mr Howard urged his cabinet to amend the Corporations Act, to be drafted by assistant treasurer Rod Kemp, which would confirm Bradman's unique status among Australians and elevate the protection of his name to a statutory level. 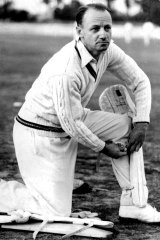 Don Bradman pictured at training in Adelaide in 1948.Credit:Archive

Mr Howard had a few months earlier delivered the inaugural Bradman oration in Melbourne, where he described the then 92-year-old as "a man representing many of the values, much of the character of his countrymen".

"Even now, in another century, in a world scarcely recognisable to that in which he played, the name Bradman resonates with meaning – talent, determination, commitment, fair play, honour," Mr Howard said.

"What then does this say about Bradman and what does it say about Australians that Bradman was so elevated to the honoured status that he now occupies in the national psyche?"

By October 11 the legislation had passed Parliament adding Sir Donald's name to a select group whose names may not be used to register a company name if a connection, which does not exist, with one of these people or organisations, is suggested.

Members of the very special club include all members of the royal family, persons in receipt of royal patronage and ex-serviceman's organisations. In adding Sir Donald's name to this hallowed list his status as an icon in the development of a unique Australian identity along with the Queen and the "Aussie Digger" was assured.

After negotiations with the Bradman Foundation the cafe owners dropped plans for the cricketing theme and agreed to identify themselves, by location, as "Bradman Drive Cafe Restaurant" rather than attempt to link the cafe with Sir Donald himself.

But years later the family was still fighting to protect the name when Bradman's son, John, and two other executors of the late Australia Test captain's estate sued the firm, Allens Arthur Robinson, alleging it was negligent in assigning the cricketer's name.

The Bradman family's displeasure became public in 2005 when a food company was licensed to market "Bradman" chocolate chip cookies in India. At the time the family described Bradman as "a loved and missed family member, not a brand name like Mickey Mouse". The matter was settled out of court.

Bradman died just a month after the road in Adelaide was renamed.