Defiant huntress, 26, who shot her first animal at age SIX – and has since killed dozens including a 300lb BEAR – slams critics who send her DEATH THREATS, insisting they need to ‘educate themselves’ about the blood sport

A female hunter who has killed dozens of animals including a 300lb bear has hit back at critics who bombard her with death threats, insisting they will not stop her from pursuing her passion – while sharing her dream of one day hunting more exotic animals like red stags and even elephants.

Sales manager Brooke McGee, 26, from Texas, fell in love with hunting when she was just three years old and she shot her first animal at the age of six. Her father, Craig, 54, had been hunting since he was a child and wanted to pass the tradition down to Brooke and her siblings.

At six years old, she hunted her first animal; a whitetail doe. She recalls the experience being exciting and after the animal was hit by the lethal shot, Brooke helped to process the deer for meat so that she could learn how to provide for herself and her family.

For Brooke, a typical day during deer hunting season – which takes place in October – involves waking up at 5AM, dressing in camouflage from head to toe and heading out to the fields. She will usually trek there before daylight and place stands on trees so that she can stalk her hunt and make the perfect shot. 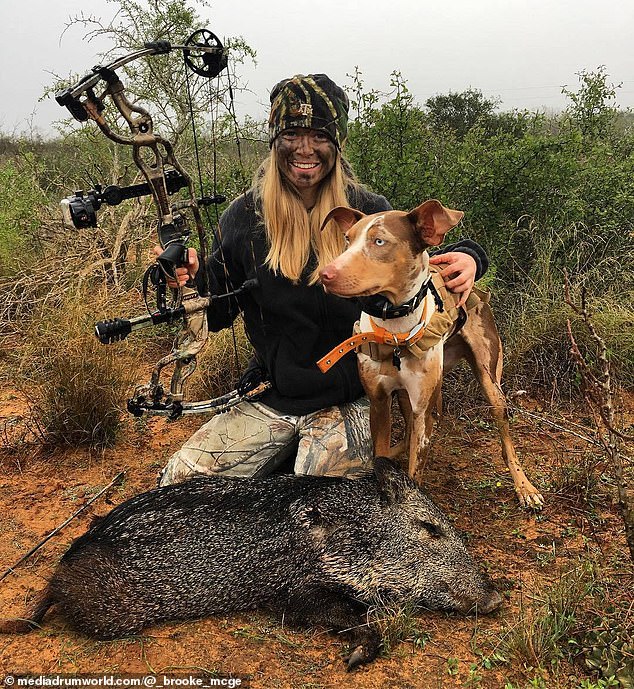 Passion: Female hunter Brooke McGee first fell in love with hunting when she was just three years old, and she has killed dozens of animals since shooting her first at age six 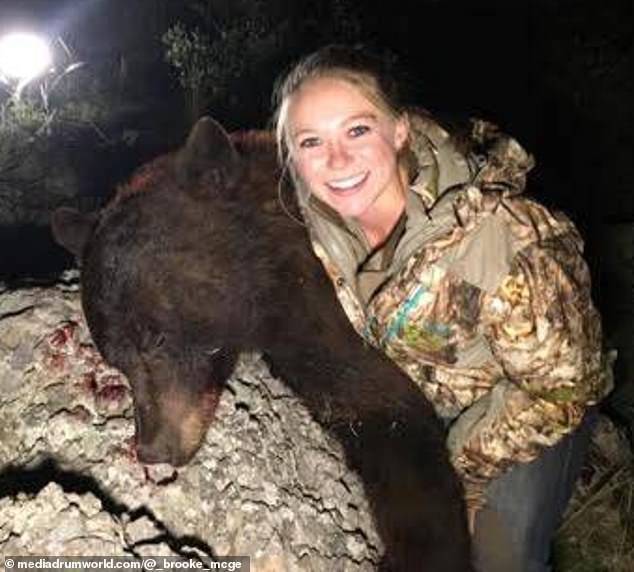 Defiant: The 26-year-old Texan regularly shares photos of her kills on social media – including this 300lb black bear she shot at age 16 – where she faces bitter backlash from critics 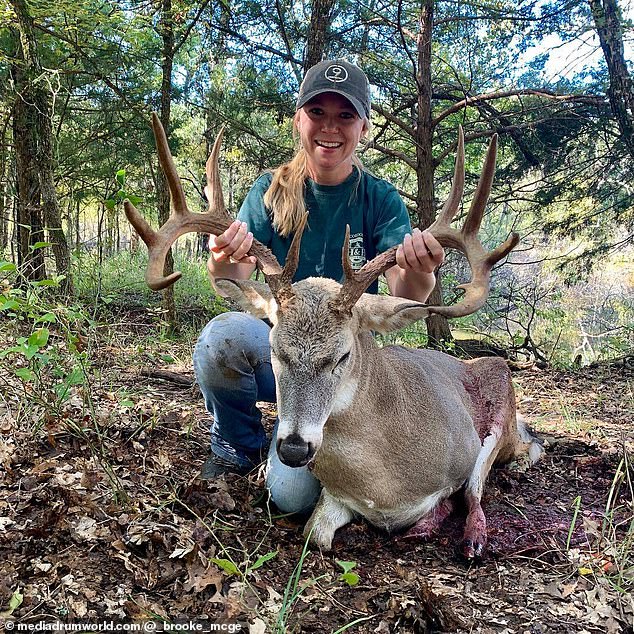 Fighting back: Brooke insists that many of her critics need to ‘educate themselves’ about the blood sport

Although there is a lot of trial and error involved within hunting, there is an intense adrenaline rush when she successfully makes a kill. Despite this, she also feels sad after taking a life, as she has learned to respect these animals – but believes that as living and dying is a natural occurrence, there has to be a balance between the two.

After the hunt, Brooke proceeds to tag the deer so that game wardens know it was a legally harvested animal. She will then bring the animal back to her barn where she will clean the animal fully before processing the meat and turning the kill into steaks, jerky and sausages. 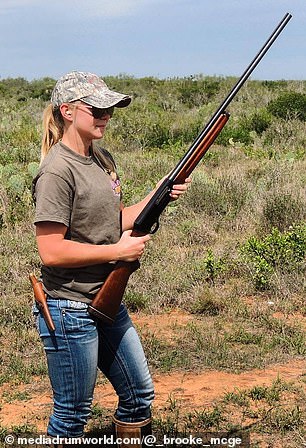 Look forward: The hunter says she will not allow criticism to stop her from pursuing her passion, revealing that she now wants to travel around the globe to hunt more exotic animals – including elephants

Since starting her hunting journey she has hunted rabbits, whitetail deer and her largest kill to date, a 300-pound black bear when she was just 16-years-old.

She now hopes to travel the world and hunt big game animals such as brown bears, red stags and even elephants.

‘I fell in love with hunting when I was just three-years-old, as my dad used to take me out to the field and teach me all about gun safety,’ Brooke said. ‘My dad began going with his grandad when he was a young boy and he wanted to pass the tradition down to me and my sisters – so decided to take me out as soon as I showed an interest.

‘He would wake me up at the crack of dawn, carry me out on his shoulders and then we would spend hours together hunting everything from rabbits to whitetail deer.

‘At the time, I was just a spectator as I was too young – but it was a bonding experience for us and I loved every minute. As I was raised in a family who comes from a background in the outdoors, everyone has been so supportive of my passion for hunting.

‘I was six years old when I got my first harvest, which was a whitetail doe. It was an extremely exciting event for me and as I had spent years watching my dad and practicing on targets, I was sure to make my first shot, a lethal shot.

‘Afterward, I had to help dress the deer so we could process the meat and I learned from a very young age how to provide for myself and my family.

‘A typical day hunting usually involves waking up at five in the morning and dressing in camo from head to toe. In October, this is when the deer season in my county starts so this is when I typically go hunting.

‘We have large oak trees which we hang stands from, so I’ll usually make the trek out to the stand before daylight, watch the sun come up and prepare for the day ahead.

‘The majority of deer season is spent right in the trees in complete silence, in the hope that the animal I am looking for gives me a shot.

‘Despite the pictures on social media, there is a lot of down time and failure involved when hunting – I didn’t fill a single tag last deer season despite getting out in the field more than I have ever done. 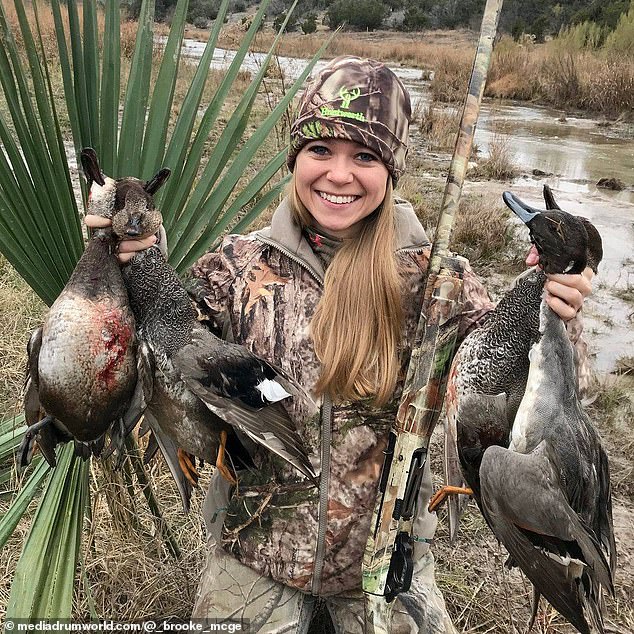 Process: ‘A typical day hunting usually involves waking up at five-in-the-morning and dressing in camo from head to toe,’ Brooke explained 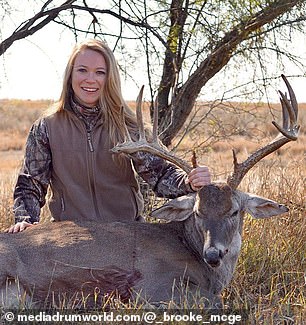 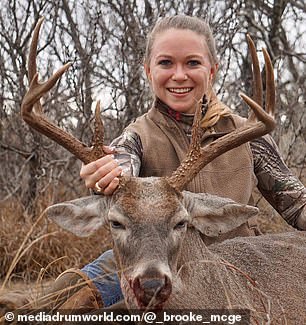 Motivation: Brooke says that she hunts for many other reasons than just the thrill of the kill, she also loves spending time in nature and being able to provide food for her family 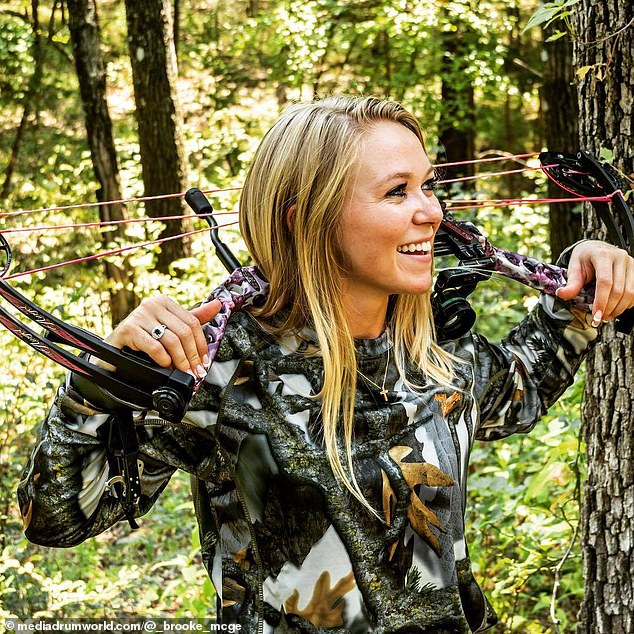 Together: ‘I normally hunt on my own, but from time to time, my dad or sister will join me which I love as it makes it a family experience,’ said Brooke

‘I hunt for lots of different reasons; it’s exciting seeing all of your hard work come together and I enjoy harvesting organic meat from my kills which I then get to share with my loved ones, as well as just being able to spend time in nature.

‘The feeling when you get a kill is a hard one to explain – on one hand, you feel a rush of adrenaline which makes you eager and excited for more, but then there’s also an amount of sadness intertwined.

‘After spending enough time out hunting, you learn to respect these animals and the natural order. Living and dying is a natural occurrence and there has to be some balance between the two.’

Once a successful hunt is over, Brooke will firstly tag the deer so people know it’s a legal harvest and will then bring the animal back to her barn where she will clean and process the meat.

‘I normally hunt on my own, but from time to time, my dad or sister will join me which I love as it makes it a family experience,’ said Brooke. ‘I enjoy both rifle and bow hunting, but my preference is bow hunting as it’s a lot more challenging, but you get to be a lot closer to the wildlife.

‘I think my biggest achievement was when I took down a three-hundred-pound black bear whilst in New Mexico when I was just 16 years old.

‘I recall it being a very fast-paced hunt with lots of dogs as they used their noses to find the scent of a fresh bear trail and once this happened, the race was on.

‘I was with an outfitter that worked with a local farm and ranch owners were having trouble with the bears killing their deer, cattle and fawns.

‘I killed the bear in one swipe with my bow and then proceeded to clean him before going back to the office to have him documented. 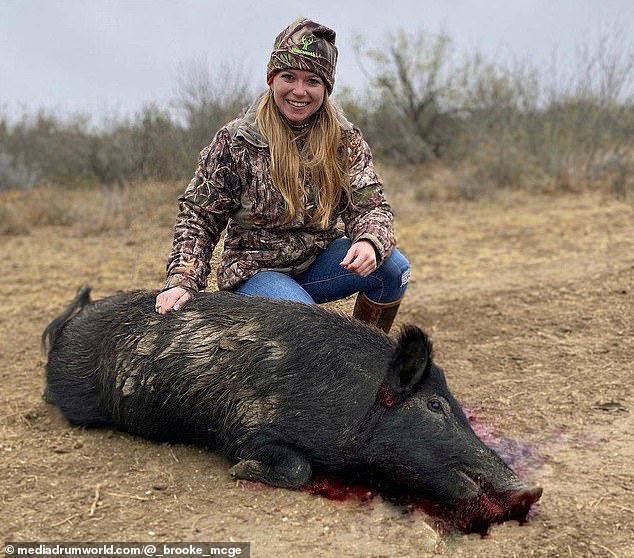 Debate: While some critics regularly slam Brooke’s hobby – even sending her death threats via social media – she is also met with support from some, who praise her skills 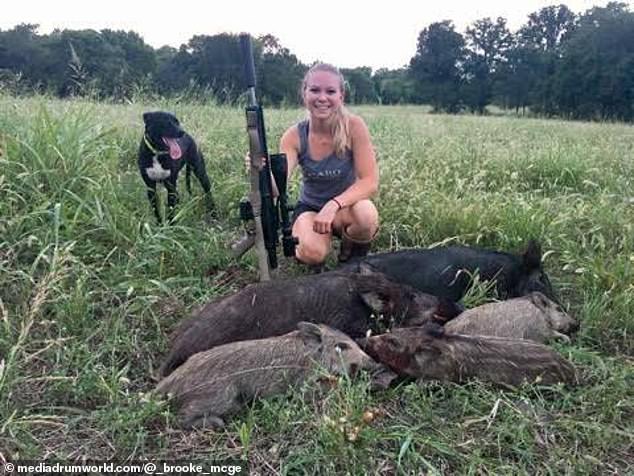 Passion: ‘I surround myself with like-minded people who love to see my adventures, so the feedback on my pictures is usually pretty positive and supportive,’ she explained 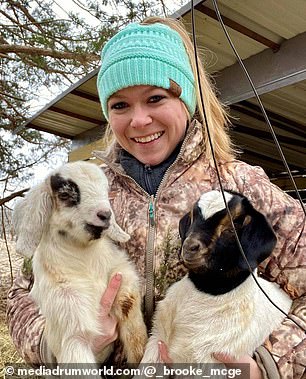 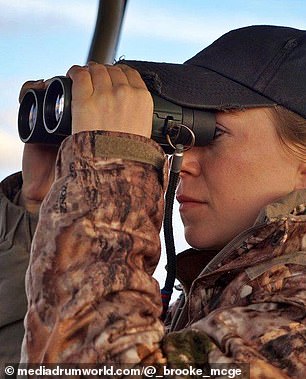 Goal: ‘My goal is to travel around the world hunting big game, such as brown bears, red stags and elephants,’ she continued

‘Although I love hunting, there are many issues involved. As I hunt wild animals, it’s hard to try and guess where they’ll be, what the best vantage point is and when they will be there.

‘It’s also a very expensive sport as good quality equipment doesn’t come cheap. Also, a lot of people don’t understand why I do what I do, so there’s lots of hate that comes from doing this.

‘I surround myself with like-minded people who love to see my adventures, so the feedback on my pictures is usually pretty positive and supportive.

‘I’ve had hundreds of encouraging comments such as, “You are seriously my hero” and “Wow, impressive. You’re definitely the real thing” which makes me feel happy and proud of my sport.

‘However, there’s a lot of negativity that surrounds the sport and although most comments are pretty mild, there’s been some hateful and ugly ones.

‘I remember once someone calling me a lot of horrible names and then saying that they hope I die. Myself and my little sister have had loads of death threats and we’ve been called every name under the sun.

‘Although the comments used to really get to me, as they made me question everything I have ever known, I’ve come to understand that the world can be a hateful place and no matter what I do, there are going to be people who disagree.

‘My goal is to travel around the world hunting big game, such as brown bears, red stags and elephants. I know this will change everything I know about hunting as the culture is very different in other countries, but I’d love to have this opportunity and to see the world.

‘At the end of the day, I am taking life and that’s always a little sad and I completely understand that hunting isn’t for everyone – but if you’re going to criticize my way of life, please educate yourself on the facts before doing so.

‘It’s common to think that a hunter only cares about the harvest; but it’s so much more than that – it’s the smell of coffee brewing at the crack of dawn, the cold air that hits your lungs and the peace that comes with sitting and waiting for the sun to come up.’