Home » Lifestyle » ‘I have done no wrong’: Christine Holgate says her gender was a factor in being forced out of Australia Post

‘I have done no wrong’: Christine Holgate says her gender was a factor in being forced out of Australia Post

Former Australia Post boss Christine Holgate has piled more pressure on Prime Minister Scott Morrison over his government’s treatment of women, alleging he bullied her out of a job as the first female chief of the postal service.

Dressed in suffragette white, Ms Holgate tore into the Morrison government over its treatment of her and alleged her gender was “absolutely” a factor in her controversial exit from Australia Post over her decision to reward four employees with Cartier watches in 2018. 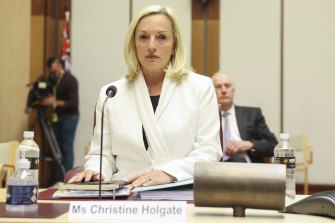 Christine Holgate takes her seat at the start of the Senate hearing on Australia Post at Parliament House.Credit:Alex Ellinghausen

“He has people in his cabinet, he has members of parliament, who are being accused of the most terrible atrocities to women … and they’re allowed to stand and still remain in their jobs and represent our country. I was forced to stand down,” Ms Holgate told a Senate inquiry on Tuesday.

She said she was left contemplating suicide as a result of the bullying and intimidation she endured over the watches saga, which she said included Mr Morrison humiliating her in the Parliament.

“I lost a job – a job I loved – because I was humiliated by our Prime Minister for committing no offence and then bullied by my chairman Lucio Di Bartolomeo, who unlawfully stood me down under public direction of the Prime Minister,” Ms Holgate told the hearing.

“I have done no wrong. Their bullying of me was far from over. I was subjected to a biased investigation and intimidated with constant threats of further allegations and criticism.” 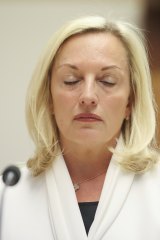 Mr Di Bartolomeo maintained that Ms Holgate reluctantly agreed to stand aside in conversations between the pair on the afternoon of October 22. Ms Holgate claims she did not speak to Mr Di Bartolomeo at all following Mr Morrison’s remarks in question time and instead offered to take annual leave via email and in conversations with Australia Post board member Tony Nutt.

“I absolutely did speak to her,” Mr Di Bartolomeo said, telling the inquiry Ms Holgate called him at 4.27pm and 5.50pm, and he called her at 6.38pm.

He said Communications Minister Paul Fletcher contacted him after question time that day and informed him there would be an independent investigation and requested Ms Holgate stand aside.

“I questioned whether that was necessary, but I clearly came to the conclusion that it was in Christine and Australia Post’s best interests if she did,” he said.

Australia Post executive Sue Davies, who was by Ms Holgate’s side on the afternoon of October 22 as she fielded a flurry of telephone calls, supported her account that she did not agree to stand aside.

“I’m not aware and do not recall of any conversations, one-sided, where Christine agreed to stand down,” Ms Davies told the inquiry.

“I was hearing one side of the conversation – I certainly heard Christine requesting leave.”

The opposition also supported Ms Holgate’s resignation at the time.

Woolworths supply chain boss Paul Graham was appointed the new CEO of Australia Post on Monday and will take up the role in September.

Our Morning Edition newsletter is a curated guide to the most important and interesting stories, analysis and insights. Sign up to The Sydney Morning Herald‘s newsletter here, The Age‘s here, Brisbane Times’ here, and WAtoday’s here.