Have you ever looked at a foil-wrapped burrito and thought, “This is good, but what I’d really like is a cheesy pasta burger, covered in breakfast cereal?”

Robert Pattinson, megastar, is right there with you.

The man who contains multitudes—Cedric Diggory, Edward Cullen, and Batman, all in one bleach-colored body—contains yet one more: pasta innovator. In a cheerfully lunatic cover interview in GQ, Pattinson, quarantining in London where he was shooting the upcoming Batman movie, demonstrated his ability to turn food into inedible food.

Here’s how Pattinson tells it. Last year he was struck with an idea. Pasta should be a fast food. There are so many popular handheld foods: bagels, burritos, empanadas, kati rolls, pierogies, tamales, gyros! And of course, the big dogs: sandwiches, burgers, and pizza. Pasta, queen of carbs, deserves its own place of honor. “I was trying to think, How do you make a pasta which you can hold in your hand?”

He designed a prototype. He met with a pasta expert. He even came up with a name: Piccolini Cuscino, or Little Pillow. And then he made it, during his interview, and his kitchen exploded in flames.

I attempted to recreate his recipe and document the process for journalism. Here is how that went: 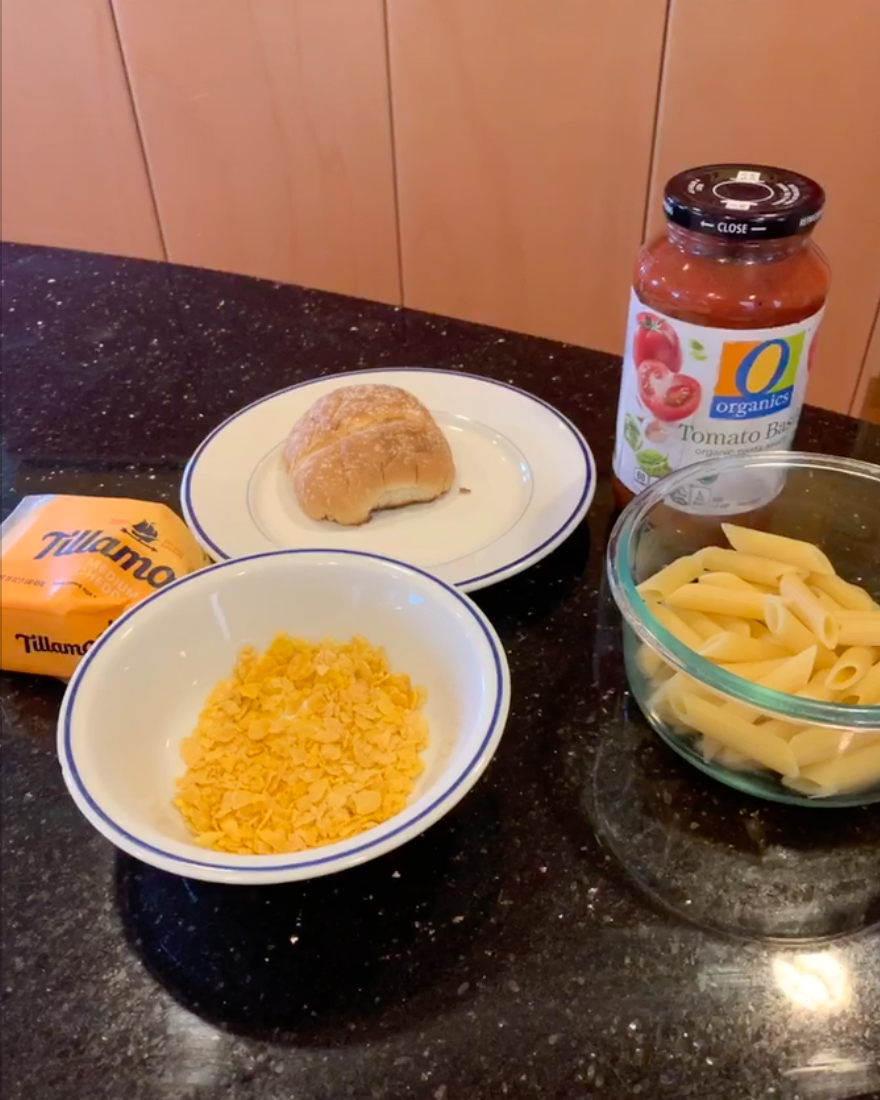 Fresh ingredients from the farmer’s market!!!

First I consulted the source text. “So obviously, first things first, you gotta microwave the pasta,” Pattinson tells GQ. This feels like a red flag. Do you ever *have* to microwave pasta? Would it not be better to eat uncooked pasta than to fast-boil it in its own sweat, using radiation? Or is that my pretentious, big-city, water-and-stovetop snobbery talking? “That’s not a thing,” Zach Baron, who interviewed Pattinson for GQ, told the actor, who disagreed. “Put it in a bowl and microwave it,” he told Baron. “That is how to microwave pasta.”

Touché! Putting pasta in a bowl of water and putting it in the microwave for Pattinson’s recommended eight minutes felt wrong. Is this what doing drugs feels like? Or committing voter fraud? Maybe! After eight minutes the pasta is very, very al dente.

Next I was supposed to make a bowl out of aluminum foil, per Pattinson’s instructions. I do not have aluminum foil, so I used parchment paper, which I molded inside an actual bowl, and then kept inside that bowl, since it did not seem like it would keep its shape.

After that, I was meant to crush breadcrumbs or cornflakes (“I went to the shop, and they didn’t sell breadcrumbs. I’m like, ‘Oh, fuck it! I’m just getting cornflakes,” Pattinson says. One of the top 15 most amazing things about this recipe is that Pattinson intentionally purchased these ingredients at a store and made the active choice to put them together.) Then Pattinson recommended crushing cornflakes on the surface of the bowl, to make a thin layer. This will form the “sugar crust.” (Handheld pasta “really needs a sugar crust,” Pattinson explains.)

Traditionally, cereal poured into a bowl will fall to the bottom of that bowl and not form a crust. I do not know if Pattison is the exception here. I drizzled olive oil all over the parchment paper so the sugary cereal would stick to the sides, forming a pasta bowl. Just like they do in Tuscany! 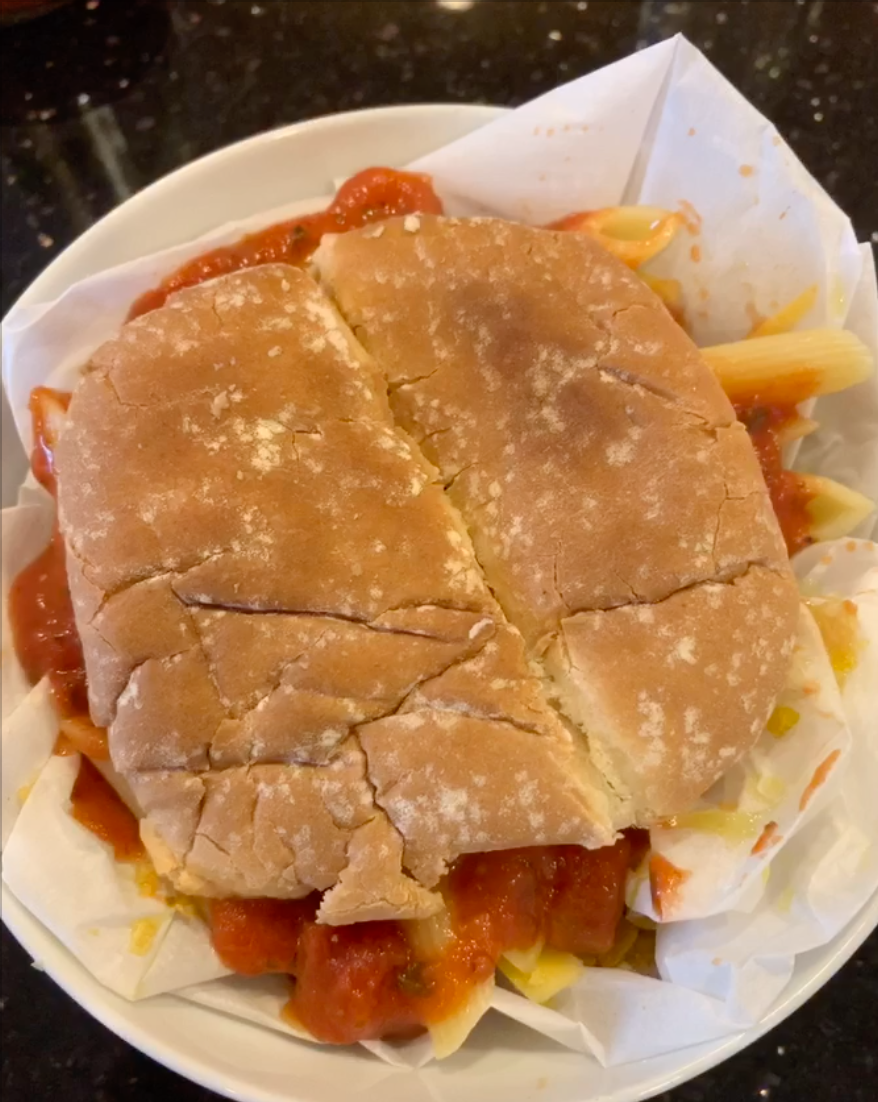 What could possibly go wrong with this, I ask of you?

Here’s where things get wild: Layer up to nine packs of presliced cheese on top of the sugar crust. (“I found after a lot of experimentation that you really need to congeal everything in an enormous amount of sugar and cheese.”) Pour on sauce. (Pattinson says you can use “any sauce,” but can you? Peanut sauce? Wing sauce?) Throw on the pasta. Sprinkle on more sugar. Top it with a hollowed-out burger bun.

Pattinson is unlikely to make the leap from performer to professional foodie, but he does demonstrate, surprisingly, body-positivity goals. Explaining that he hasn’t been doing much physically during his downtime to prepare for playing Batman, he said, “I think if you’re working out all the time, you’re part of the problem.”

“You set a precedent,” he added. “No one was doing this in the ’70s. Even James Dean—he wasn’t exactly ripped.” During his time filming the Twilight movies, he said, he was asked to take his shirt off one time, and then: “I think they told me to put it back on again.” This is a strangely beautiful, radically self-accepting thing to say in an interview. It is the sugar crust on top of the pasta burger, you might say.

Anyway, back to the food: Brand the letters PC (Piccolino Cuscino) into the top of the bun with a lighter. I didn’t have a lighter, so I used a birthday candle. It did not work! Wrap the whole thing in aluminum foil and put it in the oven for 10 minutes. According to Baron, Pattinson accidentally put it in the microwave instead, where it promptly exploded.

I put it in the oven at 325°F instead of in the microwave covered with aluminum foil because I want to avoid starting a house fire during a pandemic. However, I forgive Pattinson for his lapse of judgement, since he compared the Twilight movies to “existential art-house movies,” which is very true, so screw everyone who mocked my handmade “Team Edward” shirt in 2007.

“His search for truth is relentless,” the actor Juliette Binoche told Baron, in the article. Interesting, interesting!

I took the pasta out…later—I don’t know how much later, in honor of Pattinson explaining in the interview that he doesn’t know the difference between a few weeks and “two years and six months.” 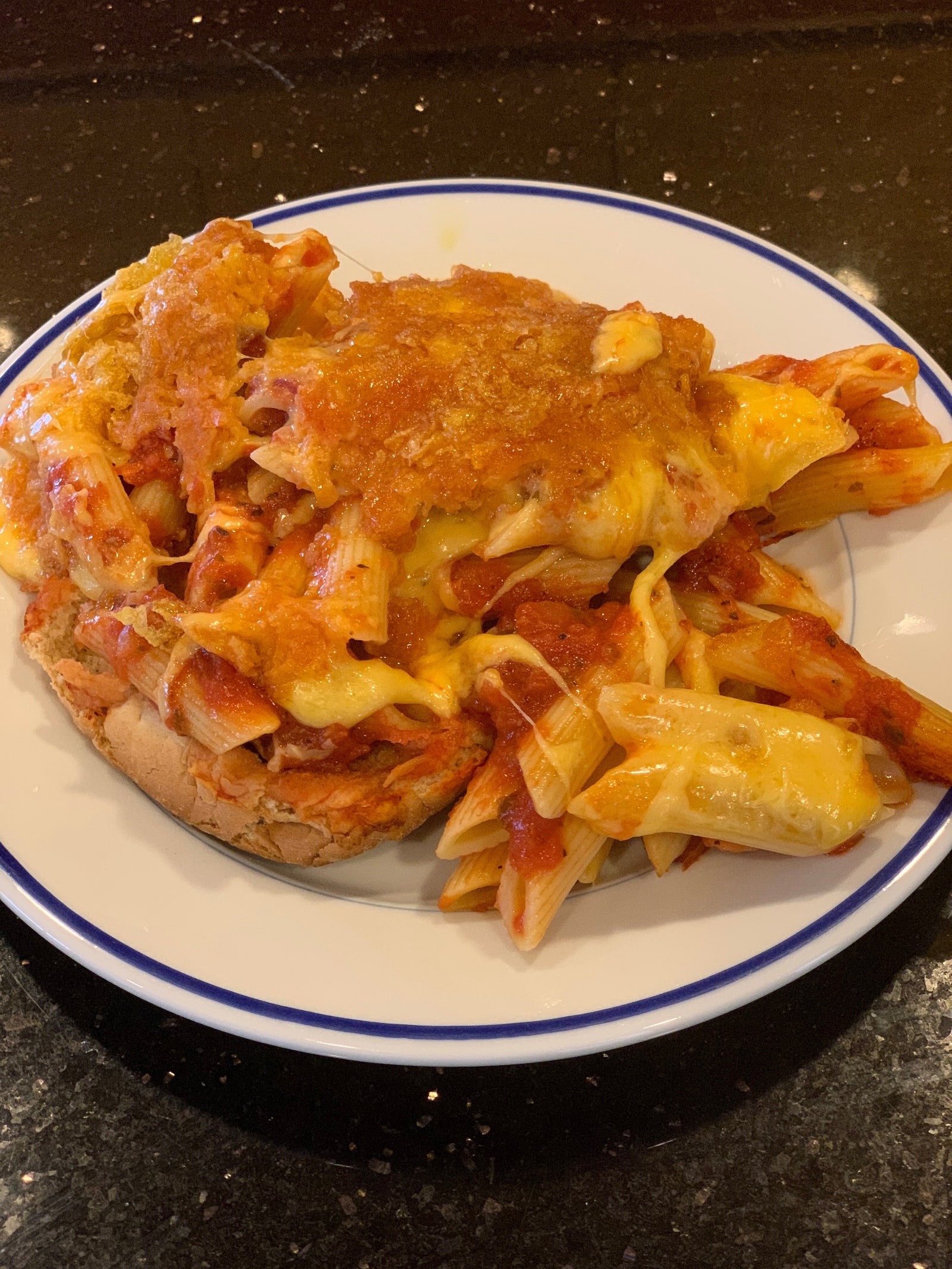 The pasta is not good. But neither is it bad. In no sense is it portable. It would be easier to drink hot soup on a treadmill than to eat this pasta without a fork. If I was served the undercooked pasta, sweetened sauce, and cheesy sugar crust in a restaurant, I would have probably eaten at least half of it. Since I had poured every crystal of sugar onto the olive oil and then smashed in the burned hamburger bun myself, I gagged slightly. Is Robert Pattinson trying to teach us that arbitrary class indicators limit our perception far beyond what we typically realize? Maybe!

It’s not clear if the Pattinson Pasta was intended as a legitimate cooking demonstration or a passive resistance against celebrity interviews or a commentary on overconsumption or just a bored-in-the-house-and-we’re-in-the-house-bored diversion.

But it doesn’t matter. Hold your fleshy carb cube close. Feel the warmth melt through the aluminum foil into your hand. And thank Robert Pattinson.