‘I was going to die’: Jeff Kennett reveals freak accident

Former Victorian premier Jeff Kennet has revealed he thought he was going to die when he was dragged underneath his car as it rolled down his driveway and crashed through his front gate.

Earlier this year, the Hawthorn president set the rumour mill alight after he appeared in public with a neck brace and cane and spoke in hushed tones rather than with his booming voice. 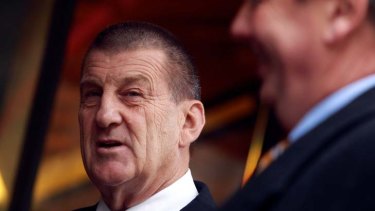 "I thought I was going to die, I really did," he said.

In a podcast called You Cannot be Serious – featuring Sam Newman – the former Liberal premier spoke of the incident that occurred at his Surrey Hills home in January.

"I got out of my BMW and left the driver's door open … got out of the car to put rubbish in my rubbish bins which were closer to the front gate.

"I looked around and saw the car starting to roll back …. I stupidly tried to stop it."

Mr Kennett attempted to jump into the car as it was rolling down a slight incline, but managed to get only half his body into the car, with the other half dragging underneath the vehicle as he hung onto the car seat.

"The car kept rolling [and] I was very conscious I had to keep my legs away from the front wheels," he said.

The car crashed through his metal front gate causing the door to squash his body, bruising him badly but failing to break any bones.

The car came to a halt, with Mr Kennett still underneath it, on the nature strip on the other side of the road.

Weeks later, Mr Kennett experienced a lack of power in his legs. It was determined he needed neck surgery, which caused him to lose his voice.