In premiers we trust, but coronavirus crisis gives federal government ‘massive shot in the arm’

More Australians have confidence in the performance of their state premier than the Morrison government after a year of dealing with the coronavirus pandemic.

Despite this, twice as many people have confidence in the federal government compared with a year ago, although there are signs this is starting to drop, a long-running Australian National University survey shows. 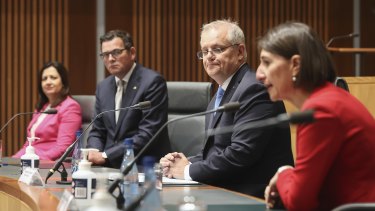 Researcher Nicholas Biddle and his team asked people whether they had confidence in federal and state governments, hospitals and the health system, police and public servants. The federal government came in at the bottom of that list.

Across the country, 70 per cent of the 3500 people surveyed in January said they had confidence in their state or territory government, a figure that has remained reasonably consistent over the past year.

Fifty-four per cent said they had confidence in the federal government’s performance, up from 27 per cent in the midst of the bushfire crisis in January 2020.

Victorians were more confident than the national average in their state government (72 per cent), having weathered the second wave of coronavirus cases, and had less confidence in the commonwealth (51.5 per cent) than the general population.

In NSW, 55 per cent had faith in the federal government – slightly above the national average – compared with 68 per cent in Gladys Berejiklian’s government.

“In many ways, the COVID-19 crisis has been a massive shot in the arm for the government and the Prime Minister; clearly many Australians think they have handled the crisis well,” he said.

But the January numbers were a “moderately large decline” from November, when the Morrison government held the confidence of three in five Australians.

“There are some early signs that confidence may be waning as the pandemic response enters a new phase – something for the federal government to keep a close eye on,” Professor Biddle said.