Home » Lifestyle » ‘In terms of acting, men and women are on a different trajectory’

‘In terms of acting, men and women are on a different trajectory’ 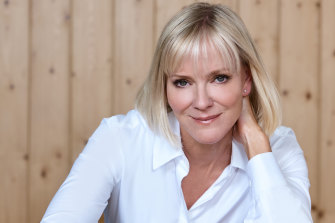 Hermione Norris: “My dream was to be an actor. I wanted to meet someone, but I wasn’t desperate.”Credit:Tarsha Hosking

My paternal grandfather, William, was in the first and second world wars. He had the type of moustache worn by soldiers at that time. Every year he had to have shrapnel removed from his leg, as he’d been exposed to bombs. In his sleep, he called out to boys in the trenches. He didn’t play much of a role in my upbringing, though, as I only saw him occasionally.

My father, Michael, was a businessman. He was charismatic, naughty and very, very funny. We share a particular take on life – the same sense of humour, most definitely.

He lived in London and collected art and loved anything to do with music. When I was young, he’d come to see my shows. He died when I was 21. I was utterly shattered.

He and my mother, Helen, divorced when I was five. She moved my three siblings and me from London to Derbyshire so she could be near my grandmother, Grace.

I was 11 when I won a scholarship to Elmhurst School for Dance. I wanted to be a ballet dancer. Andrew Neil, a director from the Royal Academy of Dramatic Arts, came to teach. He was incredible. He took me under his wing and mentored me. He is probably the reason I became an actor, as he made the profession a viable reality for me.

My first crush was an actor called Benedict Taylor. He starred in the TV series Barriers. I thought he was the most beautiful man. I also liked David Cassidy. He was gorgeous.

I was quite wild as a teenager. I was full of drive and hunger for life. At first I wanted to be a dancer, then an actor. I was committed, passionate and focused. It was a dream come true when I was accepted into the London Academy of Music and Dramatic Art.

I went out with a young actor called Dan at drama school. Our relationship lasted almost three years. It was my first heartbreak when it finished.

My TV debut was in the 1991 BBC miniseries The Men’s Room. I played Bill Nighy’s daughter. Bill is someone I love very deeply. He is a good friend and is funny, sweet and kind.

In 2001, I was working in Sydney on the comedy-drama TV series Cold Feet. I was in my mid-30s and, during interviews, questions about marriage and children cropped up. My two sisters’ dream was to get married and have children. Mine was to be an actor. I wanted to meet someone, but I wasn’t desperate.

When I returned to England, I met my husband, screenwriter and producer Simon Wheeler. He developed the scripts for Wire in the Blood, in which I appeared. The first night we met, Simon said he was going to marry me.

We had a Christmas wedding at the Tower of London in 2002. We got permission to have it there because Simon’s father was a general in the army. I had an honour guard with Yeoman Warders. I wore red velvet and we had a baroque orchestra. Bill Nighy read a piece. It was amazing.

We called our son Wilf. It was Simon’s idea, and it is derived from the Anglo-Saxon name, Wilfred. I’m glad it stuck – he’s 16 now and a Wilf through and through.

If I had a daughter, I was always going to call her Hero. At drama school, there was a woman named Hero who locked up the rehearsal rooms. She was in her 80s and had long, white, waist-length silver hair. I thought her name cool, so gave it to our daughter when she was born in 2007.

Australian writer Bevan Lee’s characters and narrative drew me to the Between Two Worlds scripts. They are so finely drawn and exciting. Bevan is so passionate about his work, and I admire what he has given the Australian TV industry.

In terms of acting, men and women are on a different trajectory. Age is welcoming for men, yet for women across all industries, ageing is a bad thing and is something to be avoided.

It’s brilliant that older women are becoming more represented on our screens. They have a huge beauty, wisdom and gravitas. You want to see your life and reality reflected back at you, and see real women in real life.

Between Two Worlds screens Sundays at 8.30pm on the Seven Network.

This article appears in Sunday Life magazine within the Sun-Herald and the Sunday Age on sale August 2.