Inside the Queen's White Drawing Room at Windsor Castle

Inside the White Drawing Room at Windsor Castle: Queen delivered her speech surrounded by items steeped in royal history – including an 18th century cabinet and a carpet that survived the 1992 fire

The Queen offered a message of hope and unity in a televised speech broadcast to the nation last night.

The speech was pre-recorded in the White Drawing Room at Windsor Castle, where the Queen, 93, and the Duke of Edinburgh, 98, are currently in joint isolation during the coronavirus lockdown.

The White Drawing Room is one of three semi-state rooms that were created as private apartments for George IV. They feature interiors decorated by Morel & Seddon, with a selection of furnishings and fittings taken from Carlton House, George IV’s former London residence. The rooms, which also include the Crimson and Green drawing rooms, are now used by the Queen for formal entertaining.

The White Drawing Room also served as the backdrop for the wedding photos of Prince Charles and the Duchess of Cornwall, and Princess Eugenie and Jack Brooksbank.

A closer look at the room reveals how the Queen chose to surround herself with royal history for her address, from an ornate 18th century cabinet to a carpet that survived the devastating Windsor Castle fire in 1992. 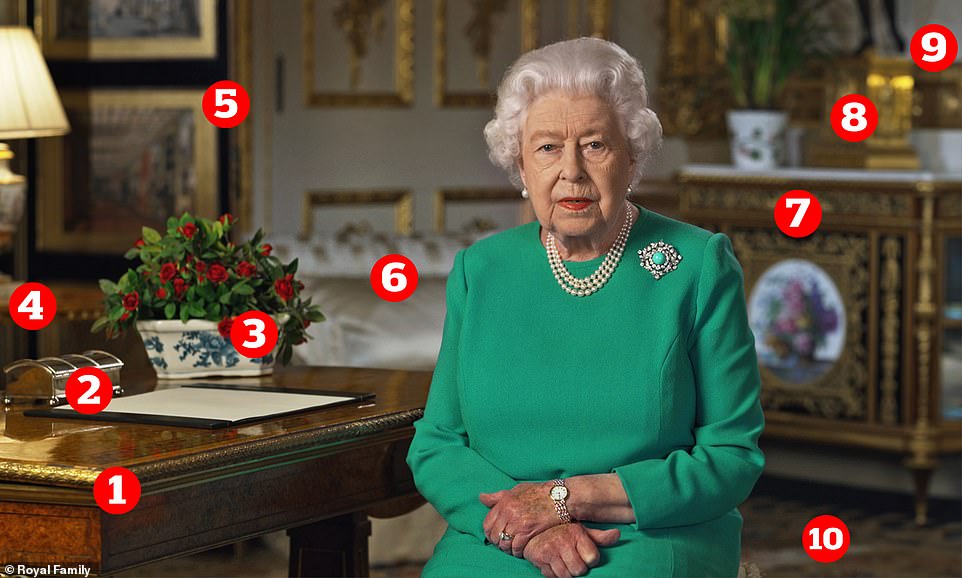 As is typical for a televised speech, the Queen was filmed sitting at a writing desk. It is the same desk in varnished wood that was featured in Her Majesty’s 2019 Christmas speech.

For her annual Christmas speech, the Queen is surrounded by a selection of family photos that are carefully chosen and displayed on the desk for the audience to see. However the royal family chose not to decorate the desk in such a way for this speech, hinting at the more formal tone. Instead there is a black leather desk mat with a blank pad of paper and an understated silver pen box. The box also appeared in her Christmas speech last year.

At the corner of the desk is a simple white and blue ceramic plant pot filled with flowers. The blooms are thought to be a variety of miniature rose.

To create a sense of intimacy in the vast space, a round side table has been placed behind Her Majesty. The table is clear except for a single white ceramic table lamp that is thought to have been moved from elsewhere in the room. It has been housed in the White Drawing Room for more than 30 years and appeared in a 1987 photograph taken of the Queen and Prince Philip to mark their ruby wedding anniversary. 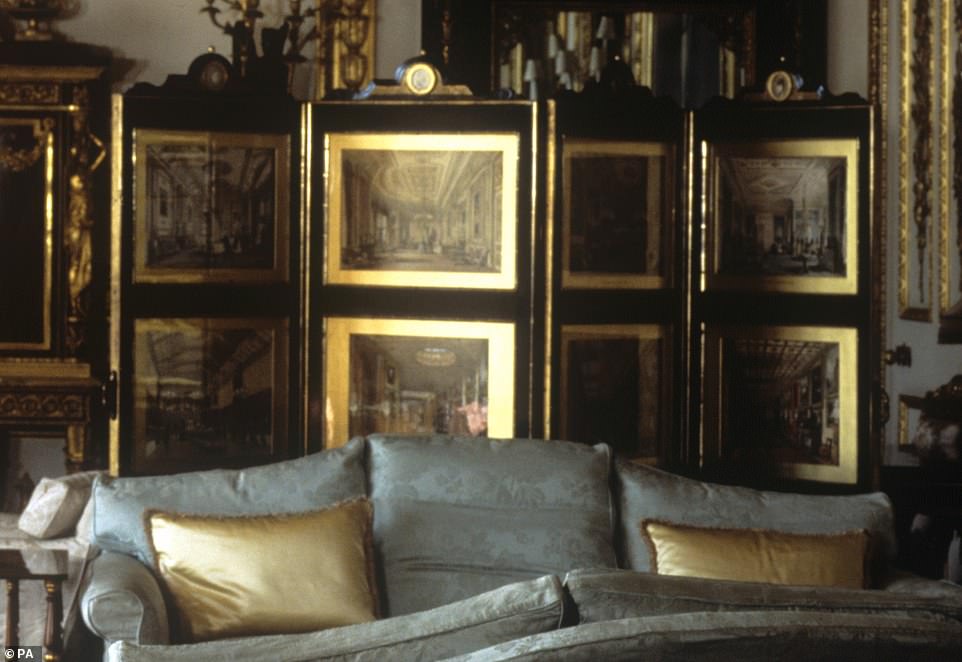 In the background of the photograph there is part of a four-panel folding screen that is used to partition the vast drawing room. The folding screen is seen in a different position in the White Drawing Room in 1992

In the background of the photograph there is part of a four-panel folding screen that is used to partition the vast drawing room. Although not distinguishable in this photograph, displayed on each of the screens is a series of scenes.

Behind Her Majesty is a single white armchair, part of a pair that are housed in the White Drawing Room. The chairs are moved around the space as needed to accommodate varying number of guests. The armchair is upholstered in a fabric with a glossy finish, similar to satin. They match a blue three-seater settee in a similar fabric. 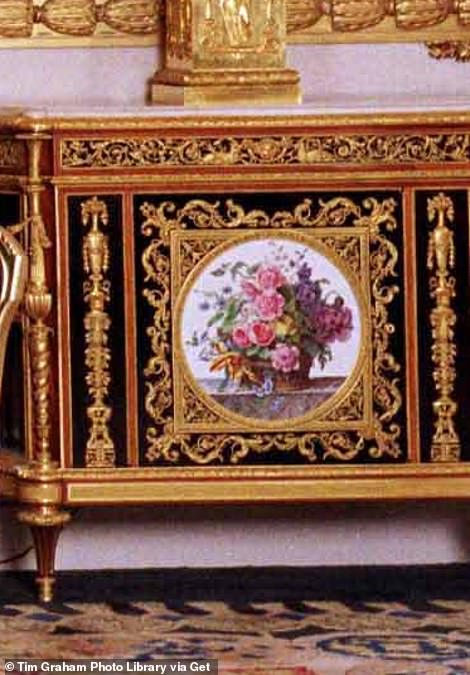 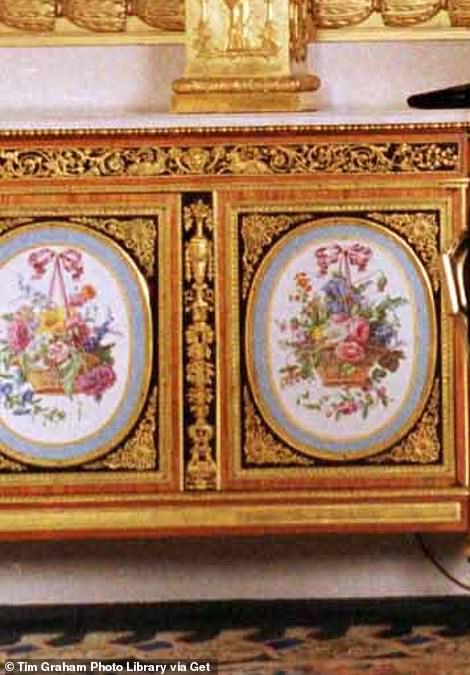 Details of the cabinet seen in the background of the Queen’s video (left) are not known but it looks strikingly similar to one designed by Martin Carlin (1730-85), right, which was designed circa. 1783. The cabinets are seen above in a 1997 image

This cabinet is part of a pair, which are often positioned at either side of the large double doors that lead from the White Drawing Room to the Crimson Drawing Room and onto the Green Drawing Room. The other cabinet in the set is an oak cabinet veneered with tulipwood, purplewood, mahogany and boxwood; fitted with brocatello marble, elaborately chased gilt bronze mounts and inset with ten soft-paste porcelain plaques. The cabinet was designed by Martin Carlin (1730-85). The similarities between the two suggest they could have been made by the same craftsman around the same time, although this is not confirmed. 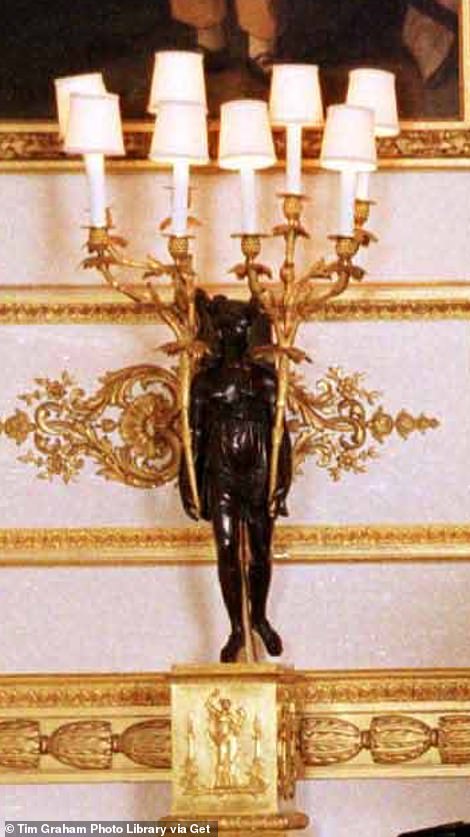 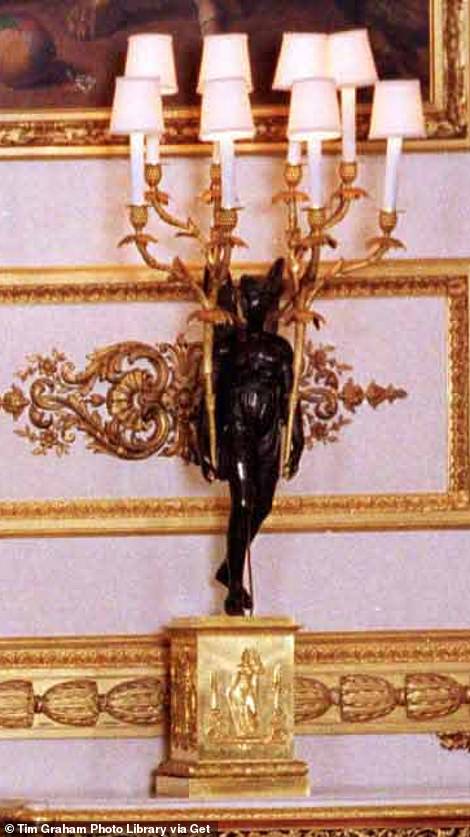 At the top right of the image is the gold base of a candlearbra. The lighting fixture takes the shape of a man, although only the feet can be seen. Pictured, the candlearbra seen in the Queen’s photo (left in a 1997 image) and the matching pair (right)

Just seen at the top right of the image is the gold base of a candlearbra. The lighting fixture takes the shape of a man, although only the feet can be seen. It is part of a set that is moved around the White Drawing Room as needed.

9. Portrait of a child with sword

Out of frame at the top of the image is the portrait of a young child holding a sword, although it is not known who it depicts

Out of frame at the top of the image is the portrait of a young child holding a sword, although it is not known who it depicts. The same painting features in the background of Princess Eugenie and Jack Brooksbank wedding photos.

The floor of the White Drawing Room is covered with a carpet by famed Devon-based manufacturer Axminster Carpets that dates back to at least 1890. The carpet was damaged by smoke in the Windsor Castle fire of 1992 but has since been restored.