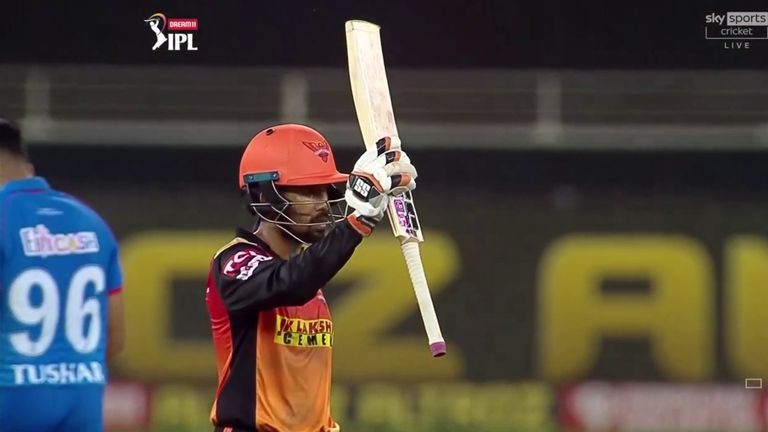 Wriddhiman Saha scored a superb 87 from 45 balls as Sunrisers Hyderabad posted a record T20 total at the Dubai International Stadium in thrashing Delhi Capitals by 88 runs in the Indian Premier League.

Saha was involved after the surprise decision to drop England batsman Jonny Bairstow, but repaid the faith shown in him with a blistering knock, sharing an opening stand of 107 with David Warner, who made a rapid 66 from 34 balls on his 34th birthday.

That partnership set Sunrisers on their way to a record-breaking 219-2 from their 20 overs, Manish Pandey backing up the openers with a comparatively becalmed 44 not out from 31 balls.

Delhi were never really in contention after losing early wickets and were bowled out for 131 in the 19th over, missing the chance to go top of the IPL as they fell to a third straight defeat, one that drops them to third.

Sunrisers, for whom Rashid Khan took 3-7 in his four overs, are up to sixth, just two points off fourth and remain firmly in the frame for a place in the play-offs with two games to play.

Having been asked to bat, the surprise opening pair of Warner and Saha made the most of some unexpectedly generous bowling from Delhi’s much-vaunted attack as they repeatedly crashed the ball to the boundary.

The pair were ruthless and Warner became the first batsman in this year’s tournament to reach his half-century in the powerplay, racing to 50 from just 25 balls in a Kagiso Rabada over that was pummelled for 22.

Warner is on it today and launches Rabada over deep midwicket for a big six – and four next ball takes him to a 25-ball 5⃣0⃣!

The Australian was finally undone in the 10th over as he sliced the ball to extra cover off Ravichandran Ashwin. There was no respite for the Capitals though as Saha pushed the pace and reached a 27-ball fifty in the next over.

Even when he sustained an injury which prevented him from wicketkeeping in the Delhi innings, there was no let up from Saha as he continued to pepper the boundary until he was dismissed by Anrich Nortje in the 15th over, skewing a banged-in delivery to mid-off.

Pandey took over for the final stage of the innings, dismantling Tushar Deshpande in the 17th over and despite pulling things back with a good final over, Rabada ended with bruising figures of 0-54, the first time since 2017 that he has failed to take a wicket in an IPL match, as Sunrisers comfortably set a new T20 record score on the ground.

A fast start was required for Delhi to have any chance of a successful chase and with two centuries to his name already in the competition this year, Shikhar Dhawan was key to that. So the left-hander sending a leading edge to Warner at cover third ball of the innings and departing for a golden duck, was not part of the Capitals’ plan.

What a start for #Sunrisers! Shikhar Dhawan gone for a duck, sending a leading edge to extra cover off Sandeep Sharma.#DelhiCapitals 1-1. #IPL2020

Sandeep Sharma (2-27) claimed the wicket and was backed up by Shahbaz Nadeem (1-8) in the next over, Marcus Stoinis (5) drilling the ball to Warner again, this time positioned at extra cover. Ajinkya Rahane and Shimron Hetmyer tried to blitz Delhi out of trouble and had some success in doing so as they reached 54-2 at the end of the powerplay.

However, the introduction of Rashid in the seventh over immediately halted their momentum with Hetmyer (16 from 13) bowled by the leg-spinner’s first ball and Rahane (26 from 19) trapped lbw by the googly four balls later.

Delhi needed a miracle and when Vijay Shankar removed Delhi captain Shreyas Iyer in the 12th over, it was clear that one would not be forthcoming, even when the Sunrisers’ seamer pulled up and was unable to complete his second over.

Rashid returned to have Axar Patel caught in the deep and finish off the most economical spell in the IPL this term before T Natarajan bowled Rabada with a superb yorker and Sandeep had Rishabh Pant caught behind next ball. 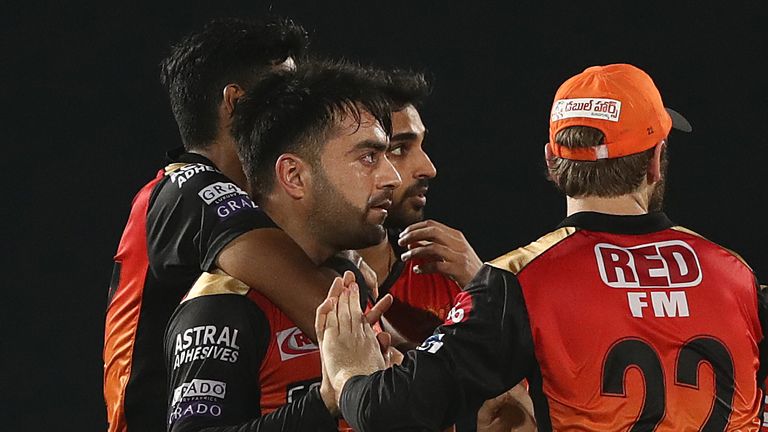 Jason Holder (1-46) accounted for Ashwin to end an expensive stint on a high and, after Deshpande (20no from nine) had had some fun, Natarajan wrapped things up for Sunrisers when he had Nortje caught from the last ball of the 19th over.

The manner of the victory has helped Sunrisers’ net run-rate but they will still need two wins from their last two games to have a chance of reaching the knockout stage. One more win would be enough for Delhi to progress, they may not even need that, and they will be keen to rediscover their best form ahead of the play-offs.

Watch every match of the 2020 IPL live on Sky Sports Cricket. Mumbai Indians vs Royal Challengers Bangalore is Wednesday’s match with coverage beginning at 1.50pm.

You can catch hour-long highlights of each game every weekday at 9pm and then at 8pm and 9pm on double-header weekends.