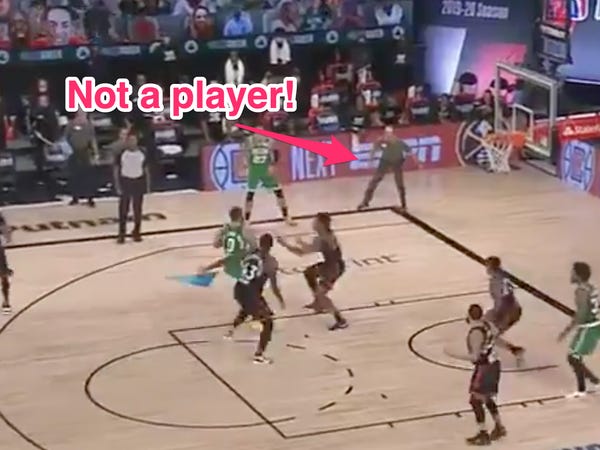 The Toronto Raptors outlasted the Boston Celtics through two overtime periods en route to a 125-122 win on Wednesday night.

The dramatic win means the Raptors have forced a decisive Game 7 in the playoff series set to be played on Friday. While the final minutes of regulation and both overtimes were filled with countless big shots, one of the most important plays of the game came from someone who technically should not have even been on the court — Raptors head coach Nick Nurse.

With the game tied 98-98 with under a minute left in the fourth quarter, Celtics forward Jayson Tatum received the ball at the top of the key. At the same time, Nurse set himself up just off of the court in the corner, even crouching down a bit, and looked at a quick glance like an open shooter.

As Tatum made a move on his defender, he kicked out a pass in Nurse's direction. No Celtics were in the area, and the ball went straight out of bounds.

Toronto got the ball thanks to the Celtics costly turnover, and the game would eventually head to overtime still knotted 98-98. Ten minutes of play later, the Raptors had forced a Game 7.

While it's impossible to know for certain Nurse's intentions, or if his positioning was the cause of Tatum's miscue, the coach's presence on the sidelines cought the attention of many fans following the game.

After the game, Tatum addressed the moment, putting the blame on himself for the turnover.

"I mean, I turned it over. That was my fault," Tatum said, per Celtics beat writer Tom Westerholm. "Can't blame Nick Nurse. He's not playing. It was my fault."

Tatum's teammate, Jaylen Brown, had some harsher words for the Raptors coach.

Just a week ago, it looked as though the Celtics had this series wrapped up, as Boston was just 0.5 seconds away from taking a 3-0 series lead over Toronto. Instead, OG Anunoby hit a season-saving buzzer beater for the Raptors to keep their hopes to repeat as NBA champions alive.

Three games later, the series is tied 3-3, with one game left to determine which team will advance to the Eastern Conference Finals to take on the Miami Heat.

Nurse's gambit might have worked this time, but there's still work left to be done for the Raptors.