John Howard says there is a fundamental lie, albeit a carefully hidden one, at the heart of the campaign by teal independents to remove Liberal Party MPs from what used to be some of his party’s safest seats.

According to the former long-serving Liberal prime minister, if you want a Labor government, then go ahead and vote teal. But if you usually vote Liberal and genuinely support what the party has traditionally stood for, now is not the time to send a message through an independent pretending to be something they are not. 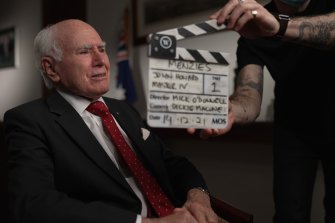 “The subterranean message from these people is ‘we are really true Liberals, give us a vote this time and it will send a message to the government’,” he says.

“Well, if you send too many messages you end up changing the government. If you want to do that, do that, but do it openly. Don’t pretend that you are voting just to send a message to the party you truly love when in reality, you don’t.”

The so-called teal independents are running in a number of historically heartland Liberal seats, such as Kooyong and Goldstein in Melbourne and North Sydney and Wentworth in Sydney, on a platform of focusing on integrity in politics and strong climate change action.

But Howard has previously described the teal movement as “anti-Liberal groupies” who want to destroy the party. He has been a regular fixture in this election campaign and told The Age and The Sydney Morning Herald he would visit Kooyong before polling day to do his bit for Treasurer Josh Frydenberg, the highest profile Liberal being targeted by the well-funded and co-ordinated teal movement. 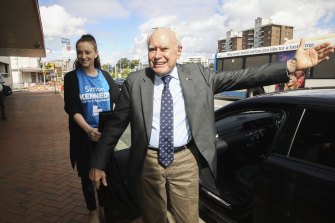 Howard has another reason to be reflective about the present challenges facing the Liberal party. He has just finished watching a series of home videos taken by the founder of the party, Robert Menzies, across the breadth of his time in politics.

He spoke to The Age and Herald on Wednesday to promote a new documentary, The Menzies Movies, which will broadcast the footage for the first time. The footage, taken personally by Menzies and his private secretaries, is held by the National Film and Sound Archive and was provided to the documentary makers by the Menzies family.

It includes Menzies’ emergency flight to London in 1941 to warn the British government of the likely threat Australia and other southern Pacific countries faced from Japan, the friendship he established with Winston Churchill and his family life in Melbourne and Canberra.

The images were taken in colour on a 16mm Kodak camera, which Howard brandishes during the documentary as he recounts with historian Anne Henderson and members of Menzies’ family, the importance to Australia’s wartime security of the 1941 trip. 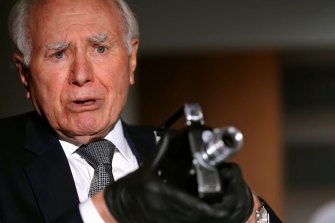 John Howard shows the camera used by Robert Menzie to capture footage of Winston Churchill in 1941.

Howard says his favourite piece of footage is of a cigar-champing Churchill, in a light coat and pork pie hat, feeding bread to swans at a lake while Menzies has his camera rolling. It shows the friendship that slowly developed between Menzies and a man he called a dictator and a dangerous, God-like figure when he first arrived in London.

Other footage captures the devastation of Germany’s bombing raids over England, including at the Dorchester Hotel where Menzies was staying, and a gaping crater where the Old Trafford cricket pitch should have been.

“The relationship did not start well,” Howard says. “Menzies thought that Churchill was unaware of the danger that was posed to Australia, particularly a potential Japanese entry into the war. 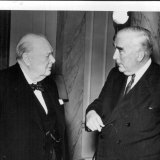 “Over time, Menzies and Churchill became good friends and he admired, as everyone had to, the extraordinary leadership of Churchill.”

Howard, a keen Menzies historian and the author of the 2014 book The Menzies Era, points out that when Australia’s prime minister set off for London on what became a 27-day, 42-stop flight, Australia was one of only a handful of small Commonwealth nations standing by Britain in the war.

The US had not yet entered the war, Russia was still allied with Germany and the rest of Western Europe had capitulated to the Nazis.

“It was a very desperate time,” Howard says.

The electoral challenge facing the Liberal Party next Saturday might also be described as desperate. Although Howard does not accept his party is facing an identity crisis, he agrees its greatest threat is not from teal candidates but from habitual Liberal voters annoyed at the party. 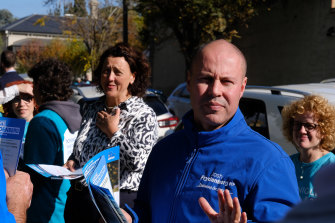 A close contest between Monique Ryan and Josh Frydenberg in Kooyong has become hand-to-hand battle at the electorate’s pre-polling booth in Hawthorn.Credit:Enrique Ascui

“Politically you have a number of people who, not always but normally, voted Liberal and for one reason or another, perhaps length of time in office, are cranky with the Liberal Party and thinking of voting for an independent who are running around saying ‘we really are Liberals, but we think they need a shake up’,” he says.

“The only message I have is a very simple one: you can’t have it both ways. You can’t vote for these so-called independents who are in effect an anti-Liberal group to send a message to the Liberal Party without tipping the Liberal Party out.

“Once you do that you are handing government to the Labor Party.”

Howard has a particular affection for Frydenberg, who he has known for 20 years. He describes him as a politician of “exceptional ability.” Kooyong is Menzies’ old seat and some of the home videos in the documentary were shot in the electorate, on the front law of the Menzies historic family home in Kew.

Two recent polls using different methodology – once conducted by RedBridge for teal candidate Monique Ryan and one conducted by YouGov for The Australian newspaper – both indicate that an election held today would result in Frydenberg losing Kooyong to Ryan.

“I talk to Josh regularly and I will certainly be paying his electorate a visit between now and polling day,” Howard says. “I think Josh will win, but he is not a fool. He understands that he has got a fight. It is a different kind of fight but the danger is there.”

The Menzies Movies premieres on FOXTEL on Wednesday, 18 May at 7.30pm AEST.

Cut through the noise of the federal election campaign with news, views and expert analysis from Jacqueline Maley. Sign up to our Australia Votes 2022 newsletter here.