Serving up tennis tips! Kate Middleton and Sir Andy Murray join a video call with London schoolchildren to mark what would have been Wimbledon finals weekend

Duchess of Cambridge joined Sir Andy Murray for a video call with schoolchildren to mark what would have been Wimbledon finals weekend.

Sir Andy, who shares three children with wife Kim Sears, admitted he has found home schooling ‘difficult’ and said it has been a challenge to find creative activities to keep the family entertained.

Kate has previously spoken of how she and Prince William have spent a lot of time outside in the garden at their Norfolk home of Anmer Hall with children Prince George, six, Princess Charlotte, five, and Prince Louis, two. 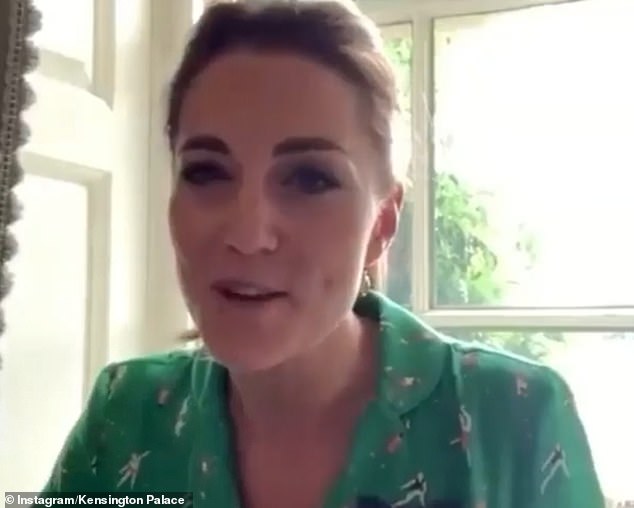 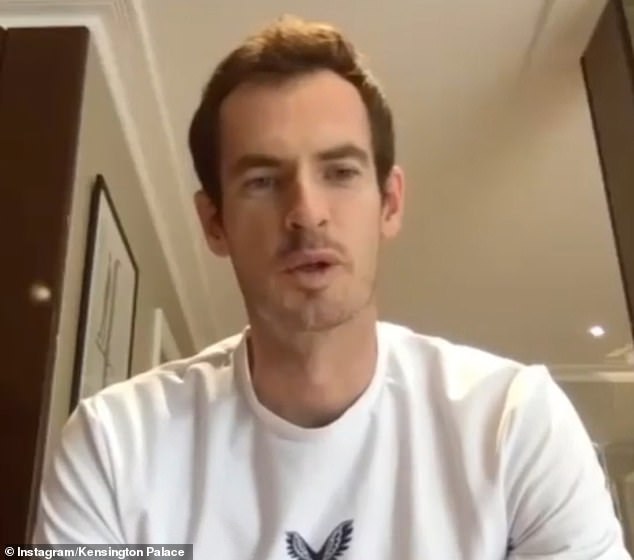 Sir Andy, pictured on the call, who shares three children with wife Kim Sears, admitted he has found home schooling ‘difficult’ and said it has been a challenge to find creative activities

The Duchess, wearing a £665 dress printed with tennis players, surprised the children with Sir Andy as a special guest, interrupting her virtual royal visit to disclose that she had someone waiting on the line.

Asking the children to guess the visitor, Kate said: ‘I’ve got a very important person here that’s going to come and join us, that would love to meet you guys and might be able to share some tennis tips as well with you.

‘I’ll give you a few clues and see if you can guess who this special guest might be.

‘So he … is a he. He plays tennis for Great Britain. He’s a two-time Olympic champion. He’s a former World Number One… Can you possibly guess who this might be?’

One boy piped up ‘Andy Murray’, followed by a round of applause as the former Wimbledon champion appeared on the screen.

Sir Andy, who would usually have been playing at Wimbledon this week, went on to answer questions from budding tennis players, disclosing he was missing big matches, friends and family, but passing the time with home schooling and a new hobby of road cycling.

The Duchess briefly turned interviewer, asking father of two Sir Andy about his lockdown experience and whether he had kept up with training. 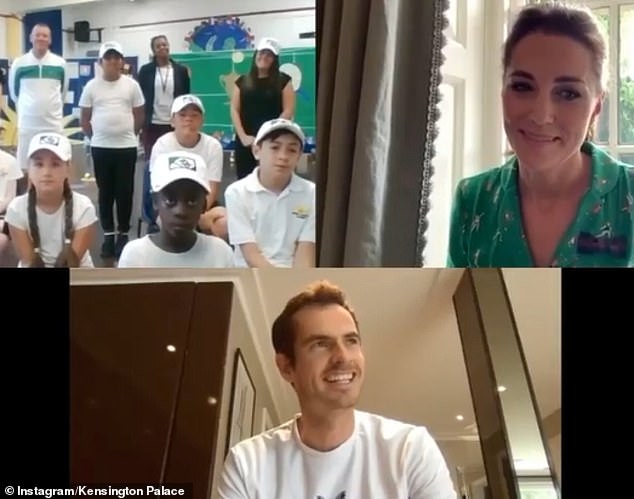 The Duchess surprised the children with Sir Andy as a special guest, interrupting her virtual royal visit to disclose that she had someone waiting on the line. Pictured, on the call

Saying he found the first five or six week manageable, he admitted he had ‘started to find it probably a bit harder to find things to do for the kids, to stay creative with ideas and games for them to enjoy.

‘We’re doing the home schooling which is difficult. It was difficult but at times I really enjoyed it as well,’ he said.

He did not play tennis for around ten weeks, he said, instead staying in shape with cycling.

‘I was going out on my road bike which was something I’ve never done before, so that’s something kind of new that I learned I enjoy during lockdown,’ he added. ‘It’s quite important in these times to stay as active as you can because it good for the mind as well.’

The Duchess told him: ‘There’s lots of budding tennis players here at Bond Primary School as well. Have you guys got any questions you want to ask Andy?’

The youngsters and coaches asked why he picked tennis as a career, whether he remembered his first tennis match and comebacks from difficult times, with Sir Andy speaking of the importance of having good family and friends around him to help ‘moving forward and working hard through setbacks’.

‘And Andy, have you got any tips for these guys if they want to take up tennis a bit more professionally?’ asked Kate.

‘If you’re competing or playing any matches, try really hard in them.

‘If you do go on to choose it as your career obviously the winning and losing changes a bit.’

Asking the children about their other favourite sports, the Duchess and Sir Andy laughed as they animatedly shared their favourite football teams of Chelsea and Tottenham.

Before she said goodbye, the Duchess asked Sir Andy whether he had been missing matches.

He said: ‘I think missing the big competitions, because I’m getting old for a tennis player – you never know how many opportunities you’re going to have left to play the biggest competitions. So missing Wimbledon this week is obviously a shame.

‘I’ve missed the travelling…missing seeing friends like everyone else. Family, I’ve not seen my mum and dad for a few months so i’m looking forward to seeing them again hopefully very soon.

‘There’s been some challenges but I guess sometimes when you go through difficult moments like this you learn to appreciate the things you maybe took for granted sometimes?

‘I’ll definitely make sure I spend more time with my family and friends when I get the opportunity.’

‘Exactly,’ the Duchess replied. ‘And hopefully that time is relatively near as well.’

The Duchess, sitting by a picturesque window at her home in Norfolk, made the ‘royal visit’ in her role as Patron of the All England Lawn Tennis and Croquet Club (AELTC), speaking to students from Bond Primary School in Mitcham ahead of what would have been the final weekend of The Championships, Wimbledon.

She has previously visited the school in January 2018 to see the work of the Wimbledon Junior Tennis Initiative, the AELTC’s community tennis programme, which sees coaches deliver free tennis sessions to school children in the boroughs of Merton and Wandsworth.

Appearing at the end of the children’s tennis lesson with AELTC Head Coach Dan Bloxham, the Duchess asked them about their time in lockdown and whether they have missed their friends, hearing about their new school regime of social bubbles.

One instructor said the children had been ‘on fire’ in training that day, with the Duchess asking ‘What sort of things have you been learning?’

Shown one of the drills, which involved young players running quickly on the spot, she said: ‘Fantastic! That’s very important for your footwork isn’t it?’

Speaking slowly so she could be heard over a short time delay, she asked: ‘Have you all missed doing lots of physical exercise and things during lockdown? What sort of things have you been able to do?’

She went on to empathise: ‘It’s really hard isn’t it, to keep that self-motivation going. It’s very impressive you’ve kept that training going.’

Hearing about the best bits of watching Wimbledon, she added: ‘They [players] show great sportsmanship as well. I think tennis is brilliant for that, especially Wimbledon.’

This year’s Wimbledon Fortnight has not gone ahead due to the Covid-19 pandemic.

The AELTC has instead run ‘Wimbledon Recreated’, a campaign to promote Wimbledon, tennis, and sport through coverage of archive matches.

In addition to £1.2m in donations from the Wimbledon Foundation to local and national charities, the AELTC is also delivering hot meals to the local community, distributing strawberries to local hospitals, providing towels to the homeless through the charity Crisis, and tennis balls to clubs across the country through the LTA.