Ledecky clocks slower time than Titmus but was the American star foxing?

The mind games have officially begun between Ariarne Titmus and Katie Ledecky. Or have they? After both completed their 400 metre freestyle Olympic trials in vastly different styles, the picture in Tokyo is no clearer as the Australian rising star readies herself to face Team USA’s revered champion.

If you simply take times at face value, Titmus will be installed as favourite. In reply to her blistering time of three minutes and 56.90 seconds in Adelaide, the second fastest in history and just outside Ledecky’s world record of 3:56.46s, Ledecky’s return of serve was … subdued. 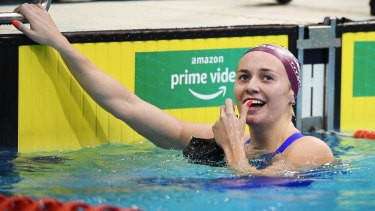 In Omaha, with no real competition in the other lanes, Ledecky rolled the arms over for a leisurely 4:01.27s to book her spot in the race for Tokyo. By her ridiculous standards, it was the equivalent of knocking around a few balls on the driving range before the tournament.

“Very much a blur,” Ledecky said afterwards as she went out fast through 200 metres but couldn’t sustain her customary relentless splits. “I thought I could go a little faster than that, so I’m a little surprised. But I’ll take it for now.”

What does it all mean? Ledecky has barely acknowledged Titmus in the past, or even this week, and this seemed every bit an alpha move to ensure she keeps her cards closely guarded ahead of the Games. In a perfect world for Ledecky, the young Australian would go in as the favourite, carrying all the pressure and expectation, while Ledecky has the pedigree and results already in her keeping. 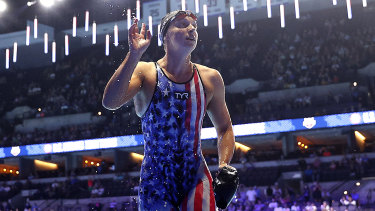 Katie Ledecky after competing in the 400m freestyle final at the US Olympic trials.Credit:Getty

But as the Games near, Ledecky’s stature and importance to the US team will see her become one of the faces of the NBC coverage, which will saturate American televisions. NBC had the IOC move the swimming finals so they fit into a prime time slot.

With the mass of the American media on her back, Ledecky will and should start favourite. And given no Australian woman has won an individual Olympic gold since Stephanie Rice in 2008, that narrative shouldn’t change until someone like Titmus can deliver when it counts.

Her animated coach, Dean Boxall, said Titmus’ 400m trials swim shouldn’t be interpreted as a message to Ledecky, the Americans or anyone else around the world. Instead, it was validation for Titmus as she tries to set aside a shoulder setback that many in Australian swimming circles felt could sink her gold medal hopes entirely.

“There still is [doubt]… but this is Ariarne Titmus version 2.0,” Boxall said. “She’s matured but I didn’t expect that. The girl likes work and finally over the past six weeks she could really get down and do that hard work in the pool. She thrived in that situation but she still had a flare up with the shoulder. But she has evolved.

“This wasn’t about a message at all, this was about Arnie thinking she could feel it and do it after a very challenging 12 months. She’s dealt with a lot but we have good runs on the board now.

“This wasn’t a message to Katie, this was a message to Arnie. She needed that, she needed a great swim. We didn’t expect that sort of speed but that will be great for her confidence.”

The dynamic between the pair – and Australia and USA as swimming nations – will be fascinating on the run in to Tokyo. The Americans never lack for confidence and already, their star breaststroker Lilly King has said they can win every single gold medal in the women’s events.

That won’t be happening but it speaks volumes about the swagger with which the Americans take into the major meets. There’s a good reason; they usually get it done. That’s something the Dolphins haven’t been able to really achieve over the past two Olympics.

Titmus and other fearless young stars like Kaylee McKeown could be the ones to turn that narrative on its head. For now, Ledecky remains the queen of the 400m and for Titmus, the path to greatness leads directly to dethroning the American superstar.

Sports news, results and expert commentary. Sign up for our Sport newsletter.

Most Viewed in Sport