Home » Lifestyle » Life on the ocean wave was a floating HELL!

Life on the ocean wave was a floating HELL!

Life on the ocean wave was a floating HELL! Limbs left shattered by accidents. Disease and malnutrition rife. Death stalking the decks. No wonder the wretches press-ganged to join the Navy became ‘stupefied savages’

BOOK OF THE WEEK

SONS OF THE WAVES

Apart from a brief cameo appearance by Admiral Nelson (‘a leader of unique qualities’), officers and gentlemen do not feature in Stephen Taylor’s engrossing study of the ‘heroic age of sail’.

His concern is not with policy-makers and strategists, but the ordinary and anonymous mass of sailors — 128,930 of them by the year 1800, 48 per cent of whom were enduring a life on the ocean wave thanks to the press gangs.

Forcible recruitment — or ‘impressment’ — was the forerunner of compulsory conscription, and had official backing. 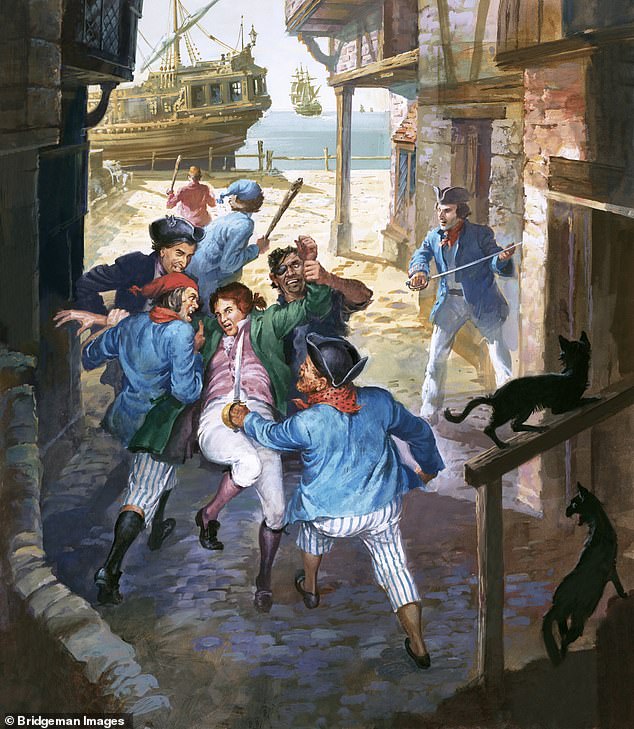 Stephen Taylor reflects on the ‘heroic age of sail’ in a fascinating new tome. Pictured: Sailors going wild in port

‘Knife-grinders and street-singers, bird-dealers and shoemakers, hawkers of prints and sellers of herring’, all could find themselves bundled off aboard one of His Majesty’s ships.

Ragamuffins, or ‘distressed orphans’, were also scooped up by the authorities to become cabin boys or ‘powder monkeys’, carrying ammunition from the hold to the ship’s artillery.

In truth, some men grew to prefer a sailor’s life to one of poverty in the cities. ‘I was young, did not fret much, and was willing to go to any part of the world,’ said one of Taylor’s witnesses — the author has examined ships’ logs, Admiralty records and court-martial proceedings.

There was always the hope that a person might venture to ‘lands of outlandish peoples and mystifying customs’ and return home bearing fabulous tales of, for example, alligators, ‘the shape of a newt but large and voracious, so as to kill and eat a man in a very short time’.

Mostly, however, for the sailors toiling below decks or up in the rigging, their existence was a ‘hellish floating torment’.

Every hour of the day the masts needed maintaining, the sails required mending, the decks had to be scrubbed. The men adjusted the canvas, ‘often in peril or great haste, to suit challenging conditions’.

The sails had to be hauled in when the wind became excessive, and often they were shredded to pieces. The masts would vibrate and bend like the boughs of a tree. There were no safety harnesses. Sailors manoeuvred themselves courageously along swaying footropes.

Fatalities were frequent, men plummeting to their doom. The dead were sewn into a hammock and flung overboard. ‘As a precautionary measure, to ensure he was really dead, a final stitch was passed through the nose.’ If battle commenced against the Spanish, Dutch or French, ‘all was thunder and smoke’, and the shot and splinters cut people into a pulp. The decks, we are told, would be awash with ‘carcasses, entrails and dismembered limbs’. 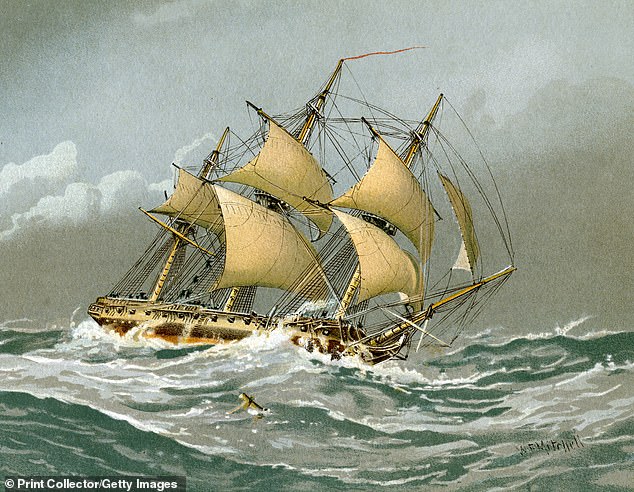 Stephen said in the absence of food, sailors would eat grass, drink their own urine and attempt to cannibalize the bodies of dead shipmates. Pictured: A Royal Navy 28 gun frigate

More sailors died from fevers and accidents, however, than in war. Living conditions were cramped and insanitary, the men’s quarters ‘atrocious, damp, stinking with disease and bodily effusions’.

Malnutrition was rife. For months at sea, the diet was oatmeal porridge, salted meat and biscuits, unrelieved by fresh produce. Hence, before the discovery of the vitamin properties of citrus fruit, the epidemic of scurvy, where ‘people’s minds became as loose and unsteady as their teeth’.

Discipline wasn’t only strict, it was tyrannical. Captains, a law unto the themselves, ordered frequent floggings. Aboard one ship in 1797, during a voyage to the West Indies lasting 38 weeks, 1,392 lashes were handed out to a crew of 160. No wonder there were mutinies, though no one on The Bounty resembled Marlon Brando. The aggrieved sailors were ‘unkempt, snaggle-toothed and bow-legged,’ says Taylor. Nor did any Englishman find paradise if they deserted or were shipwrecked in the South Seas. ‘In the absence of food, they ate grass, drank their own urine and attempted cannibalising the bodies of dead shipmates.’

However, as Taylor says, the ‘wealth, strength, security and glory of Britain’ during our era of Imperial glory was down to the might of the Royal Navy. 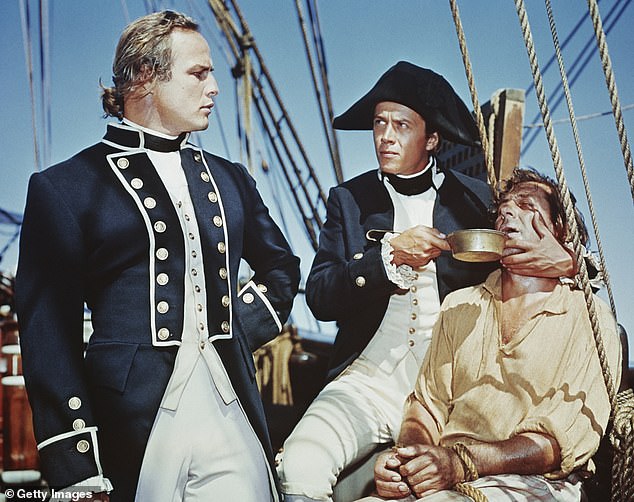 Stephen claims ‘fornication went on relatively discreetly’ behind the cannon, when a woman came on board. Pictured: Marlon Brando as Fletcher Christian in Mutiny on the Bounty

It’s a wonder the enterprise ever came together, as the actual men, the humble ratings, were treated like slaves. The rate of pay of £12 per annum established in 1653 did not change for 150 years, a grievance sparking the mutinies in 1797 at Spithead and Nore. Agitators were quickly jailed, flogged and hanged from the yardarm.

The only solace was alcohol. Drunkenness was encouraged by generous rations: a gallon of beer, a pint of wine, or half a pint of rum a day. It was as if they were encouraged to become stupefied savages.

They always went wild in port. A sailor would ‘eat, drink, cavort and fornicate like a lord’. When women came on board, ‘fornication went on relatively discreetly’ behind the cannon. (Nelson’s Lady Hamilton is described as ‘an overweight, blowsy seductress, full of animal magnetism and an armoury of attention-seeking skills’, more Hattie Jacques than Vivien Leigh.)

Sailors, said Daniel Defoe, ‘swear violently, whore violently, drink punch violently’. If they were to be feared, ‘celebrating, fighting or dying in the streets of London, all too often knife in hand’, it may have been because the Navy’s origins in Tudor days lay in lawless buccaneering and piracy. 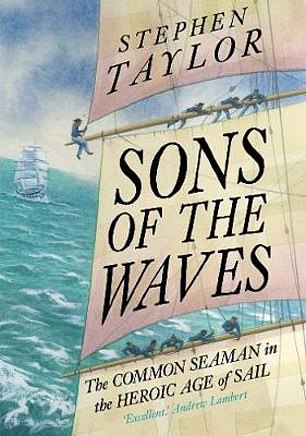 Francis Drake, searching for trunks of gold and pieces-of-eight, had with Queen Elizabeth’s blessing been ‘setting sail for distant profit’. His successors’ official task, in the late 17th and early 18th century, was ‘to annoy and distress the Spaniards by taking, sinking, burning or otherwise destroying all their ships’.

Until the slave trade was abolished in 1807, it was one of the fleet’s most lucrative operations. There was sugar to be shipped from the Caribbean to Liverpool and Bristol, convicts to transport to Australia, exports to be traded from India, where British sailors found the curries ‘very disagreeable to uninitiated palates’.

The contrast between the splendour of the actual oak ships, ‘the great cathedrals of 74 guns and more’, and the fate of the shabby crews manning them, was to remain marked.

When sailors were discharged or invalided out, there was little provision. Veterans would congregate at Greenwich, hoping for alms: ‘mutilated creatures, some clean and decently apparelled, some dirty and almost naked. Some have lost an eye; some have a hand, some an arm off; some with wooden legs.’ Many were reduced by starvation to begging.

This account of ‘the heroic age of sail’, which ends before the switch from sail to steam at the beginning of the Industrial Revolution, is suffused with ‘a dark Dickensian melancholy’. Instead of reform, there was the coldness of charity.

The Destitute Sailors’ Asylum was founded in 1827, two decades after the death of Nelson at Trafalgar. Disability pay came in four years later.

The ‘sons of the waves’, who gave their all for British prosperity and expansion, might receive up to two shillings a day — that’s about £7 in today’s money.